Either way, every one of the 49 Northwest Trek staff, interns and volunteers that gathered for the twilight Bat Counts on June 28 and July 5 was vital. Armed with data sheets, click counters and plenty of comfy chairs, the bat counters were helping the wildlife park study its native population of bats – a study that in turn is crucial to helping scientists better understand and protect these tiny mammals.

Plus, it’s becoming a Trek tradition.

I slumped back down onto the fleece blanket and resumed a kind of mesmerized staring at the bat box I’d been assigned to. It was 8:50pm, still 18 minutes short of sunset – the magical moment when bats prefer to dash out of their roosts to hunt for the night. But we’d been instructed to watch from half an hour beforehand, just in case, and there were only three of us responsible for counting this roost. So we waited. And waited.

The Great Trek Bat Count is actually two counts, over two nights in late June/July. Volunteers and staff gather near the park entrance while it’s still light to receive instructions and equipment: a pen, a sheet for recording data, and (if they need it) two clickers – one to count bats leaving the roost, and one to count those that may fly back inside. (The latter is subtracted from the former, to avoid a double-count.) Some folks opt for a phone app instead, and Zachary Hawn, conservation engagement coordinator at sister zoo Point Defiance Zoo & Aquarium, also brings an Echo Meter, a recording device plugged into a tablet to help ID bats from their echolocation clicks, which are inaudible to the human ear.

Forewarned, everyone also comes armed with camp chairs, cushions and fleeces, ready for up to two hours of bat-spotting.

“All right, everyone,” calls Rachael Mueller, Trek conservation engagement coordinator and the Bat Count leader. “There are several locations around the park where our bats like to roost, so I’ll be dividing you up between them. Are there any questions?”

“What if a bat lands on me?” asks Wesley, a nine-year-old who’s volunteering for the first time with mom Jennifer.

“Oh, they won’t,” reassures Rachael. “They just want to fly off and hunt.”

Wesley looks both disappointed and relieved.

Small groups start heading off for the veterinary clinic and tram barn, where bats love to roost in the eaves, while others disperse around the center of the park to watch the slim green custom-built bat boxes hanging around 25 feet up in the trees. The last group sets up camp right in front of the exit gates, where the largest bat colony has found a home in the roof space over the ticketing office.

Evening settles onto the forest. With no human noises to distract, I suddenly become acutely aware of birdsong, insect hums, the trickle of the stream. Swatting at the occasional mosquito, I stare at the green bat box as the light slowly fades from a golden summer sky. My breathing slows, as do my thoughts.

It’s a bit like forest meditation, only I can’t close my eyes – bats are swift and small, and I don’t want to miss them.

It’s 9:08pm – sunset. Nothing. A waft of summer scent washes over me, green and grassy, as if the forest is exhaling. I swat another mosquito, check my phone. The park’s gray wolves start howling, and it’s a little bizarre to realize that just a few hundred feet away from me there are two grizzly cubs falling asleep.

9:18pm. Nothing. The birds wind down their chorus. 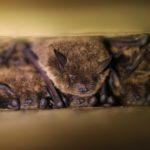 Then suddenly a tiny dark shape drops out of the box and flits away into the shadows, so fast I almost don’t believe my eyes. But next to me, my fellow counters are clicking, so I do too. Then there’s another bat, and a third. I sit up, eyes peeled, finger poised.

And then nothing. Ten more minutes of nothing. Mueller asked us to stop the count after five minutes of inactivity, so we pack up our chairs and wander quietly to the exit breezeway, where things are just a little different.

“95, 96, 97,” clicks the phone counter of the volunteer on the right side. The one on the left is ahead by 20. They stare at the entry points overhead with the intensity of soccer fans at a World Cup penalty shootout. Tiny bats are dropping and flitting in twos and threes, and when I peer up inside, the red night-light illuminates a whole colony of the little creatures, climbing around like miniature dragons, zooming back and forth and twittering to each other in high-pitched communication. It’s a window into another, Lilliputian world, and I feel enormous and somehow irrelevant, like Gulliver.

But by the end of the night, it’s clear that we humans are far from irrelevant to these astonishing animals who pollinate much of our food and eat the bugs that would otherwise invade us.

Overall, we’ve counted 455 bats: 270 from the exit, 74 at the tram barn, 53 at the vet clinic and 58 from all the bat boxes. The following week, a whopping 673 bats were counted, with 557 alone at the exit breezeway. Possible species include Yuma myotis, little brown myotis, California myotis, silver-haired and hoary bats, still to be confirmed from the Echo Meter recordings.

That’s a huge colony by Western Washington standards, one of the largest known in Pierce County. It’s also a healthy colony, having just been tested negative for any presence of the white-nose syndrome that has been wiping out bat colonies in eastern states.

Which is why our hours of waiting and counting are so vital – including my three bats. By learning more about how Northwest Trek bats live and thrive, scientists can better understand how to protect the entire species from threats like white-nose syndrome and loss of habitat.

Next time, though, I’m requesting a battier location.

Previous Article
Next Article
labels:
You Might Also Like
Bat Science
Northwest Trek Wildlife Park and Washington Department of Fish and Wildlife (WDFW) are partnering with scientists from Wildlife Conservation Society Canada (WCSC) to test the effectiveness of a promising new bat-saving treatment to help wild bats survive the effects of white-nose syndrome. White-nose syndrome has killed millions of hibernating bats in eastern North America and was first discovered in Washington in 2016. State wildlife officials have confirmed white-nose syndrome in King, Chelan, Kittitas, and Pierce counties. The fungus that causes white-nose syndrome has also been confirmed in Lewis, Mason, Snohomish, and Yakima counties. “If this innovative probiotic spray is effective, …
Learn More
Protecting Bats
You could say we’re a bit batty for bats at Northwest Trek. We appreciate what bats offer our ecosystems — and because of that, we work hard to protect them. Northwest Trek is home to one of the largest wild bat colonies in the South Puget Sound region. The bats roost under the eaves of many of our buildings and around the wildlife park, including in all the bat boxes we’ve put on trees. Protecting bats is important Bats keep us all healthy. Pacific Northwest bats are insectivores, consuming their own body weight in bugs every night. If we didn’t …
Learn More
Holy Pest-Control, Batman!
It’s true – bats have a bad rap. They’re best buddies with Dracula and have a cameo in “Macbeth.” They inspire spooky Halloween decorations. And if we’re not careful, we ourselves could become “batty.” They can carry viruses, including (most notably) the coronavirus that spread to humans from wildlife markets as Covid-19. But then there’s Batman. And those of us who know bats – like here at Northwest Trek and Point Defiance Zoo & Aquarium – know that they truly are the superheroes of the night: zipping effortlessly in the dark using echolocation or cutting-edge wing design, munching their own …
Learn More
Bat Science at Twilight
As pink sky slowly darkens behind tall trees, six scientists stand motionless outside the veterinary clinic at Northwest Trek. Only a robin’s chirp pierces the cool air. All eyes are fixed on the clinic’s overhang roof, straining to see through the shadows. They’re waiting for the appearance of a tiny creature that’s often misunderstood, yet is vital to human health, and is now in danger from a deadly disease. They’re waiting for bats. 6:00 p.m. Scientists Michelle Tirhi and Abby Tobin arrive at Northwest Trek, and start scouting bat roosts with Trek staff: conservation engagement coordinator Rachael Mueller, veterinary technician …
Learn More
The Great Trek Bat Count
The mission began at sunset. After a quick briefing to receive assignments and equipment, 26 staff and volunteers spread silently out to their locations. In the entrance breezeway, near the tram garage and underneath trees, they hunkered low on the ground as darkness grew. They waited, breath hushed. And then, with a chattering and creaking overhead, the mission began: The Great Trek Bat Count of 2018. As bats began to fly out from their roosts into the night to hunt, the humans sitting quietly below them began to click their counters, one for each outgoing bat. One staff member had …
Learn More
See All Articles