Come into the cozy warmth of the Cheney Discovery Center – behind Kids’ Trek – and encounter a tiny new world. Discover reptiles like the gopher snake, amphibians like the Western toad, and gastropods like the banana slug, king of slimy invertebrates. 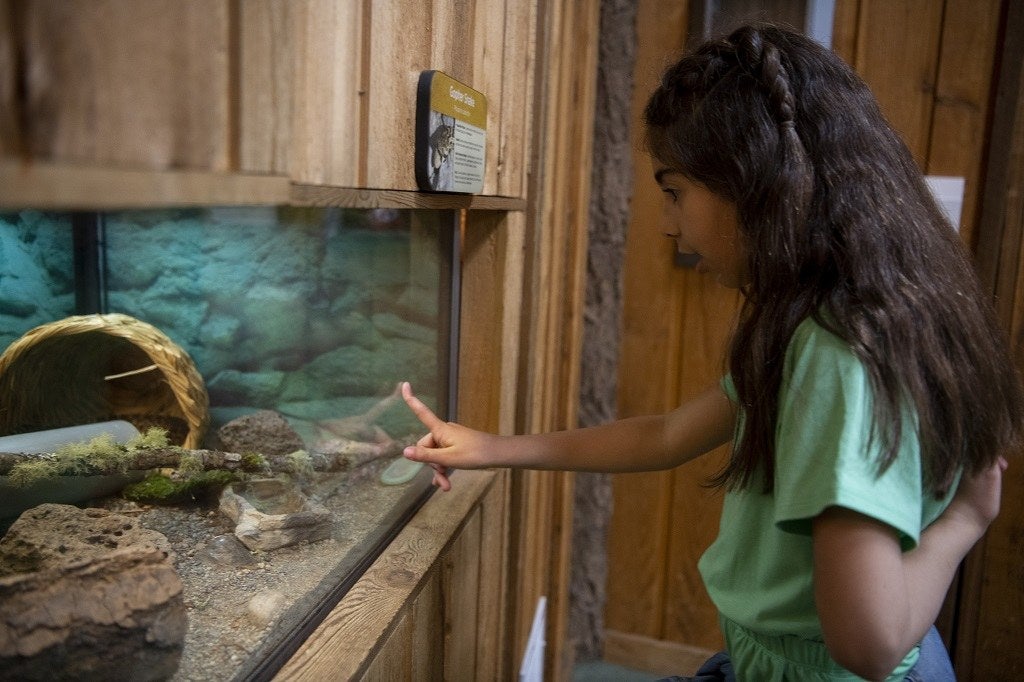 While the animals are fun to watch, there is plenty more to do in the Cheney Discovery Center! Grab a book and enjoy the reading nook, play in a puppet theater, visit the activity table with games and puzzles and more. While the center is good for all ages, the activities are best suited for children ages 3-8. Learn while you play: an on-site naturalist or volunteer will be available to answer questions about any of the animals in the wildlife park. 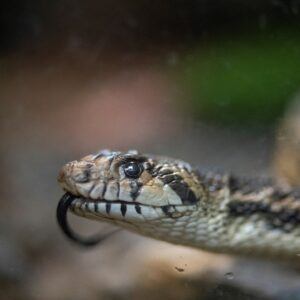 WHAT: The Pacific gopher snake is beige to light brown, with brown to black blotches covering its body and a dark band across its head.
WHERE: Mountains to lowlands, dry deserts to open conifer forests across the U.S.
SIZE: 2.5-7 ft.
EATS: Small to medium rodents, birds, chicks, eggs and other reptiles.
BABIES: Breeding from March-May results in 2-22 eggs laid in August. Hatchlings appear in late fall after a 50-85 day incubation.
STATUS: General: Common. Washington: State monitored.
FUN FACTS: The gopher snake is a good tree climber that actively searches for prey in burrows, dens and rocks.
When alarmed, it coils into an S-shape, hisses loudly and vibrates its tail rapidly on the ground to mimic a rattlesnake. 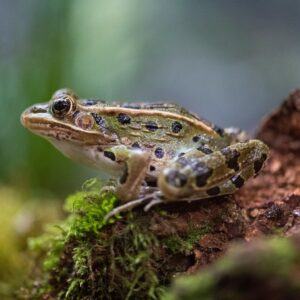 WHAT: The northern leopard frog is a smooth-skinned green, brown, or sometimes yellow-green frog covered with large, oval dark spots, each of which is surrounded by a lighter halo.  Their underside is white as well as the strip on their upper jaw.  The northern leopard frogs have ridges that start behind their eye and run down their back that can be lighter in color.
WHERE: The northern leopard frog range includes the states that border canada and the southern Canadian provinces.  The last known population of northern leopard frogs in Washington occupies the North Potholes Reservoir Unit of the Columbia Basin Wildlife Area in the Crab Creek drainage. This area has been designated the Northern Leopard Frog Management Area (NLFMA). This species has experienced range-wide declines throughout the western states and Canada. Historically, northern leopard frogs were found throughout eastern Washington, and 17 occupied sites were recognized throughout the Columbia, Crab Creek, Pend Oreille, Snake, Spokane, and Walla Walla river drainages.
SIZE:  2 – 4.5 in
EATS: Adults forage predominately for insects in moist areas.  Tadpoles forage mainly on algae and detritus.
BABIES: Breeding season is March to June, depending on temperature and elevation.  Eggs are laid in tight masses and many frogs will lay their eggs together in calm shallow water.  Eggs can hatch in just a few days.
STATUS: Uncommon/WA State: Endangered
FUN FACTS: The northern leopard frog is experiencing threats from habitat loss, disease, non-native species, pollution and climate change that individually and cumulatively have resulted in population declines, local extinctions and disappearance from vast areas of its historical range in the western U.S. and Canada. 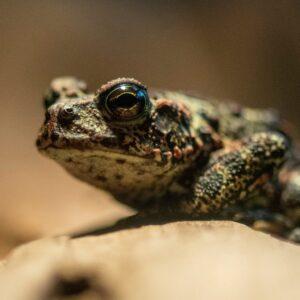 WHAT: Western toads are generally large with oval shaped parotid glands located behind the eyes. Colors range from gray to green, with a bright light-colored stripe down the middle of the back. “Warts” are tinged with red and surrounded by black blotches. Males have a pale throat.
WHERE: Western toads are found along the Pacific Coast from BC, Canada to Baja California and in non-arid areas of the Western half of the US.
SIZE: Up to 2 in (5 cm)
EATS: The diet consists of insects and other small invertebrates.
BABIES:  Breeding starts in mid-April at low elevation sites in western Washington and in late April or early May at low elevation sites in eastern Washington. The male, by using its clasping thumb, stimulates the female to extrude 4000 to 8000 eggs and then fertilizes them externally. The eggs are laid in long gelatinous strings and are deposited in shallow waters. Tadpoles emerge as soon as 3 days after the eggs are laid. The larval stage lasts approximately two months as metamorphism occurs.
STATUS: Federal Species of Concern
FUN FACTS: When frightened, toads can increase their size by inflating air sacs inside the body. This allows toads to wedge themselves tightly in rock walls or burrows, making it very difficult for a predator to extract them. 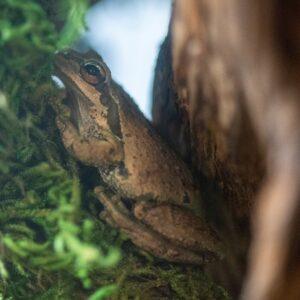 WHAT: Small frog that varies in color, though will have a dark eye strip and rounded toe pads.  Females are larger than male.
WHERE: The Pacific Tree frog ranges from British Columbia, Canada to the tip of Baja California, México and eastward to Montana and Nevada.  They are found in every county in Washington.
SIZE: Up to 2 in (5 cm)
EATS: Insects and spiders.
BABIES: Breeding occurs November to July, commonly it will happen in spring, in water.  The male will vocalize to attract the female to the pool of water.  Females will group eggs together in a jelly like substance they are attached to grasses.  She can lay upwards of 700 eggs in one year.
STATUS: Secure.
FUN FACTS: One of the most fascinating characteristics of this little frog is its ability to change color. Unlike chameleons, which change their color to match their surroundings, the Pacific tree frog changes color based on the air temperature and humidity. The frogs don’t control this change; it just happens naturally within a few minutes. The color change is for exactly the reason you think — a defense mechanism to reduce the likelihood that the treefrog will become a meal for a bullfrog, raccoon, heron, snake, or other predator. 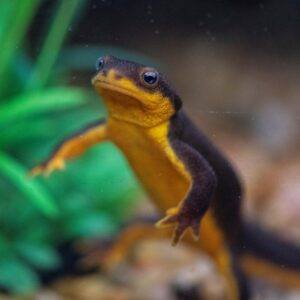 WHAT: A stocky brown salamander with a bright orange to yellow underside, rounded snouts and rough skin.
WHERE: Moist forests, lakes, ponds and wetlands throughout the west coast of the U.S. and British Columbia.
SIZE: 4-7 inches
EATS: Worms, insects and other invertebrates.
BABIES: Breeding at different times depending on location, newts lay single eggs hidden in vegetation. They hatch in 5-10 weeks, and larvae metamorphose when around 1-3 inches.
STATUS: Secure.
FUN FACTS: When threatened, rough-skinned newts arch their heads toward their tails, which reveals their bright orange underside to warn predators that they are toxic.
Newts produce toxin inside their skin, rather than secreting it, so it is most dangerous when eaten. They can be safely handled but wash hands thoroughly afterwards.
Not many vertebrates can survive eating a rough-skinned newt – but the common garter snake is one that can, since the snakes can tell whether the newt’s toxin level is too high to feed on. 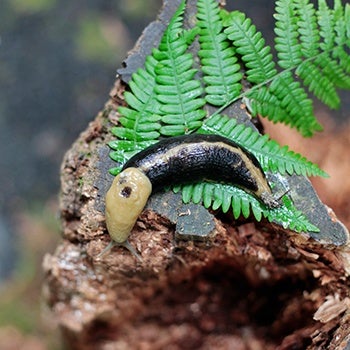 WHAT: Bright yellow, or sometimes green, brown, spotted or white, the Pacific banana slug is the second-largest land slug in the world.
WHERE: Moist forest floors along the Pacific coast.
SIZE: Length 9.8 in.; weight 4.1 oz.
EATS: Leaves, animal droppings and dead plants.
BABIES: Breeding year-round. Slugs are hermaphrodites (can change sex), and after exchanging sperm with a mate they lay up to 75 translucent eggs (hiding them in logs or leaves). Then they abandon the clutch.
STATUS: Common.
FUN FACTS: Banana slugs are decomposers: they eat dead organic matter and recycle it into soil humus.
They especially love eating mushrooms, and spread the spores as they excrete.
They’re slow movers. Banana slugs travel at 6 ½ inches per minute – that’s .006 miles per hour.

The Cheney Discovery Center reopens May 3 at Northwest Trek Wildlife Park and will be open daily from 11am-4pm. The recently remodeled building invites guests of all ages to discover a tiny world of reptiles and amphibians like a gopher snake, northern leopard frogs, rough-skinned newts and more. “There are new species and animals to meet and new educational puzzles and games to play,” said Education Curator Craig Standridge. “We are delighted to welcome guests back into this world of wonder to learn more about the smaller creatures of the Pacific Northwest.” NORTHERN LEOPARD FROGS New in the Cheney Discovery …

Whenever Friday the 13th rolls around, even the least superstitious of us might look askance at a black cat or shiver at an owl hoot. But animal superstitions, although fun, can cause pretty bad luck for the wildlife who cross their paths. After all, we live in a world where 350,000 tourists can visit Scotland in one year just to try and spot the Loch Ness monster. If that same number of people all decided to hunt wolves or support the illegal trade in tiger parts, that would have a devastating effect on some amazing animals who are neither good …

Human athletes might be battling it out for medals at the Olympic Games in Japan this month, but here at Northwest Trek, we have our own incredible athletes to celebrate: our animals! Who can leap the furthest? Climb the highest? Who’s the fastest swimmer, the cleanest diver, the most agile? Check out our “gold medal” list for the winners – we might even have a couple of honorable mentions for effort! Climbing – Mountain goat No contest here: mountain goats are excellent climbers, hence the name. Swimming – Beaver They may not win the speed prize, but anyone who can …