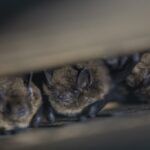 Northwest Trek Wildlife Park and Washington Department of Fish and Wildlife (WDFW) are partnering with scientists from Wildlife Conservation Society Canada (WCSC) to test the effectiveness of a promising new bat-saving treatment to help wild bats survive the effects of white-nose syndrome.

“If this innovative probiotic spray is effective, it could be revolutionary in saving wild bats in Washington and across the country,” said Abby Tobin, WDFW’s white-nose syndrome coordinator. “The disease affects only hibernating bats and does not affect humans, livestock or other wildlife.”

Northwest Trek is home to one of the largest bat colonies in the South Puget Sound region, with over 350 wild bats living in roosts around the wildlife park.

“We love wild bats at Northwest Trek, and we’re excited to participate in this important research study to give them the best chance of survival,” said Rachael Mueller, the wildlife park’s conservation program coordinator.

Northwest Trek is the control site in the multi-year scientific study to research a probiotic spray intended to stop the spread of white-nose syndrome. At four other sites throughout Washington and British Columbia, scientists are spraying a powdered clay that contains probiotic cells into bat roosts. Once bats enter the box, a layer of the dust is then spread onto their bodies and wings.

The spray contains naturally occurring bacteria and fungi that have been found to inhibit the growth of the fungus that causes white-nose syndrome, giving bats a chance to survive through winter. Bats with the disease awaken more frequently during hibernation, which leads to them burning through the fat reserve they need to survive.

On a recent summer evening, staff and volunteers gathered at the entrance to Northwest Trek where a bat colony lives, with the goal of gently capturing and analyzing dozens of bats. 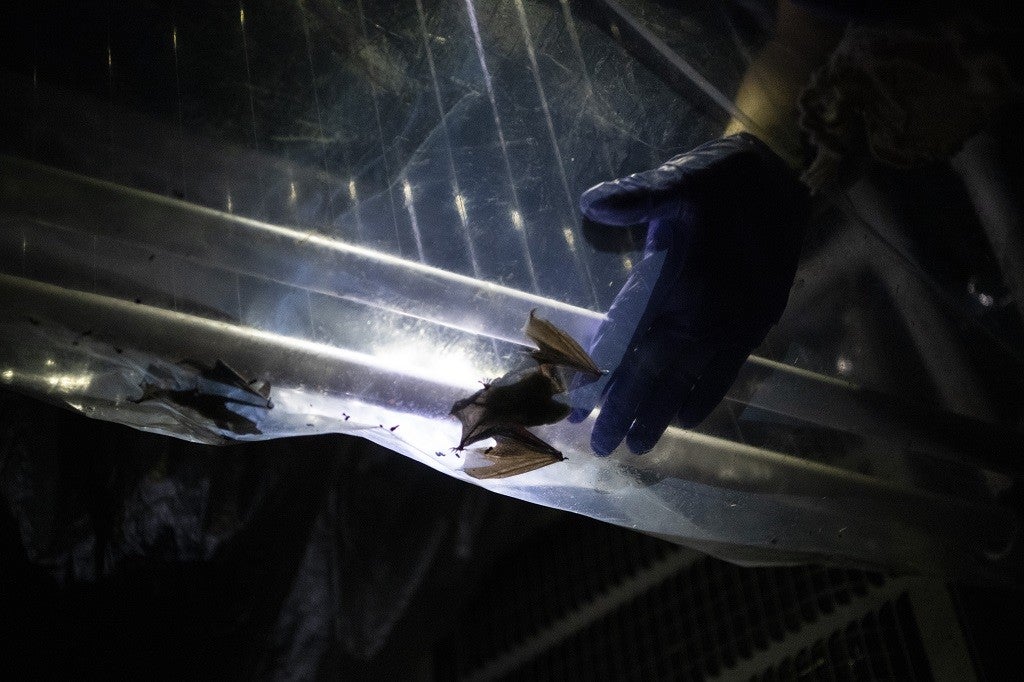 Just after sunset, the bats began to swarm. Many ended up in a specially designed harp trap where rabies-vaccinated researchers and volunteers quickly scooped up the bats before taking them to a nearby table to carefully examine them. They checked the bats’ weights, wing lengths, sex, and pregnancy status (researchers focus their work on maternity roosts). The bats then were tagged with a tiny electronic microchip, similar to microchips inserted into the skin of a pet. 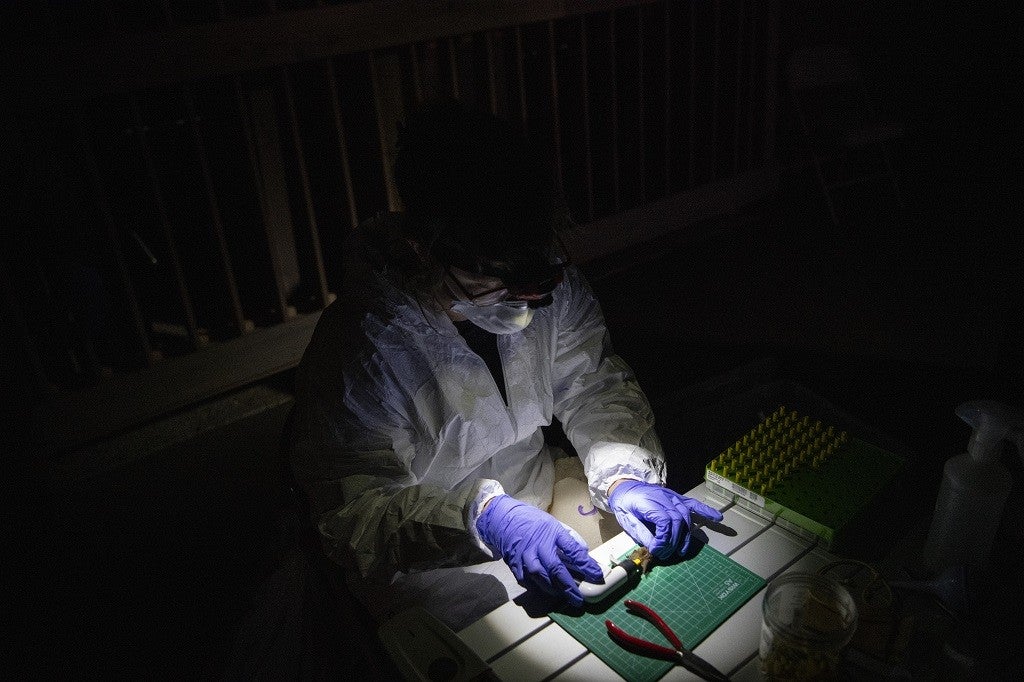 Passive integrated transponder (PIT) readers installed at bat roosts throughout the wildlife park then collect data when a tagged bat goes by. There are similar readers at other sites throughout Washington.

“The microchips allow us to track the bats to learn if they are surviving year after year even with white-nose syndrome,” said Tobin. “We are data-deficient in that area and having that knowledge could inform how we protect bats.” 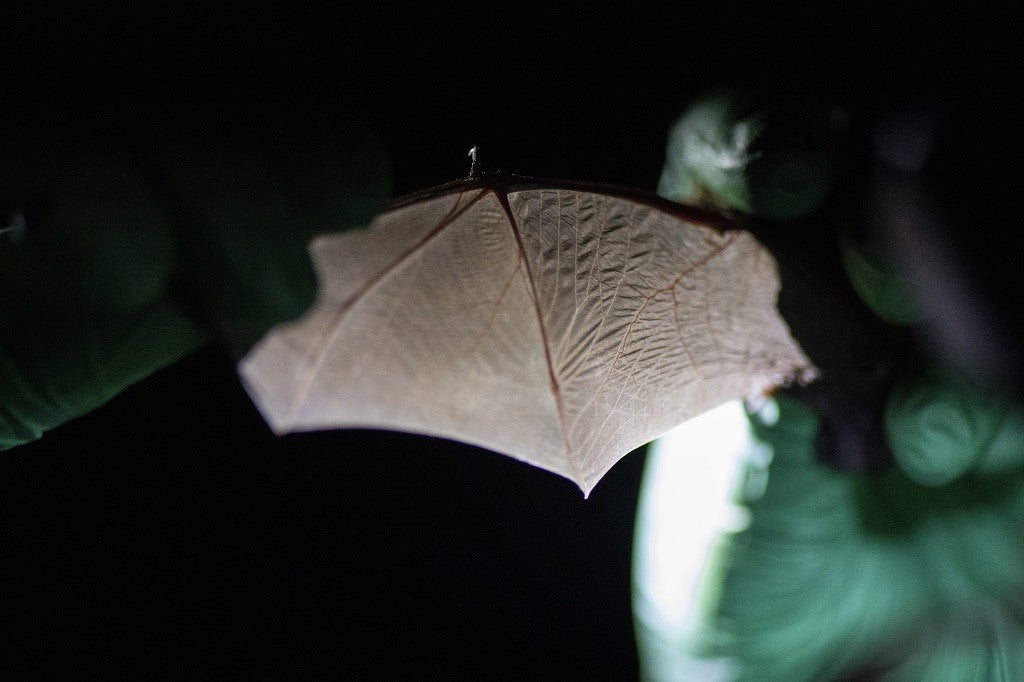 Researchers believe bats in western North America likely don’t hibernate in large colonies like they do in the east (it is unknown where they hibernate), slowing the spread of the disease. 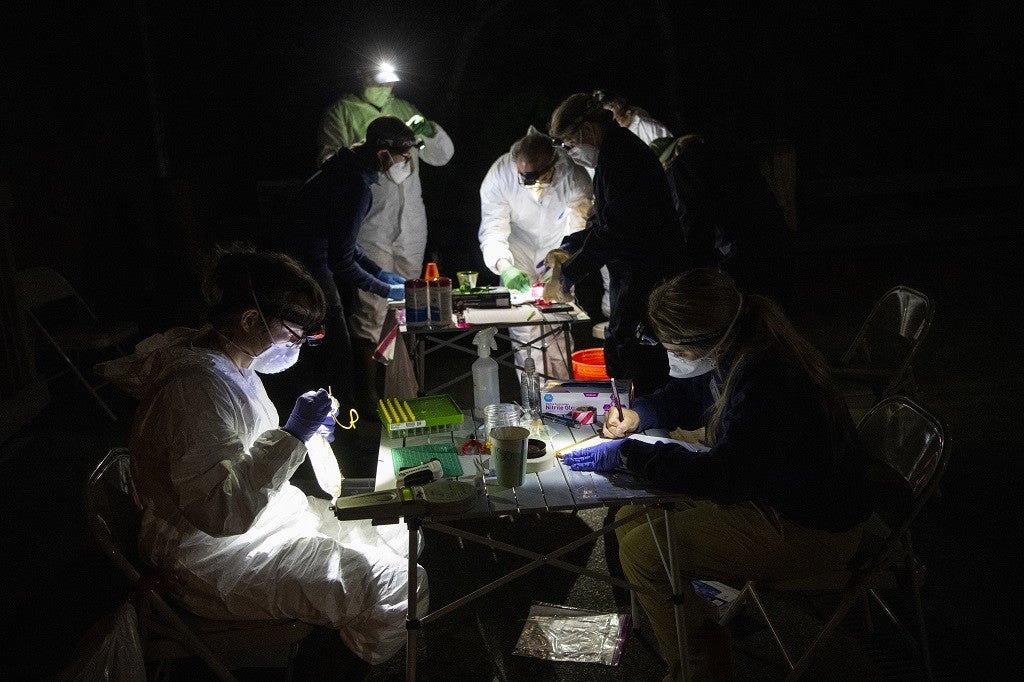 “This scientific study will also be a good monitoring program for bat health in Washington,” said Leah Rensel, WCSC bat biologist. “The project will provide in depth data about bat behavior that is largely unknown in Washington.”

Other major partners in the multi-year research study include McMaster University and Thompson Rivers University. 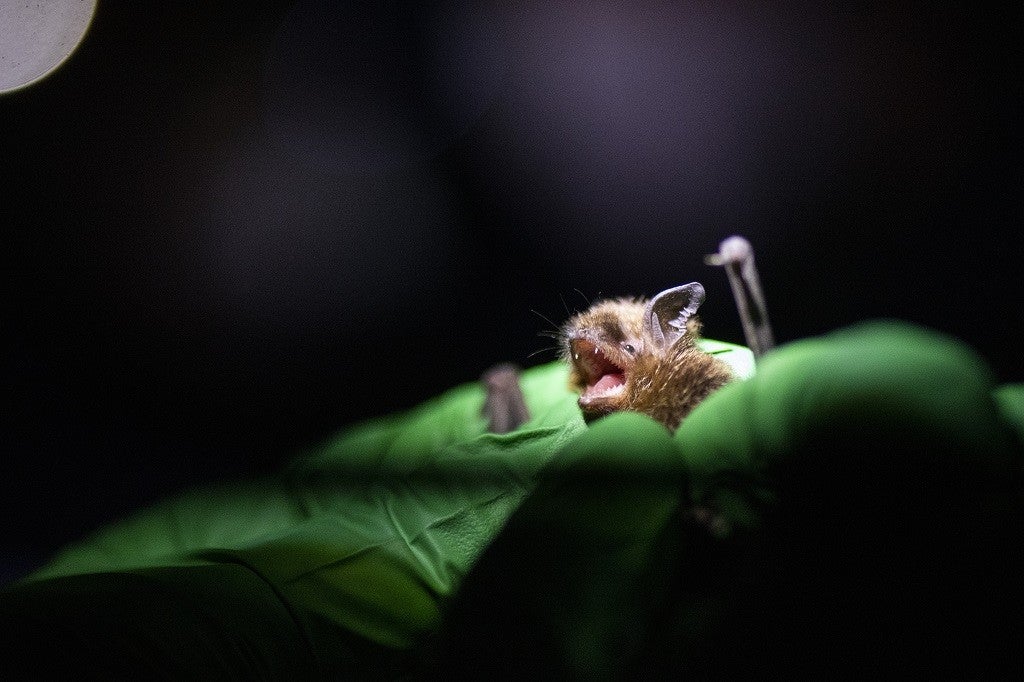 “Bats are amazing animals and play a vital role in our ecosystem, eating enormous quantities of mosquitos, flies and other insects every night,” said Mueller. “We need to do everything we can to protect them and ensure they continue to thrive in Washington.” 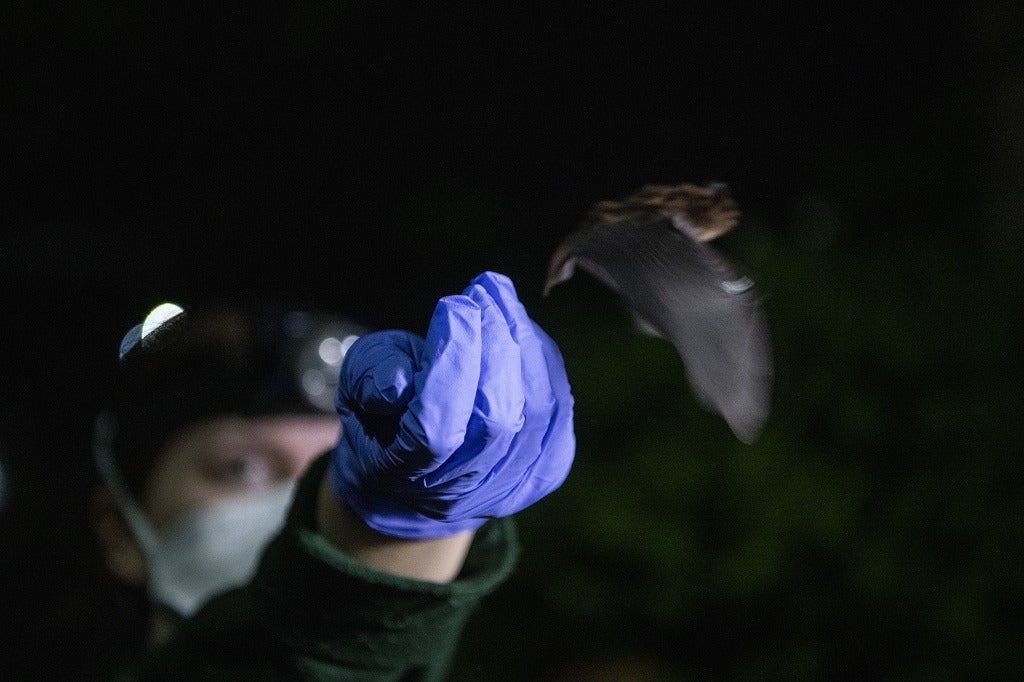 Do Your Part to Protect Bats

A reminder to NEVER handle a live bat with your bare hands. White-nose syndrome does not pose a threat to humans, pets or other animals but the bat could be infected with rabies.

Previous Article
Next Article
labels:
You Might Also Like
Holy Pest-Control, Batman!
It’s true – bats have a bad rap. They’re best buddies with Dracula and have a cameo in “Macbeth.” They inspire spooky Halloween decorations. And if we’re not careful, we ourselves could become “batty.” They can carry viruses, including (most notably) the coronavirus that spread to humans from wildlife markets as Covid-19. But then there’s Batman. And those of us who know bats – like here at Northwest Trek and Point Defiance Zoo & Aquarium – know that they truly are the superheroes of the night: zipping effortlessly in the dark using echolocation or cutting-edge wing design, munching their own …
Learn More
Operation Bat Rescue
It couldn’t fly, but it had all the tiny, angular cuteness you could possibly want. In a small meshed container in the Northwest Trek veterinary clinic, a little brown bat hung in folds of soft pink cloth, sleepily chomping a mealworm and getting ready to be an ambassador – a new lease on life, thanks to Northwest Trek staff. “One of our keepers found him on the floor of the exit breezeway,” explained keeper Wendi Mello, gently lifting the sleepy bat out of its temporary house. “It was injured and couldn’t fly, but we knew we could help.” Keepers brought …
Learn More
Bat Science at Twilight
As pink sky slowly darkens behind tall trees, six scientists stand motionless outside the veterinary clinic at Northwest Trek. Only a robin’s chirp pierces the cool air. All eyes are fixed on the clinic’s overhang roof, straining to see through the shadows. They’re waiting for the appearance of a tiny creature that’s often misunderstood, yet is vital to human health, and is now in danger from a deadly disease. They’re waiting for bats. 6:00 p.m. Scientists Michelle Tirhi and Abby Tobin arrive at Northwest Trek, and start scouting bat roosts with Trek staff: conservation engagement coordinator Rachael Mueller, veterinary technician …
Learn More
Black gold: Hunting bat guano
Some was sprinkled around the base of a tree. More was scattered over the floor of the tram garage. But it was just outside one of the veterinary clinics, under a wide overhanging awning, that Michelle Tirhi got really excited. “Look at all that!” she exclaimed, sweeping her eyes around the concrete floor. “And it’s all fresh! We could just scoop up some right now.” Bending down, she picked up a tiny black sliver the size and shape of a rice grain and held it up triumphantly. Bat poop. Or guano, to be precise. Tirhi, the District II wildlife biologist …
Learn More
See All Articles