They’re best buddies with Dracula and have a cameo in “Macbeth.” They inspire spooky Halloween decorations. And if we’re not careful, we ourselves could become “batty.” They can carry viruses, including (most notably) the coronavirus that spread to humans from wildlife markets as Covid-19.

But then there’s Batman. And those of us who know bats – like here at Northwest Trek and Point Defiance Zoo & Aquarium – know that they truly are the superheroes of the night: zipping effortlessly in the dark using echolocation or cutting-edge wing design, munching their own weight in mosquitoes every night or spreading fruit seeds, and pollinating the world’s plants as they go.

Right off the bat, without batting an eyelid, we’re going to bat for these adorable furry creatures – and this Halloween, we want you to meet ours.

They don’t have names – there are just too many of them! Northwest Trek is home to one of the largest wild bat colonies in the South Puget Sound region: They roost under the eaves of our tram garage, our veterinary clinic, our administration building and around the park, including in all the bat boxes we’ve put on trees.

Yuma myotis, little brown myotis, California myotis, silver-haired and hoary bats, they chitter and squeak as they wake up each sunset to fly out into the forest. We love them, not just because they’re tiny, fuzzy and cute (although they are!) but because they keep us all healthy: Pacific Northwest bats are insectivores, consuming their own body-weight in bugs every night. If we didn’t have bats, we would get eaten alive by mosquitoes – and farmers would have a much harder time growing our food.

Other American bats also pollinate plants as they fly around. If you drink tequila or admire saguaro, you can thank a bat: They are the key pollinators of agave and cactus plants.

Their other superpower is echolocation, the ability to navigate purely via sound. As bats fly, they emit high-pitched sounds (beyond human detection) which bounce off surrounding objects and return to their ears. Bat echolocation is so sensitive that a bat flying 25 miles per hour in complete darkness could distinguish a junebug from the leaf it sits on. Even Batman couldn’t beat that.

Our bats also help science. We count and study them to look for white-nose syndrome, a fatal disease that is devastating bat colonies around the country. So far, ours are healthy – there’s no health risk to humans – and they are helping scientists understand how to protect their species.

“Bats are astounding animals who pollinate our food and control insects which would otherwise invade us,” says Rachael Mueller, who leads annual bat counts at Northwest Trek. “And everyone can help protect them. Improve bat habitat around your home by reducing outside lighting and protecting trees, streams and wetlands. And protect them from disease by staying away from their roosting sites. We need bats, and like all wildlife we can live in harmony with them if we give them space.”

Point Defiance Zoo guests don’t often get to meet Indy – he’s nocturnal, like all bats, and he spends most of the day asleep upside down in his home behind the Wild Wonders Outdoor Theater. But like all bats, he’s a special guy.

Indian fruit bats are some of the largest bats in the world, with a wingspan of four to five feet. Known as “flying foxes” in India, Australia and other countries, fruit bats definitely aren’t foxes – though they are mammals, the only kind that can fly under their own power. That’s because bat wings are uniquely constructed, with stretchy skin, special muscles and the ability to fold during flight (like a human hand can fold). Some can even turn 180 degrees in just three wing beats, and scientists study those aeromechanics to improve airplane maneuverability.

As their name suggests, fruit bats love eating fruit. Indy enjoys lapping up the juice from his favorite fruits, spitting the rest out. It’s not good human manners, but in the wild this eating habit helps spread seeds around the rainforest to grow new trees.

Bats are also important pollinators as they fly from tree to tree, helping ecosystems diversify and thrive.
In some Indian towns, fruit bats are revered as sacred, with colonies living in the same trees for generations alongside villagers. The “flying foxes” of Sydney, Australia are now a tourist attraction in their own right, with visitors staking out key spots to watch the clouds of fruit bats take off at sunset to find food. And beloved children’s book “Stella Luna” stars an Indian fruit bat!

But if they are not protected, big bats like these can also be seen as a source of food – leading to wet markets and the transfer of bat viruses (which are many) to humans.

“We need to protect bats, not fear or kill them,” says Natalie Davis, curator at the Wild Wonders Outdoor Theater. “Like Indy, they’re amazing creatures who are essential to our world’s ecosystems.”

The bottom line? Bats ARE superheroes of the night – and we can save them. There’s not a moment to lose. 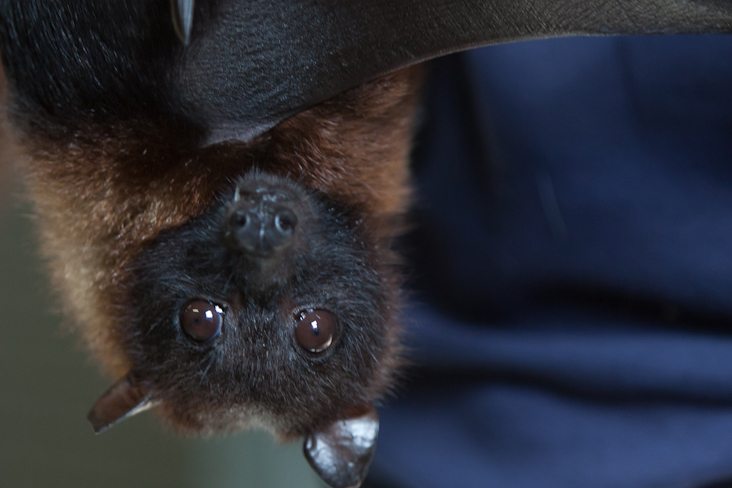 Previous Article
Next Article
labels:
You Might Also Like
Bat Science
Northwest Trek Wildlife Park and Washington Department of Fish and Wildlife (WDFW) are partnering with scientists from Wildlife Conservation Society Canada (WCSC) to test the effectiveness of a promising new bat-saving treatment to help wild bats survive the effects of white-nose syndrome. White-nose syndrome has killed millions of hibernating bats in eastern North America and was first discovered in Washington in 2016. State wildlife officials have confirmed white-nose syndrome in King, Chelan, Kittitas, and Pierce counties. The fungus that causes white-nose syndrome has also been confirmed in Lewis, Mason, Snohomish, and Yakima counties. “If this innovative probiotic spray is effective, …
Learn More
Operation Bat Rescue
It couldn’t fly, but it had all the tiny, angular cuteness you could possibly want. In a small meshed container in the Northwest Trek veterinary clinic, a little brown bat hung in folds of soft pink cloth, sleepily chomping a mealworm and getting ready to be an ambassador – a new lease on life, thanks to Northwest Trek staff. “One of our keepers found him on the floor of the exit breezeway,” explained keeper Wendi Mello, gently lifting the sleepy bat out of its temporary house. “It was injured and couldn’t fly, but we knew we could help.” Keepers brought …
Learn More
Bat Science at Twilight
As pink sky slowly darkens behind tall trees, six scientists stand motionless outside the veterinary clinic at Northwest Trek. Only a robin’s chirp pierces the cool air. All eyes are fixed on the clinic’s overhang roof, straining to see through the shadows. They’re waiting for the appearance of a tiny creature that’s often misunderstood, yet is vital to human health, and is now in danger from a deadly disease. They’re waiting for bats. 6:00 p.m. Scientists Michelle Tirhi and Abby Tobin arrive at Northwest Trek, and start scouting bat roosts with Trek staff: conservation engagement coordinator Rachael Mueller, veterinary technician …
Learn More
Black gold: Hunting bat guano
Some was sprinkled around the base of a tree. More was scattered over the floor of the tram garage. But it was just outside one of the veterinary clinics, under a wide overhanging awning, that Michelle Tirhi got really excited. “Look at all that!” she exclaimed, sweeping her eyes around the concrete floor. “And it’s all fresh! We could just scoop up some right now.” Bending down, she picked up a tiny black sliver the size and shape of a rice grain and held it up triumphantly. Bat poop. Or guano, to be precise. Tirhi, the District II wildlife biologist …
Learn More
See All Articles