Blog Home
Wolverines are back! 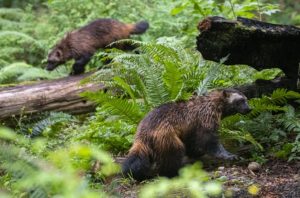 They’re smart, strong and full of personality – and they’re back at Northwest Trek Wildlife Park.

Brother-and-sister wolverines Rainier and Ahma, both born at Northwest Trek, have returned home, and they will make their official public debut July 13-14 in a newly renovated, 10,800-square-foot habitat.

They’ll be visible at different times as they get used to their new home – come back later if you don’t see them at first.

They have plenty of trees, boulders and logs to climb and explore, giving Northwest Trek guests a chance to see the “superhero” strength, agility and personality of this rare Northwest mammal.

The largest land species in the mustelid (weasel) family, wolverines are known in both biology and popular culture for their sheer ferocity. With large feet for traction in snow, powerful muscles for fighting and digging, a solid body, long sharp claws, fierce snarl and indomitable nature, they can take on both large predators (including bears) and harsh alpine conditions.

And as their scientific name –Gulo gulo, or gluttonous glutton – suggests, they’ll eat almost anything, living or dead.

Those abilities have earned them a fearsome reputation. They are rarely seen in the wild, and will run from humans.

Wildlife biologists still have a lot to learn about wolverines due to their wide range over terrain that’s very hard to access, Heinzman said.

Rainier and Ahma were born in 2009 and 2007 at Northwest Trek in different litters from the same parents. Rainier was named for our local mountain; Ahma is Finnish for ‘wolverine’. Each spent some time living at other zoos before recently returning home to meet each other for the first time.

They get along extremely well, said keeper Wendi Mello. Ahma, though smaller and more cautious, is dominant, which is typical for females in the weasel family. “They are so intelligent and curious, even goofy,” Mello said. “They love exploring their environment, and enjoy any enrichment item we give them. They play and wrestle with each other, and are very interested in people.”

Wolverines are also naturally athletic, and the pair loves to climb, run and explore a habitat that’s been renovated and expanded just for them. Trees, fallen logs, boulders and hollow snags abound, with several complex climbing structures and even a stream to splash in. As wolverines naturally cover a wide territory, the new habitat is now 13 times the size of the former wolverine exhibit.

North American wolverines are rare in the wild, with fewer than 300 in the lower 48 U.S. states and around three dozen in Washington state. Due to their dwindling numbers, they are candidates for protection both federally and by Washington state. The animals live in remote mountain wilderness in northern and western states. As females need a snow den to raise young, climate change is further reducing their range and numbers.

“Wolverines are scrappy, adaptable and smart,” says Mello. “They’re survivors in a harsh environment. I’m so excited for our guests to meet them here.”

Previous Article
Next Article
labels:
You Might Also Like
AHMA’S EYES
Wolverines are tough survivors. They are exposed to harsh, frozen Northwest mountain winters. They are agile climbers, strong diggers, and aren’t afraid of anything. At Northwest Trek Wildlife Park, Ahma the wolverine has proved to be all those things and more in her 15 years of life. She is the second oldest wolverine in human care in the United States. And over the past few weeks, she has faced her biggest challenge yet: having surgery to remove both of her eyes after her animal care team noticed a significant change in her eye color and was diagnosed with a lens …
Learn More
See All Articles