Building a Home for Rescued Eagles

As Jake Pool scoops up a log for the new Eagle Passage habitat at Northwest Trek, he does it with more care than you’d usually use with a bulldozer. This is precious cargo – in many ways. First, it’s a centuries-old trunk, hand-picked in the Free-Roaming Area from where it was cast aside by loggers long ago. It has survived a fire, and now nurses dozens of tiny seedlings and ferns.

But most importantly, it’s going to become, along with other logs, a ramp for rescued bald eagles – part of an exhibit designed to make a sustainable home for birds with disabilities. The Eagle Passage Grand Opening is Aug. 3. 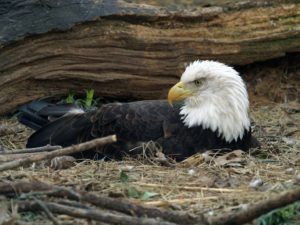 Pool is the horticulturalist at Northwest Trek Wildlife Park, and he’s spent years collaborating with animal keepers to work with plants and trees in the best way possible for the park’s animals.

Eagle Passage, though, is something special. Opening August 2019, it offers a home to bald eagles who have been rescued from the wild with injuries that, to varying degrees, prevent them from flying. One eagle has limited wing extension from a broken bone that never healed properly. Another cannot fly at all, due to a shoulder injury and congenital breast anomaly. A third is missing a wing entirely – it had to be amputated after a gunshot wound.

But all the eagles will find a home that lets them live in comfort, thanks to Pool and his crew.

“These big logs will go over and around structures to give the less-flighted birds access,” explains Pool, gesturing to the massive old logs he’s just hauled up from the Free-Roaming Area.

While the big tunnel in the walk-through exhibit is perfect for humans wanting to immerse themselves in an eagle’s world, it’s more difficult for a bird with limited mobility to fly over. So Pool will arrange the logs to lead up to the tunnel’s massive support beams, as well as over the half-hidden mew (a building that gives the eagles a safe, inside place). Pool’s already planning how to train branches of the living maple and alder trees growing in the exhibit to flesh out that aerial pathway.

Then there are the perch stumps. Snags of six real trees, they were moved to the exhibit to create places for the eagles to perch. Pool has drilled holes at various points, in collaboration with keepers, to insert thinner perch branches with varying widths and textures, which help the eagles’ stability and foot health.

“Whatever flying or jumping ability they have, they’ll be able to find a perch,” Pool explains. “And if we need to rearrange the perches later, it’s easy to drill more holes.”
As well as keeping as many living trees as possible in the constructed habitat, Pool is also planting extra foliage to give the eagles more screening, something that will give them places to feel secure.

One of the things Trek guests will notice first, however, are the trees of Eagle Passage. The entire exhibit is built onto real, old-growth Douglas firs, with the surrounding nets and cables attached to these forest giants via a unique block-and-collar system that lets the trees grow. With no bolts in their collars, the trees stay healthy.

It’s exactly the same system used for the park’s Zip Wild ziplines, and was in fact installed by the Zip Wild crew, who scaled 40 feet up the trees in harness to install the collars and cables.

Even the two galvanized steel posts – installed to give extra stability at key points – have been given a coat of “bark” and mushrooms to look just like the real trees.

“These trees are all over 80 years old,” says Pool. “We’ve taken samples to date them. This one, near the entrance, is around 250 years old. They’re amazing.”

To complete the wild experience for both birds and humans, Pool has hauled up five enormous Western red cedar and Douglas fir stumps, again from the Free-Roaming Area. Covered in moss, and growing tiny gardens of nurse plants from their tops, they are charred from the 1918 fire, and some even bear the notch of loggers’ springboards from early last century.

In between, Pool’s planting sword ferns salvaged from local building sites – decades-old plants given a new lease on life.

“We’ve been working on this since 2016, saving plants and picking out logs,” says Pool, passionately. “My goal is to make this look and feel as much like where you’d find bald eagles in the wild – like a rainforest up at Mount Rainier or the Olympics.”