Hard to believe, but it’s been a year exactly since our two grizzly cubs arrived as rescued orphans. Now well over a year old, Huckleberry and Hawthorne are much bigger, much stronger but just as lovable. The bear equivalent to teenagers, they are looking a lot more like adults, but still love to play like cubs.

Our keepers are celebrating with a special enrichment at 1pm Saturday Aug. 3: yummy watermelon cake for both bears.

We decided to honor the moment with a side-by-side comparison of our cubs, then and now.

Then: Loved to carry branches, push over weeble toys.

Now: Can throw big rocks and logs. “Anything they decide to throw into the pool, I can’t pull it out,” says keeper Haley Withers. They’re also now able to dig a 4×4-foot hole in one day, Withers says.

Then: Three meals a day, with meat chopped into chunks and new veggies gradually introduced.

Now: Together the cubs eat over 40 lb of food every day. They eat more meat and fish than a year ago, exploring new items like fish heads, big bones and spring greens.

Then: Lots of naps in the den.

Now: They sleep longer at night, but still like a daytime nap out in the sun.

Then: Learning behaviors to help with their care.

Now: Can do many behaviors: showing each paw, standing tall, sitting, lying, and opening their mouths wide to show all those teeth. Next up: Learning how to be still for a vaccine injection.

Then: Exploring their new home, trying out the pool, attempting to climb trees, rolling on weeble toys.

Now: Rearranging the logs in their new home, wrestling in the pool, exploring puzzle feeders (enrichment items given to animals to give them mental and physical stimulation), but not so much tree-climbing these days. “Their favorite thing is pool time,” says Withers, “and they can spend hours with puzzle feeders. And they love tearing up the logs in the yard into mulch.”

Oh, and they still love the weebles – though they don’t quite fit inside them anymore. 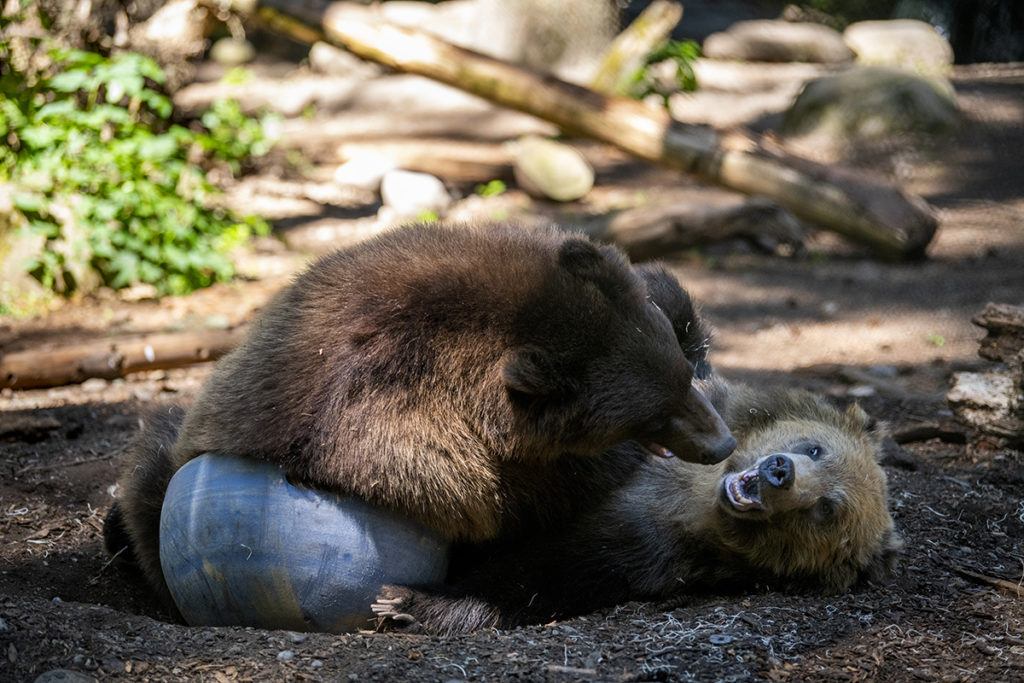 Previous Article
Next Article
labels:
You Might Also Like
NORTHWEST TREK CELEBRATES 45TH BIRTHDAY
Northwest Trek Wildlife Park opened on July 17, 1975. Today, the park embodies the vision of Dr. David T. “Doc” and Connie Hellyer, who donated their land to Metro Parks Tacoma in the early 1970s to preserve it as a wildlife park. If the Hellyers were alive today to walk through the park, they would see 185 animals, including eagles, bison, grizzlies and wolves enjoying the land they left behind just for them. They would also see many of the same towering trees. The Hellyers knew their lake-and-forest-studded land in the shadow of Mount Rainier was something special, and they …
Learn More
A Wedding Surrounded by Beauty
Maybe it was the bison. Maybe it was the towering evergreens and tranquil lake. Or maybe it just felt like home. But when Mike and Amelia Sharpe first visited Northwest Trek to see if they wanted to get married there, the decision was instant. “We looked at each other and we knew,” says the couple, who not only held their wedding at Northwest Trek in July, 2017 but went back for an anniversary visit in 2018. “We didn’t look anywhere else.” Northwest Beauty A big part of it was that the wildlife park felt like home. Native Washingtonians, Mike and …
Learn More
See All Articles