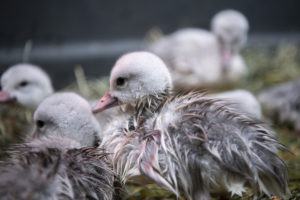 Forget the ugly duckling. These cygnets are only a week old, and already beautiful.

But the six baby swans, which hatched early June at Northwest Trek, aren’t just pint-sized bundles of fluffy gray cuteness. They’re part of a success story for trumpeter swans in North America, helping the species flourish in the wild.

“This year we had six cygnets, which is more than we’ve had in years,” said curator Marc Heinzman. “It’s great to see such a healthy population here.”

Paired for life, breeding for the future 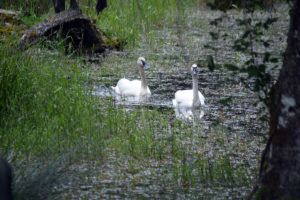 The new cygnets were hatched to the wildlife park’s breeding pair of swans, permanent residents of the Free-Roaming Area who were rescued with wing injuries that left them unable to fly. Swans mate for life, and the current pair is no exception. They’ve contributed about 16 cygnets to their species over the last few years.

To protect them from predators like bald eagles, and to help the wild population, the park’s cygnets are gently gathered up by keepers, checked out by head veterinarian Dr. Allison Case, and then given to the Northwest Swan Conservation Association.

They’ll be reared by foster-parent swans as wild birds, eventually either joining the species’ annual migration or pairing with other birds as part of the Association of Zoos and Aquariums’ Species Survival Plan. On the Pacific Coast flyway, the birds winter in Washington and Oregon, flying north in spring to breed in Alaska, Yukon or British Columbia.

Trumpeter swans, one of America’s largest native waterfowl, are not threatened in Washington state, where it’s illegal to hunt them. But their numbers have dwindled drastically in middle America, says Martha Jordan, the Northwest Swan Conservation Association’s executive director.

And their numbers are declining all along the Pacific coast, due to lead poisoning from ingesting lead shot, collisions with power lines, loss of habitat to farmland and drying of wetlands due to climate change.

Northwest Trek’s role in trumpeter swan conservation goes back decades, says Free-Roaming Area keeper Deanna Edwards. Not only has the park added over four dozen cygnets to the wild population over the years, but staff members have increased public awareness and education about the birds. Swans born at Northwest Trek have been spotted as far away as Mexico, and one in particular has over 300 documented descendants.

“They’re so beautiful, and so important,” says Edwards.

SEE SWANS: While the cygnets have left, you can spot our pair of trumpeter swans in the Free-Roaming Area, either from a Discovery Tram Tour or close-up in a Keeper Adventure Tour.

Previous Article
Next Article
labels:
You Might Also Like
MOOSE ON THE LOOSE IN NORTHWEST TREK’S FREE-ROAMING AREA
A moose is on the loose. Quick, look for his ears popping out from behind the ferns. A five-month-old moose calf named Birch ambled into Northwest Trek Wildlife Park’s 435-acre Free-Roaming Area Wednesday and will make his public debut this weekend. Birch arrived in early November from Alaska Zoo and has been adjusting to his new Eatonville home off-exhibit. He recently met his new buddy Aspen, a 5-year-old female moose. “We’re delighted to welcome another generation of moose and provide a new companion for Aspen,” said zoological curator Marc Heinzman. Aspen will teach Birch how to be a moose here …
Learn More
BABY BOOM AT NORTHWEST TREK
Northwest Trek’s springtime baby animal boom is on! A mountain goat kid, three elk calves and three bighorn sheep lambs were all born in May at the wildlife park and can be spotted in the 435-acre Free-Roaming Area. More animal births are still expected as well. Over the Memorial Day weekend, the mountain goat kid was born to 3-year-old mom, Bailey. Zoological Curator Marc Heinzman said keepers are closely monitoring the new family. “Keepers have seen the kid nursing and spending time moving around with its mother Bailey,” said Heinzman. “The pair is spending a lot of their time up …
Learn More
See All Articles