You could say we’re a bit batty for bats at Northwest Trek. We appreciate what bats offer our ecosystems — and because of that, we work hard to protect them. Northwest Trek is home to one of the largest wild bat colonies in the South Puget Sound region. The bats roost under the eaves of many of our buildings and around the wildlife park, including in all the bat boxes we’ve put on trees.

Bats keep us all healthy. Pacific Northwest bats are insectivores, consuming their own body weight in bugs every night. If we didn’t have bats, we would get eaten alive by mosquitoes – and farmers would have a much harder time growing our food. Other American bats also pollinate plants as they fly around. If you drink tequila or admire saguaro, you can thank a bat. They are the key pollinators of agave and cactus plants.

Northwest Trek employees and volunteers are helping to protect bats through science and research. In partnership with staff from Washington Department of Fish and Wildlife, we count and study them to look for white-nose syndrome, a deadly disease that is devastating bat colonies around the country. 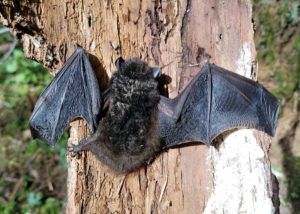 White-nose syndrome is a fungus that grows on the noses, wings and ears of bats during winter hibernation. Named after its white, fuzzy appearance, it invades deep skin tissues, irritating the bats as they hibernate. Bats with this disease awaken more frequently during hibernation, which leads to them burning through the fat reserv

es they need to survive. In eastern North

America, the disease has killed over six million bats, wiping out some colonies.

White-nose syndrome was first found in King County in 2016. Each year, staff and volunteers at Northwest Trek collect about 25-30 samples from the park’s colony to test for the disease. So far, our bats are healthy – there’s no health risk to humans – and they are helping scientists understand how to protect their species.

“Everyone can help protect bats,” says Rachael Mueller, who leads annual wild bat counts at Northwest Trek. “Improve bat habitat around your home by reducing outside lighting and protecting trees, streams and wetlands. And protect them from disease by staying away from their roosting sites. We need bats, and like all wildlife we can live in harmony with them if we give them space.”

A reminder to NEVER handle a live bat with your bare hands. White-nose syndrome does not pose a threat to humans, pets or other animals  but the bat could be infected with rabies.

To read more about what we’re doing to protect bats and what you can do to help, click here.

Previous Article
Next Article
labels:
You Might Also Like
Bat Science
Northwest Trek Wildlife Park and Washington Department of Fish and Wildlife (WDFW) are partnering with scientists from Wildlife Conservation Society Canada (WCSC) to test the effectiveness of a promising new bat-saving treatment to help wild bats survive the effects of white-nose syndrome. White-nose syndrome has killed millions of hibernating bats in eastern North America and was first discovered in Washington in 2016. State wildlife officials have confirmed white-nose syndrome in King, Chelan, Kittitas, and Pierce counties. The fungus that causes white-nose syndrome has also been confirmed in Lewis, Mason, Snohomish, and Yakima counties. “If this innovative probiotic spray is effective, …
Learn More
Holy Pest-Control, Batman!
It’s true – bats have a bad rap. They’re best buddies with Dracula and have a cameo in “Macbeth.” They inspire spooky Halloween decorations. And if we’re not careful, we ourselves could become “batty.” They can carry viruses, including (most notably) the coronavirus that spread to humans from wildlife markets as Covid-19. But then there’s Batman. And those of us who know bats – like here at Northwest Trek and Point Defiance Zoo & Aquarium – know that they truly are the superheroes of the night: zipping effortlessly in the dark using echolocation or cutting-edge wing design, munching their own …
Learn More
Waiting for Bats
You could see 500 bats – or you could see three. Either way, every one of the 49 Northwest Trek staff, interns and volunteers that gathered for the twilight Bat Counts on June 28 and July 5 was vital. Armed with data sheets, click counters and plenty of comfy chairs, the bat counters were helping the wildlife park study its native population of bats – a study that in turn is crucial to helping scientists better understand and protect these tiny mammals. Plus, it’s becoming a Trek tradition. Bat Spotting “Is that –?!” “No, it’s a bird.” I slumped back …
Learn More
Bat Science at Twilight
As pink sky slowly darkens behind tall trees, six scientists stand motionless outside the veterinary clinic at Northwest Trek. Only a robin’s chirp pierces the cool air. All eyes are fixed on the clinic’s overhang roof, straining to see through the shadows. They’re waiting for the appearance of a tiny creature that’s often misunderstood, yet is vital to human health, and is now in danger from a deadly disease. They’re waiting for bats. 6:00 p.m. Scientists Michelle Tirhi and Abby Tobin arrive at Northwest Trek, and start scouting bat roosts with Trek staff: conservation engagement coordinator Rachael Mueller, veterinary technician …
Learn More
The Great Trek Bat Count
The mission began at sunset. After a quick briefing to receive assignments and equipment, 26 staff and volunteers spread silently out to their locations. In the entrance breezeway, near the tram garage and underneath trees, they hunkered low on the ground as darkness grew. They waited, breath hushed. And then, with a chattering and creaking overhead, the mission began: The Great Trek Bat Count of 2018. As bats began to fly out from their roosts into the night to hunt, the humans sitting quietly below them began to click their counters, one for each outgoing bat. One staff member had …
Learn More
See All Articles