Beyond the Bell and Into the Woods

Blog Home
Beyond the Bell and Into the Woods

They were literally jumping up and down as soon as they got off the buses.

It was the first-ever field trip for Beyond the Bell, a groundbreaking new partner program offering after-school activities and childcare to Tacoma students. But Friday October 8 was a no-school data day – and so Beyond the Bell was bringing any K-5 child who signed up on a field trip to Northwest Trek Wildlife Park, all day long.

And every single one of the 155 students was incredibly excited. 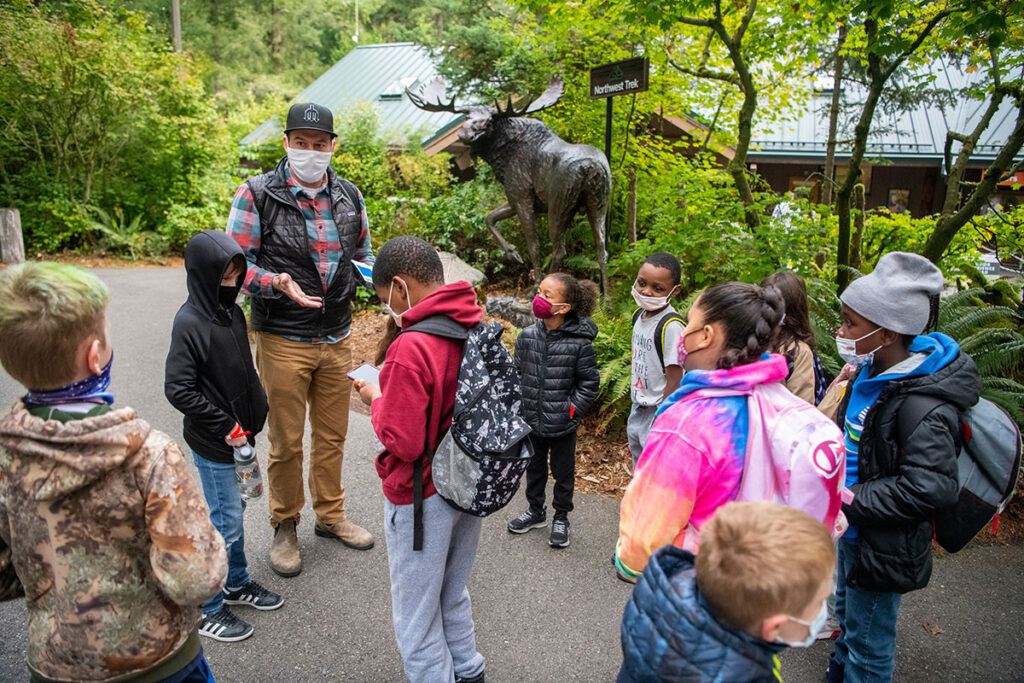 Beyond the Bell is a comprehensive program for Tacoma elementary and middle school students that offers a one-stop sign-up for families needing afterschool sports, activities or childcare for their kids. It’s run by three community partners: nonprofit Greentrike provides programs and learning, while Metro Parks Tacoma staff coordinates facility use and Tacoma Public Schools provides facilities, promotion and the Family App for registration. Launched in September, the program runs throughout the school year in five sessions, offering pay-what-you-choose fees throughout 2021.

For the kids lining up under the towering trees at the Northwest Trek entrance, however, it was seeing grizzly bears and bald eagles that was the really exciting part.

“All right, my group,” called out Jason Jones, Metro Parks childcare specialist, in a brisk voice. “Let me see your lines. Two lines. Thank you. All right, where do we want to go first?”

As the group skipped down the path, voices piped up all around.

“I’ve been here once before,” announced Jack. “The grizzlies are actually pretty cute. When there’s not food around, that is.”

Aside from Jack, though, none of the children in Jones’ group had ever been to Northwest Trek. Originating at Center at Norpoint, their bus included students from Browns’ Point Elementary. Other buses had come from STAR Center (Wainwright, Whittier, Edison, Arlington and Manitou elementaries) and People’s Center (McCarver, DeLong Elementary and others).

When the group arrived at the lower grizzly viewing deck, however, there was a more unusual species walking around the habitat: a keeper.

“Look, she’s putting food out,” Jones pointed out. “If we keep watching we’ll see bears. What do you think they eat?”

“Oooh!” exclaimed everyone, as grizzly bear Huckleberry lumbered out and began munching veggies.

The group wandered on down the path, swapping bear views with the next set of students.

“Look, I got so many photos!” cried Derron. “I got up really close to a grizzly bear. And here’s me on the bus! And here’s my brother!”

Gray wolves were next, and eyes became big as saucers staring at the huge white animals lounging on logs, chewing bones.

“How do you talk to a wolf?” asked Jones. Immediately the air was filled with joyous howling – the human kind. Then the group moved on into the Baker Cabin to stroke a realistic taxidermied wolf – “Wow, this is so soft!” “Is it real?” – and spy through the kid-sized tunnel.

Kids stared back as a fluffy red fox stared from a rock and gasped in awe as a thick-furred wolverine darted along a log, mouth full of meat.

Face shining with delight, Gavin held up a white camera that he’d just learned to zoom. “Look!” he cried. “Look!”

Past the black bears, past sleeping beavers and dozing skunk, and right before lunchtime a bonus keeper talk as otters Blakely and Oakley dove for fish in bubble-filled water.

Little Kiara, with a chipmunk backpack, shyly put up a hand.

“There you go, just like the otters!” Miranda smiled, and went on to answer questions: Where animals come from, what they eat, where they live. As she spoke, noses pressed to the glass windows in mesmerized wonder. 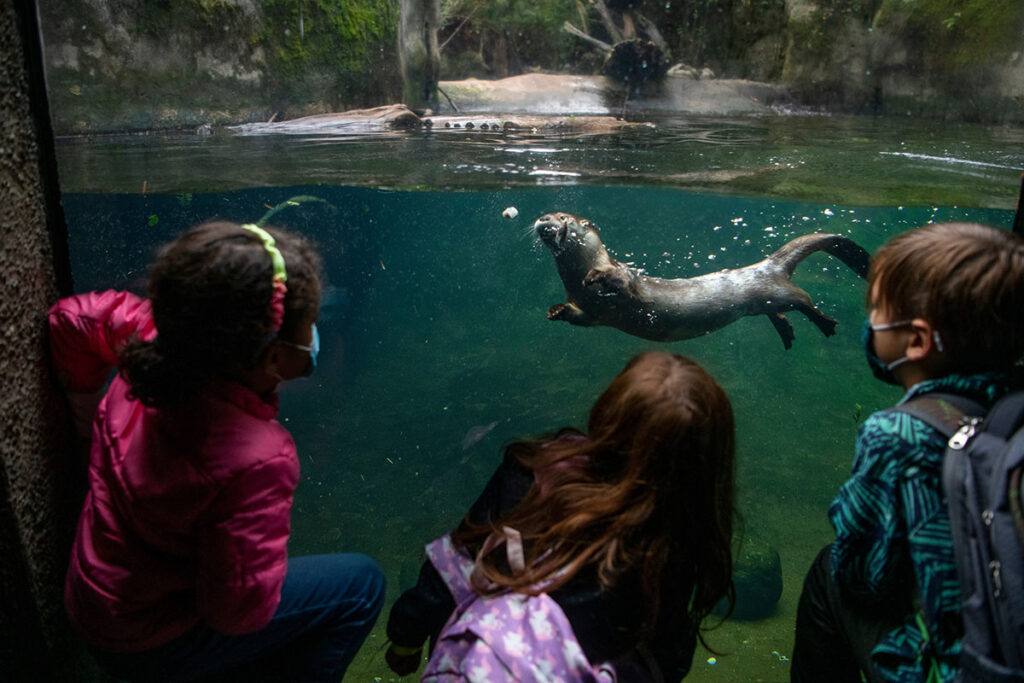 “I like that by coming on this trip they’re getting out of their comfort zone, unplugging, breathing fresh air,” explained Jones as he handed out water and sack lunches in the picnic pavilion. “Seeing nature hopefully inspires them to do more things like this, get outside more.”

“Getting to know the outdoors and the animals they live alongside is a necessity for kids,” said Alex Mock, Metro Parks’ community access and facility coordinator for Beyond the Bell, who was co-leading the group with Jones. “There are some kids who wouldn’t ever get to see all this. That education is amazing. And it’s also good for parents to have the childcare so they can still provide for their family.”

But it’s the kids who summed up the field trip best.

“My favorite was when I got to see the skunk!” said Mylo.

“I like the otters,” added Camila. “They like to eat fish, and they’re small, but they swim fast.”

“My favorite was the raccoon,” said Kiara softly, eyes sparkling. “It came up and looked at me.”

Registration for Session 2 of Beyond the Bell is open for Tacoma Public Schools families on the Family App through Oct. 27. The next field trip will be to Point Defiance Zoo & Aquarium on November 11, Veterans’ Day. All fees are pay-what-you-choose from $0-$150 through 2021.

Previous Article
Next Article
labels:
You Might Also Like
Wild Field Trip for Wildlife Champions
For 10-year-old Maya, it was a story come to life. The tall, quiet girl with long brown hair had always loved birds – especially owls – reading many books about them. Now, on a cold December morning, she was standing with her classmates of Arlington Elementary School in front of two real live snowy owls at Northwest Trek. One swiveled his head 180 degrees, and Maya gasped with delight. It was the Wildlife Champions field trip to Northwest Trek Wildlife Park, and for many of them – including Maya – it was their very first time seeing animals like …
Learn More
Making a Wild Escape
Six heads bent over a piece of paper on the Northwest Trek path. The atmosphere was intense. “All right, team – our first mission is Bears,” said Lauren Bentson, camp director at the Tacoma Nature Center. “That’s where our clues are, and our lockbox. Do we have a name?” “El Panthero!” called out one of the group. Others nodded. “Okay,” said Bentson. “Are you excited?” “Yeah!” came the reply. For the Wildlife Biologist campers from the Nature Center, it was time for a Wild Escape. Escape Rooms without walls “Wild Escape is a new program for kids or adults to …
Learn More
Virtually Wild
Experiencing a Northwest Trek Virtual Field Trip   You could almost touch the anticipation. Twenty first-graders from Tacoma’s Roosevelt Elementary waved excitedly to the face on the big screen in the front of their room – and as teacher Kaylin Gasparach toggled with the screen windows, the face waved back. It was Wendi Mello, keeper at Northwest Trek Wildlife Park, and as the class gasped, the owl on her arm slowly turned its head and blinked. Mello – and the owl – were taking the class on a raptor adventure full of science, learning and animals – a Northwest Trek …
Learn More
See All Articles