A Match Made for Swans

Blog Home
A Match Made for Swans

It was the calm after the storm– a beautiful, sunny day following a weekend of heavy rain– and Lily and Reed were going on their first date. They were set up by people who deeply cared for them, and everyone was hoping they’d hit it off.

That’s probably how their meet-cute story would start… if they were humans. But, in this case, Lily and Reed are trumpeter swans at Northwest Trek Wildlife Park. But, their story is just as sweet. After all, there’s a reason swans symbolize love.

Swans are one of the few species known for being monogamous for life. Unfortunately, Reed’s longtime companion passed away in June.

“At one point after she passed, we noticed Reed responding to his own echo, thinking it was another swan,” said Head Veterinarian Dr. Allison Case.

Zoological curator Marc Heinzman put Northwest Trek on a list with the Association of Zoos & Aquariums, asking for a female trumpeter swan. A wildlife rehabilitation center in Ohio answered the call.

Lily had an injury to her left wing and couldn’t fly and was deemed non-releasable.

Shortly after Lily arrived at Northwest Trek, Dr. Case and veterinary technician Tracy Cramer gave her a thorough wellness exam in preparation for her release into Northwest Trek’s 435-acre Free-Roaming Area. They checked her eyes, mouth and ears, took full body X-rays, collected blood for a comprehensive blood analysis and provided her with preventive medicine.

“Other than the injury to her wing, she’s a very healthy bird,” said Dr. Case.

After her exam, Dr. Case, Cramer and keepers drove Lily out into the Free-Roaming Area to meet her new beau. Reed was swimming in Horseshoe Lake, seemingly unaware that another swan was nearby. His vocalizations still only answered by the echoes across the water.

Lily heard him, and she rustled from inside her kennel. Keepers opened it up and she jumped right out into the lake and headed straight toward Reed, following him for a half hour through the water before they came back to shore together. 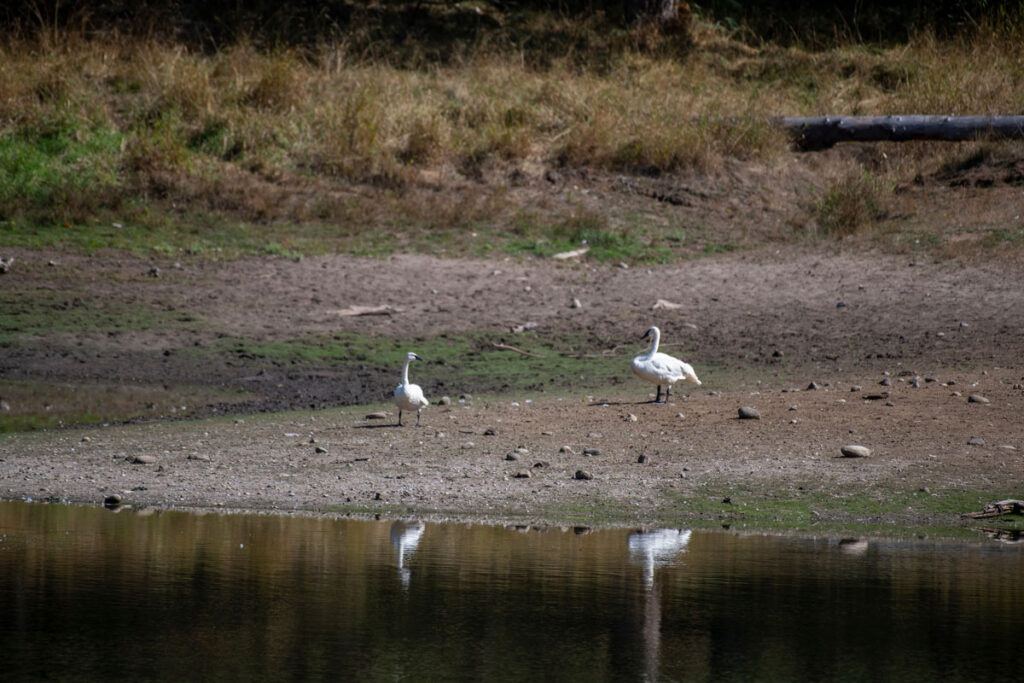 “He will teach her all about her new home,” said Dr. Case. “They’ll stick together like glue from now on.”