The caribou at Northwest Trek know Dave Meadows’ voice.
“Ca-a-ribou!” he calls. “Ca-a-ribou!”
As around a dozen or so graceful animals canter up to him, Meadows opens a gate and lets them through.
It’s spring – so it’s time for the caribou to go back out to roam, with Meadows as their caribou-whisperer. 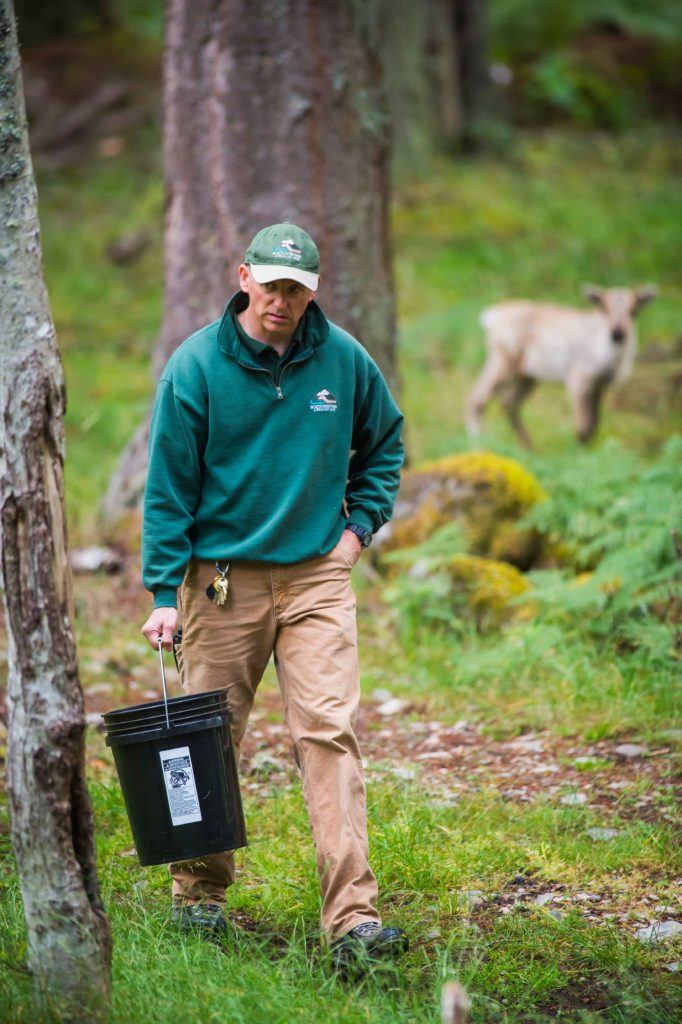 A keeper for Trek’s Free-Roaming Area, Meadows deals a lot with these gregarious members of the deer family. Rotating with other keepers, he goes out mornings and afternoons to feed them, check on them and lend a hand if any need veterinary care.
And every fall, when the elk go into breeding season (rut) and grow formidable antlers, he helps bring the caribou back behind the scenes for their own safety during winter.
“The caribou are more habituated to being around keepers due to the daily care we give them when they’re behind the scenes,” says Meadows. “This helps us when we need to give specialized care to a caribou while they are in the Free-Roaming Area.”
Woodland caribou are endangered in the U.S. Only a few are seen each year south of the Canadian border. At around 4-5 feet in height, they’re much smaller than elk and moose, but bigger than the black-tailed deer that also live at Northwest Trek.

“Rotating them between areas means that the native plants they like to eat are always available,” Meadows explains. “So they show excitement when we move them. They have a good sense of what is going to happen, and they’ll beat me to the gate.”
By March the elk males have lost both their antlers and their testosterone-fueled fighting instinct. And so Meadows rounds up the caribou herd to go back out to graze on the new spring foliage in the Free-Roaming Area, where visitors can spot them from Discovery tram tours.
“Come on, let’s go,” he calls to them, and they gallop past him through the gate, sniffing curiously.
“There you go,” he says.

Previous Article
Next Article
labels:
You Might Also Like
Red Velvet
Graceful arched antlers. Soft fuzzy velvet. And then – a touch of deep, blood-filled red. Welcome to the rut, that breeding season for animals like the bison, elk, caribou, bighorn sheep and deer that call our Free-Roaming Area home. If you know anything about rut, you’ll know that for Roosevelt elk and others in the deer family, it means sparring with huge antler clashes to vie for herd dominance. But there’s a less audible part of the rut that’s just as visually striking – and is essential to all that antler clashing. Losing velvet. Velvet (in animal terms) is the …
Learn More
A REINDEER’S CLOSE RELATIVE: THE CARIBOU
Reindeer tend to steal the spotlight in December, but this year it’s their close relative, the caribou, that are turning heads at Northwest Trek Wildlife Park. For the first time ever, the caribou are staying out in the park’s 435-acre Free-Roaming Area during the fall and winter months. In past years, the caribou were separated from the other animals in their own 15-acre forested enclosure during the fall and winter. “That’s the time of year when rut, also known as breeding season, can cause the larger and stronger elk to be more aggressive,” said Keeper Dave Meadows. “So we’d move …
Learn More
Caribou Back in Free-Roaming Area
“Caaaribou!” sings Northwest Trek Free-Roaming Area keeper Dave Meadows. The morning sun seeps through the trees and the birds are chirping. It’s an exciting day in the park. It’s the day the woodland caribou will leave their behind-the-scenes winter home and join the other animals in the 435 acre Free-Roaming Area. Each fall during elk breeding season or “rut”, the bull elk battle over dominant status and mating rights. To keep the caribou safe, the caribou are taken to their own large, forested space, away from the rutting elk. On this sunny March day, Meadows calls the caribou. They know …
Learn More
Animals make 2020 New Year’s reZOOlutions
A new year and a new decade have everyone – even the animals – making New Year’s reZOOlutions. Which animal’s 2020 resolution do you best identify with?
Learn More
See All Articles