“I love working here. It’s a unique place, and I love the challenges that come with it.” – Dave, assistant curator and Free-Roaming Area keeper, Northwest Trek

Dave swings into the keeper truck with the ease of someone who’s been doing it for 25 years. As he pulls slowly through the gate into the Free-Roaming Area, he’s already on duty. Alert eyes scan the road ahead and forest to either side. It’s something he’ll be doing constantly over the next two hours, whether he’s driving around the 435-acre habitat, pulling out feed buckets or taking radio calls from fellow keepers.

Dave is looking for animals – a constant and vital part of his job as Free-Roaming keeper.

“I start my day at 7:30am with emails, checking up on what’s going on,” says Dave, pulling around the first corner. “Some days we’ll have a zoological staff meeting. And in winter, when we move the caribou out of the Free-Roaming Area for their safety, I’ll go and take care of them first. Then I start rounds out here.”

Some animals don’t take much looking for. Almost immediately, the mountain goats – who were adopted in a translocation from the Olympic Mountains, and who love humans – have gathered around the front of the truck, expecting food. Dave is training them to stay away from the tram tour station, so he nudges the truck forward with infinitesimal slowness and the goats eventually trail behind it. Meadows chugs along, watching them in the rear-view mirror.

“We’re training them to come to the creep feeder,” he says laconically, referring to a pen with a low opening that allows smaller animals like the goats and sheep to come and eat without bigger animals – like bison – nudging them away.

At the feeder, Dave hauls out buckets for the enthusiastic goats, checks the perimeter fence and makes sure the water’s full. All the while, he’s scanning the horizon for more animals. 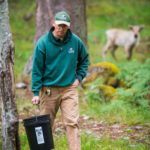 Leaving the goats behind, Dave moves on. His sharp eyes spot a bald eagle in the grass, and he whips out binoculars to find out what it’s hunting (probably a rodent). Some of the bighorn sheep are on the other side of the meadow.

Apart from the black-tail deer, every animal in the Free-Roaming Area has an ID tag and number, and Dave knows them all. For the 40-plus deer, he’s content if he sees a large representation of the group. With each animal he’s checking on health and wellness, conditions like pregnancy, behavior and feeding. He’ll note any concerns, and radio the head keeper and veterinarian with any big issues, staying with the animal until help arrives.

Dave hops out of the truck and hauls more buckets of feed, this time dropping little piles on the road for the sheep. Their fuzzy heads swivel round, but they keep their distance for now.

We keep going, up around the hillside. Unerringly, Dave spots a moose in the shadows, and a couple of deer. They amble over. Dave has been a keeper here for 27 years (and an intern and part-timer before that), and helped bottle-feed three moose. He doesn’t say much, but it’s clear the animals trust him completely.

“There’s definitely a connection when you’re face to face,” he says.

Does that make it harder to know their lives will be much shorter than his?

“An animal’s life goes by so quickly,” says Dave, in his quiet but practical voice. “You know that at some point they’ll pass away, and you prepare yourself for that. I’m a father myself, and I care. But I also don’t like to see animals suffer. And when you have a special animal that treats you well their whole life, you get close. It’s a hard question, and when you’re out here by yourself, you think about things like that.”

Being by yourself is a big part of the Free-Roaming keeper job. Dave drives smoothly around the curves, still looking constantly. Some bachelor elk appear between the trees, tall on the hillside, but he doesn’t stop to feed them as we still haven’t seen the bison.

“I don’t want the bison coming out and eating up all the feed first,” he explains.

Growing up in San Diego, Dave was a city kid who was always curious about animals, whether the ones in SeaWorld and the Zoo or the lizards, snakes and birds he’d try to spot while hiking. Having a zoo veterinarian for an uncle let him discover that world, and when the family moved to the Northwest he began working at Northwest Trek, first in summers during high school, then as an intern in college.

“Finding Northwest Trek, with the emphasis on native wildlife, that’s when it really struck,” he says.

We’ve covered the entire habitat, and still haven’t seen the bison. Dave will make two or even three trips before everyone is seen and fed. He’ll fill the other creep feeders and water troughs, especially in summer, then load up the keeper truck for the afternoon feed. Today he also has to help the team offload a large delivery of feed, and sometimes he’ll help at a veterinary procedure.

After lunch come meetings, training or project building, before the afternoon feed from 1-3pm. Then final data entry on each animal, and Dave’s day is over.
Being a Free-Roaming keeper definitely comes with challenges. Fall sees occasional branches down on fences, winters bring icy or snowy roads, spring is baby animal time and summer means extra water and food. And through it all, you need endless patience, waiting for animals to learn or feed or even just appear.

But that’s the reward for Dave, who also just took on the position of assistant curator.

“I love working here,” he says. “It’s a unique place, and I love the challenges that come with it.”

MEET KEEPERS: Meet all our keepers and learn what they do at Zookeeper Academy, July 17-18.