Focusing intently, Jessica stares into the swirling depths of a big black water tank. Summer sun reflects off the surface, air bubbles stir up the mid-layer and the bottom is in deep shadow. On first glance it’s nearly impossible to see that the tank contains over 100 plump, wriggling tadpoles. But Jessica – an animal keeper at Northwest Trek Wildlife Park – suddenly dives her bare arm into the water with a small net scoop.

“There you are!” she says, pleased, and gently deposits one tadpole into a shallow net pen floating at the surface.

Back from the brink

Northwest Trek doesn’t usually look after frogs on this scale. While there’s a Western toad and two rough-skinned newts in the Cheney Discovery Center, the rest of the wildlife park’s amphibians live a wilder life in the pond beyond the public area. They’re monitored by park naturalists and guarded from invasive bullfrogs, but otherwise on their own.

Yet in the past the park has helped raise endangered native frog species, and this summer it’s taking up that role again, helping raise nearly 500 endangered Northern leopard frogs from egg to froglet stage, until they can be re-released into the Washington wild to boost the native population.

Northern leopard frogs (the delightfully onomatopoeic-sounding Lithobates pipiens) are close to extinct in Washington and Oregon. Native to the Northwest, they’re a medium-large frog growing up to four inches long, with attractive dark spots on their greeny-brown bodies that lead to their name. And for a long time they were abundant throughout North America.

But due to habitat loss, disease, pollution, climate change and invasive predators like bullfrogs, Northern leopard frogs have seen a serious decline throughout the western U.S. and Canada. Now, there’s just one place in Washington where they’re found: the Potholes Reservoir in the Columbia Basin Wildlife Area.

Listed as endangered in 1999 and identified as a Species of Greatest Conservation Need under the Washington State Wildlife Action Plan, leopard frogs have been helped before by concerned humans. In 2019 a pilot program at the Oregon Zoo raised 400 tiny frog eggs collected by Washington Department of Fish and Wildlife (WDFW) scientists. When they reached froglet size, capable of independently hunting (and, hopefully, avoiding hungry bullfrogs), they were acclimated, then released back to their home wetlands for a headstart on life.

Now the process is happening again – and Northwest Trek is helping.

“Amphibian reintroduction projects can take several years to establish populations,” explains Emily Grabowsky, WDFW Northern leopard frog biologist. “We have yet to see adult frogs at the release site. So, we’re hoping to bolster those numbers in this second year of the project.”

“Giving these frogs a headstart by raising them free of predators gives their whole population a better chance of survival,” says Zoological Curator Marc Heinzman. “That’s where Northwest Trek comes in.”

“Hmm, see that little red patch on the side of the abdomen?” points out Dr. Allison Case.

The Northwest Trek veterinarian has paid a house-call to the leopard frog nursery behind the scenes at the park to check on a number of the tadpoles. Collected by WDFW as egg masses in May and hatched just recently, they’re growing well – but just a few are “listing” slightly to one side, a concerning sign.

“So I’m just going to place a drop of antibiotic there, to ward off any infection,” she continues.

Jessica expertly scoops up the little tadpole in a clear container, where it can rest temporarily out of water, and Dr. Case administers the medication, giving it a few minutes to soak into the absorbent amphibian skin.

“There you go!” she says reassuringly to the tiny creature. “You’re a tough guy. Or girl. Go home and have a snack.”

Jessica slips the tadpole back into the tank, where it darts off under a clump of artificial leaves put there by keepers to encourage natural hiding behaviors. (Real leaves would change the water pH too much.)

“Yes, really well,” answers Jessica, who clearly knows this and some of the other 487 tadpoles by sight (though their gender is impossible to tell at this stage). Hired by the park exclusively to care for the frogs, Jessica is in her element.

“This is exactly what I love doing,” she explains, as the veterinarian examines the other tadpoles occupying the net pens. “It’s a happy marriage of animal care and conservation – and I’m kind of obsessed with frogs.”

Which is just as well, since the care and keeping of endangered frogs is quite a business.

Every day, Jessica (or head frog keeper Dave) meticulously cleans each of the four black tanks, scooping up waste and debris by hand with a net. They clean the four reservoirs which feed filtered, warmed (if necessary) and oxygenated water into each tank, and test the water for pH, ammonia and oxygen levels.

The keepers also monitor shade levels in the frog nursery, and guard against predators who slip through the fencing – like an opportunistic garter snake who approached one day when Jessica had some of her charges in containers on the ground, ready to be counted. Jessica also measures several tadpoles from each tank weekly, lining them up inside their clear container on a yellow ruler and snapping a quick photo before they can squiggle out of alignment.

“Over 70 millimeters!” she exclaims today. “They’re growing so much!”

Then there’s feeding – right now the tadpoles are getting algae flakes (spirulina and hikari, mushed into a paste so they sink better) plus several romaine lettuce leaves per tank. They also love eating any algae that happens to grow on tank objects, like the heater pipe that in colder weather keeps their home at a constant 72 degrees (the temperature of their home pond in eastern Washington).

And they’ll even try other food sources that come into their tank – like Jessica’s fingers.

“They’ll come up and nibble me when I’m feeding them, just to see if I’m food,” she laughs. “It feels so funny!”

But a change is coming – the biggest one any frog will experience. All of the tadpoles have now budded tiny, weeny legs, just millimeters long – and as those grow, their tails will shrink and they’ll be able to hunt for themselves.

Right now, the re-release of the froglets is scheduled for late July, to be done by WDFW biologists like Grabowsky, who will prepare by controlling bullfrogs and tall vegetation like cattail and bulrush at the site.

But before then, keepers will drive some 100 tadpoles down to Oregon Zoo, to be raised there and make more room for the Trek tadpoles.

For both Northwest Trek and WDFW staff, the release will be a successful story end – and hopefully also a beginning.

“Eventually, we hope to establish a self-sustaining population of frogs at this site to ensure that this species continues to persist in Washington, and in more than just one location,” says Grabowsky.

But for Jessica, it will also be a farewell.

“I love caring for them and watching them grow,” she says. “And I do talk to them, though they don’t really care. It’s just so great to do something to help this endangered species recover in the wild.” 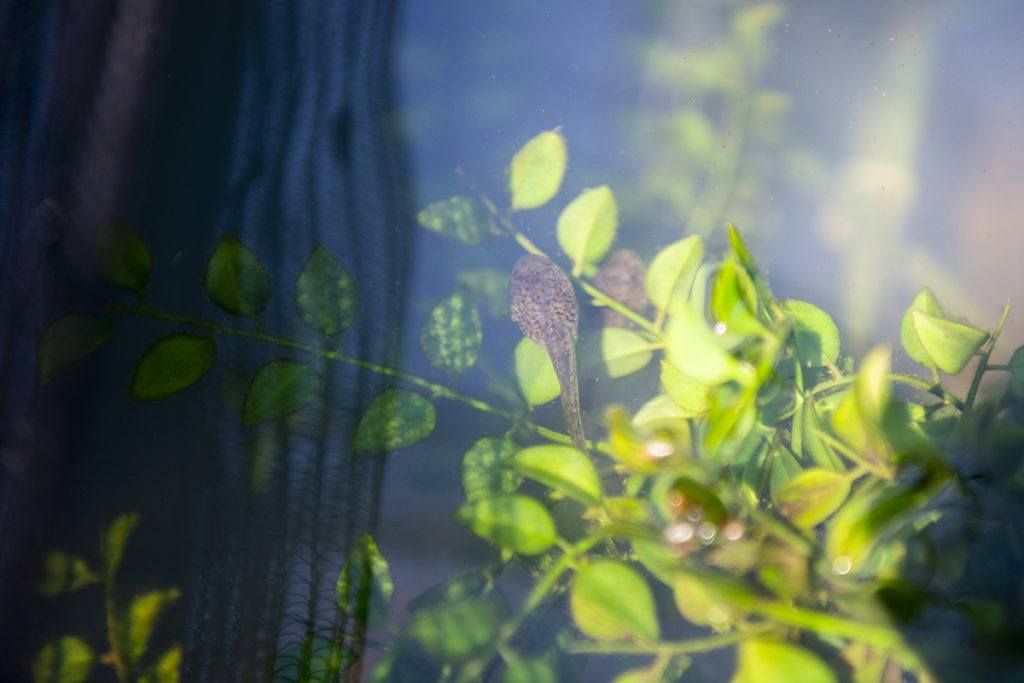