The Cheney Discovery Center reopens May 3 at Northwest Trek Wildlife Park and will be open daily from 11am-4pm. The recently remodeled building invites guests of all ages to discover a tiny world of reptiles and amphibians like a gopher snake, northern leopard frogs, rough-skinned newts and more.

“There are new species and animals to meet and new educational puzzles and games to play,” said Education Curator Craig Standridge. “We are delighted to welcome guests back into this world of wonder to learn more about the smaller creatures of the Pacific Northwest.” 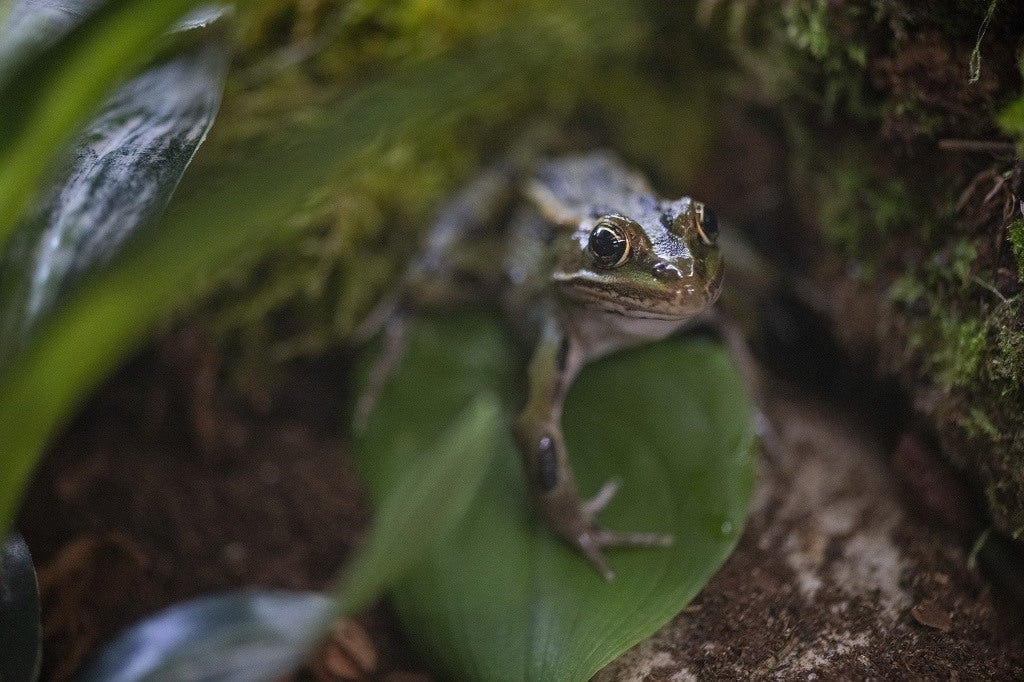 Once abundant throughout North America, northern leopard frogs are rapidly disappearing from their native ranges in Washington, Oregon, and western Canada. The species has been listed as endangered in Washington since 1999, and with only one known population remaining in the wild in the state, there is still a long path to recovery for the frogs.

“We’re very pleased to participate in this critical effort to save an endangered species here in Washington,” said Curator Marc Heinzman. “The new northern leopard frogs in the Cheney Discovery Center play an important role as ambassadors for their species, educating the public about their wild counterparts and what we can all do to help save them.”

Despite its name, Pacific tree frogs live on the ground and hide in underground burrows. Their skin can quickly change color to blend in with the environment, and they have glands that secrete a waxy substance to protect their skin from drying out.

Gopher snakes are beige to light brown, with brown to black blotches covering its body and a dark band across its head. They are good tree climbers that actively search for prey in burrows, dens, and rocks. When alarmed, they coil into an S-shape, hiss loudly and vibrate their tail rapidly on the ground to mimic a rattlesnake. Like all snakes, they help keep ecosystems in balance by preying on rodents.

For a creature just four inches long, rough-skinned newts have a lot of personality – and Ricotta and Gnocchi are no exception. Rough-skinned newts are a type of salamander found up and down the west coast of the U.S. and British Columbia.

Eating worms, insects and other invertebrates, they live in moist forests, lakes, ponds and wetlands, their green-brown backs blending perfectly with leaves and water. Their bellies, though, are bright orange from chin to tail – a flashy warning to would-be predators. In fact, when threatened one single newt can produce enough tetrodotoxin (TTX) to kill 25,000 mice. The poison blocks signals between brain and body, causing numbness, dizziness, spasms, paralysis and eventually death.

Keepers give Ricotta and Gnocchi enrichment, like a big water pool full of worms and crickets to hunt.

“They’re really interested by foraging in water, and snap them up quickly,” said Standridge.

While the animals are fun to watch, there is plenty more to do in the Cheney Discovery Center!

There will be an activity table with games and puzzles, plus the puppet theater and the reading nook. While the center is good for all ages, the activities are best suited for children ages 3-8.

An on-site naturalist or volunteer will be available to answer questions about any of the animals in the wildlife park.

Previous Article
Next Article
labels:
You Might Also Like
Leaping back into the wild
Update, August 18th: Northwest Trek Wildlife Park released 124 endangered Northern leopard frogs earlier this week at the Columbia National Wildlife Refuge in Grant County. Keepers at Northwest Trek raised the frogs for 3 months from eggs through tadpole stage to froglets. This is a multi-agency partnership to help save this species that faces challenges like habitat loss, disease, non-native species, and climate change. By giving the frogs a head start and raising them free of predators, they are given a better chance of survival in the wild with the hope of establishing a new population of northern leopard frogs …
Learn More
Locating Amphibian Egg Masses
Locating Amphibian Egg Masses What species of amphibians are thriving in the Pacific Northwest? One way to find out is to locate and identify their egg masses, and March is a perfect month to monitor for amphibian egg masses in the ponds at Northwest Trek. Just north of the wildlife park is a 4-acre wetland mitigation site where this search frequently takes place. “This is an ideal place for monitoring egg masses,“ says Northwest Trek’s Conservation Program Coordinator Rachael. “Since the wetland’s restoration, we’ve identified eggs from seven of the eight monitored species of stillwater-breeding amphibians.” “The biggest diversity of …
Learn More
Frogs jump into the Wild
OTHELLO, Wash.– Hundreds of endangered northern leopard frogs leapt back into the wild at the Columbia National Wildlife Refuge in Grant County last week. The releases were made possible by a partnership of the Washington Department of Fish and Wildlife (WDFW), U.S. Fish and Wildlife Service (USFWS), Oregon Zoo, Washington State University (WSU), and Northwest Trek Wildlife Park. WDFW collected northern leopard frog eggs earlier this spring, and after months of growing at the Oregon Zoo and Northwest Trek Wildlife Park, the frogs were ready for release. Once abundant throughout North America, northern leopard frogs are rapidly disappearing from their …
Learn More
Raising Endangered Frogs
Focusing intently, Jessica stares into the swirling depths of a big black water tank. Summer sun reflects off the surface, air bubbles stir up the mid-layer and the bottom is in deep shadow. On first glance it’s nearly impossible to see that the tank contains over 100 plump, wriggling tadpoles. But Jessica – an animal keeper at Northwest Trek Wildlife Park – suddenly dives her bare arm into the water with a small net scoop. “There you are!” she says, pleased, and gently deposits one tadpole into a shallow net pen floating at the surface. It’s vet check-up time for …
Learn More
Eye of Newt
No, they don’t belong in a witches’ brew. Nor are they conclusive proof of nearby magic. But they do have superpowers of killing and healing, plus the ability to charm humans at a single, big-eyed glance. For a creature just four inches long, rough-skinned newts have a lot of personality – and Ricotta and Gnocchi are no exception. Recently arrived at the Cheney Discovery Center (currently closed due to Covid-19 restrictions), the two little newts aren’t related, though they live in the same fern-filled habitat and occasionally climb over each other. They also like interacting with humans, drinking in the …
Learn More
Monitoring for amphibian egg masses
Amphibians are excellent ecosystem monitors. If their populations are changing, you can bet something is happening in the habitat. That’s why Northwest Trek staff routinely survey the grounds for eight different species: rough skinned newts, northwestern salamanders, long-toed salamanders, Western toads, Oregon spotted frogs, red legged frogs, Pacific tree frogs and bull frogs. That data is regularly reported to the Washington Department of Fish and Wildlife to better protect and conserve the amphibians for the future. Northwest Trek’s recent temporary closure to help slow the spread of coronavirus has not stopped staff on grounds from monitoring for egg masses of …
Learn More
Finding frog eggs
On a clear spring day at Northwest Trek, Amy Newton is standing hip-deep in a chilly pond. Waterproof notebook and GPS in hand, she peers into the cloudy water. “Guys! We need your help over here – I think it’s a Pacific tree frog!” she calls. With the moon-walk gait of people who don’t want to squish anything, John Miller and Kim Bryant wade over and inspect. “Yeah, I think so,” pronounces Miller. “So cool,” adds Bryant, gently fingering the sloppy, Jello-like mass in the water. It’s Amphibian Egg Mass training day at Northwest Trek, and Miller, Newton and Bryant …
Learn More
Restoring Wild Places
Planting forest. Counting frogs. Healthy habitat makes for healthy wildlife, and that’s why it’s our goal at Northwest Trek to to improve and maintain wild habitat, both inside the park and in the broader community. Here’s what we’re doing right now – and how you can help. Habitat Restoration We strive to maintain quality habitat for wildlife both inside and outside of the wildlife park. On our five miles of nature trails we’ve cleared out pockets of diseased trees, replanting for a healthier and more diverse forest. We are restoring a large wetland on 100 acres of recently purchased land. We …
Learn More
See All Articles