Summer’s here – that means sun, splashing and celebrating Independence Day. Over at Northwest Trek’s Eagle Passage, though, we’re thinking about eagle feathers. From grooming to shedding to collecting and honoring, the feathers of America’s iconic symbol are important to all of us – and are helping give the two-year-old habitat a new summer look, too.

Well, it’s not her pool exclusively, of course. But the brand-new bathing pool in Eagle Passage is on Cheveyo’s side of the walkway by design, giving the one-winged eagle “warrior” (the meaning of her name, in Hopi) first dibs on splashing, bathing and grooming.

“Bald eagles have a strong relationship with water,” explains keeper Wendi. “They use it for hunting, drinking and keeping their feathers healthy. This pool gives our eagles opportunities for natural behaviors like bathing, and is good enrichment for them.”

At a depth of just one foot, the pool is deep enough to splash in but not dangerous for any of the eagles, who are all rescued from the wild with injuries that compromise their flying ability. So far Cheveyo has perched nearby to check it out – and visitors can easily see it from the walkway.

Another big piece of news is that Sequoia, our juvenile bald eagle, is starting to grow in her adult plumage, gradually getting that signature smooth white head, dark black coat and white tail feathers.

Her brown eyes and beak are becoming more golden as well, and her voice is getting higher-pitched, with the descending cascade of an adult eagle call – a little like a teenage boy’s voice changing, says Wendi.

She might also get a little less submissive, although right now Sucia is the dominant female of the foursome.

Eagles are fully mature at five years old, so at three years, Sequoia still has a while to go. But right now is a great time to watch the process.

“One of the neat things about zoos like Northwest Trek is that we get a front row seat to an animal’s lifecycle,” points out Wendi. “You can see all these changes close up.” 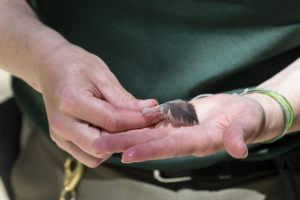 It’s not just Sequoia who is shedding feathers, though. All eagles molt after the breeding season in late spring or early summer, Wendi explains, and as keepers find feathers around Eagle Passage they carefully collect them to send to the National Eagle Repository. Located in the Rocky Mountains and run by the U.S. Dept. of Fish and Wildlife, the Repository stores eagle feathers – protected under U.S. law – to give to Native Americans who have a permit for their use in traditional or important ceremonies.

“Big or small, tail, wing or head, we collect them all,” says Wendi, carefully picking up a two-inch downy under-feather, fluffy in black and white. “We get hundreds every year, including from our golden eagles, and put them in a special padded envelope to send.”

Eagles shed worn feathers symmetrically, to preserve their unique flying ability. They’ll grow in new ones, a bit like us replacing a rain jacket that’s had some wear and tear.

Most of all, Wendi keeps in mind that many indigenous Americans regard eagles as elders, and along with our other keepers she treats them with deep respect as she cares for them daily.

“These eagles are someone’s elders, so I want to take care of them well,” she says. “It makes me happy to be a part of that.” 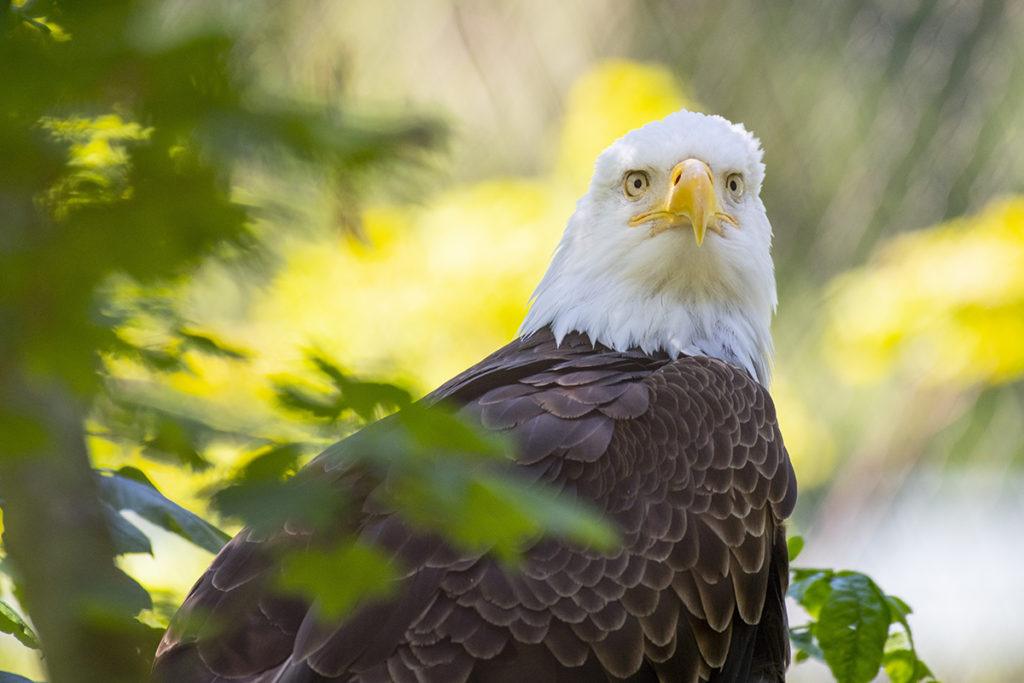