Four Fishers to the Forest 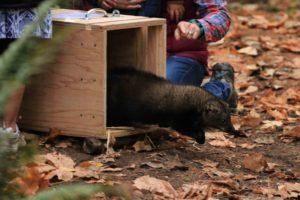 It was a glorious day to be a fisher. In the Gifford Pinchot National Forest, just south of Randle, Washington, fall leaves crackled underfoot and the November air was crisp. As a crowd of humans watched in hushed silence, the door lifted on a crate – and the first of four new Cascades fishers darted out into the ferns.

The latest chapter in the recovery of a species was being told.

“We are here today as partners in bringing fishers back to Washington,” explained Jeff Lewis, conservation biologist for the Washington Department of Fish & Wildlife. “Individually, as a species, fishers are a benefit as predator, as prey, as seed dispersers and soil fertilizers. But more than that, they’ve been a missing piece of the ecological puzzle. It’s going to benefit all species to have all the pieces of that puzzle.”

Lithe, furry mammals in the weasel family, fishers are native to the Northwest and historically ranged from the Cascades to Canada. But deforestation and demand for their thick, silky fur had sent fishers into extinction in Washington a century ago. Now, a partnership of agencies and organizations is helping to bring them back, trapping fishers in British Columbia and Alberta (where they are plentiful) and releasing them in the Olympics, North and South Cascades over the last decade.

The four at Randle brought the South Cascades total to 77 released fishers, with three more to come. Another 52 had gone to the North Cascades, with 28 still to come. Many had been fitted with a radio transmitter and located last spring via small plane to track their movements, survival and possible den sites, indicating reproduction. 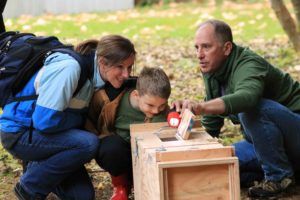 Lewis didn’t need to convince the 70-odd folks gathered that morning of the benefits of restoring fishers in the South Cascades. Co-leading the release was Tara Chestnut, ecologist at Mount Rainier National Park, and arranged around the circle were representatives from the many agencies and organizations that had partnered on the multi-year restoration project: WDFW, National Park Service, U.S. Forest Service, U.S. Fish and Wildlife Service, Conservation Northwest, Defenders of Wildlife, local residents, Nisqually Tribe, and Northwest Trek, which last year had raised $50,000 to help fund plane flights, as well as giving staff time. Many present had brought their children to witness the return of these agile native animals.

“This is so exciting,” said Karen Povey, Northwest Trek conservation engagement manager, who had brought her own camera. “We’re so happy to be supporting this project.” 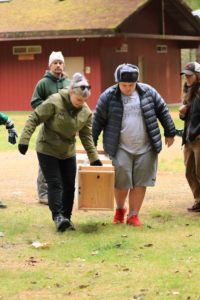 At last it was time. In single file the crowd walked a short way down a trail, carrying four large wooden crates holding the fishers, who had stopped at Calgary Zoo on the way here for vet check-ups. The crates were set down in a large, ferny glade, and Lewis and Chestnut invited the children to help lift the door. Cameras were positioned, and everyone held utterly still. Gently, hands slid the crate door open.

For a long second, nothing happened. A deep huffing sound came from inside. Then a small furry nose poked out, and in a single fluid movement the first fisher zigzagged out into the forest, a swift brown streak.

Three more followed, one taking so much time that Lewis and his helpers had to blow softly into the crate to encourage its occupant to leave. All eyes were wide, every child savoring the connection to the wild.

Finally it was over, and the crowd trooped back down the trail. Deep in the forest, four more fishers were finding homes – four more pieces returned to the puzzle.

“When we have a full slate of species, it makes ecosystems more resilient,” summed up Chestnut. “This is a really good thing.”

Previous Article
Next Article
labels:
You Might Also Like
Bring Back Grizzlies
Imagine – you’re hiking in deep Northwest forest. Silence and solitude surround you. Suddenly you round a corner and freeze – a grizzly bear is standing on the path. Actually, chances are that won’t happen. Biologists estimate there are fewer than 10 grizzlies in the North Cascades. – an area of nearly 10,000 square miles. And if we take no action, there will soon be none. We can’t let this happen to an American icon. Northwest Trek is joining Point Defiance Zoo & Aquarium, Woodland Park Zoo and other Friends of the North Cascades Grizzly Bear in endorsing one of …
Learn More
See All Articles