Taking a one-year-old for his physical check-up is not usually that difficult – unless, of course, he happens to be a 450-pound grizzly cub. Last week, Northwest Trek veterinarian Dr. Allison Case had not one but two enormous grizzlies to examine – so naturally enough, she made a house call.

On Thursday morning it was Hawthorne’s turn. Huckleberry had had his check-up on Wednesday, and all went well. Now, he was out in the bears’ forested habitat, intently chewing an elk hide treat, while Hawthorne lay peacefully on a cot bed in their sleeping area, anesthetized for the exam.

“We’re basically doing a one-year wellness exam of his whole body, plus giving him his preventative vaccines,” explained Case, as she examined Hawthorne’s bright black eyes.

Her breath steamed in the 38-degree air. Enclosed but with mesh doors open to the late-fall weather, the den is comfy if you have winter bear fat and a thick fur coat. The three keepers, operations helper, vet team and curator, however, were dressed in fleeces and hats. Hawthorne had three blankets (one of them electric) and wool socks on all four paws to keep him cozy during the exam.

Everyone spoke in soft voices.

“Lovely,” said Case, peering now at 36 gleaming bear teeth. “He’s lost all his baby teeth, and these are still maturing.”

Just before the team intubated him, Hawthorne heaved a big sigh, a cloud of warm bear breath straight into Case’s face.

“Yeah, he was just eating peanut butter,” added head keeper Haley Withers. “It was a treat to keep him calm while we set up for the exam.”

Case examined the big brown nose, felt inside each ear (the size of a human hand) and listened to Hawthorne’s heart.

“Around fifty beats a minute,” she noted to veterinary technician Tracy Cramer, who was taking notes. “These bears are just perfect. Now, the lump-and-bump check.”

“Wonderful, no need to trim these,” she said, brushing off some straw.

“He loves to dig,” agreed keepers.

As Cramer dug deep through the fur to take a blood sample, Withers moved on to cleaning out ear debris with a gauze. Just outside, Huckleberry ambled up to the mesh door, offering his elk hide to keepers and staring with interest at the scene inside.

After the routine vaccines (distemper, tetanus, rabies and leptospirosis), Case brought over the new digital ultrasound machine and laid it on a nearby stump. As Withers lay alongside Hawthorne to lift his hind leg, Case moved the wand to find his bladder for a urine sample.

“This means so much greater precision and medical care,” Case said of the new, laptop-size equipment, recently funded by the Northwest Trek Foundation. It had also raised funds for a portable digital x-ray machine, but with the cubs so young and healthy, radiographs weren’t necessary this time.

“We’ll do them at the next exam in three years,” explained Case.

Finally, all was done. Water splashed as Withers dampened Hawthorne’s tongue with a gauze, and the team began to pack up. Keepers built a recovery bed of straw, and Hawthorne’s seven humans carefully lifted him, still encased in blankets and a tarp stretcher, and slowly rolled him onto the straw to wake up.

As everyone else left, triple-bolting the main door behind them, Case and Withers remained to reverse the anesthesia. When Hawthorne swallowed, they pulled out his intubation tube, gathered the blankets and swiftly exited to the side, a keeper sliding and bolting the gate behind them.

Stretching, the grizzly bear got to his feet and looked around. Outside, his care team looked back in silent connection. 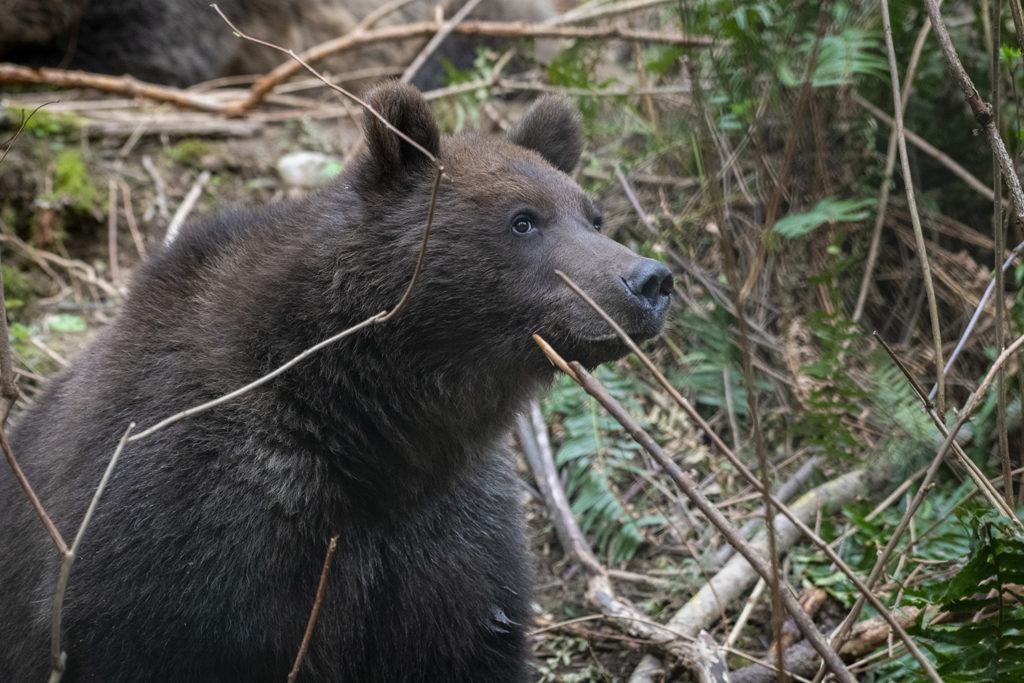