Going on a Slug Hunt 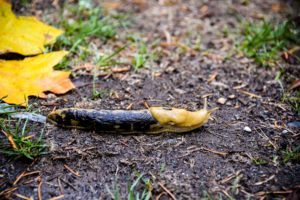 It’s a cool, wet spring morning at Northwest Trek, and keeper Wendi is cleaning out the fisher habitat. She scoops some poop, then bends down intently.

“Aha!” she exclaims, and reaches out a gloved hand.

It’s a banana slug, long, mottled and yellow – and Wendi scoops it up in all its slimy glory.

Slug Fest is coming, and Northwest Trek is getting ready.

One of the Wetlands keepers, she’s taking part in the staff’s Longest Slug Contest for the ever-popular annual Slug Fest event, this year on July 30 – 31.

It’s all part of the fun at Slug Fest, which celebrates this native Northwest creature with tentacles, slug crafts and a human slug race.

But for Wendi, real slugs are the coolest thing about Slug Fest. 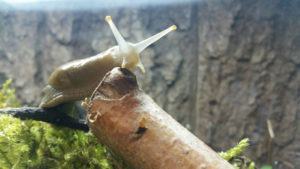 “I love animals that are not fuzzy, giant or charismatic,” she grins. “It’s easy to love a grizzly or a moose. But some of the ugliest animals are the most fascinating. Slugs have eye spots on their tentacles, and they get a ton of personality with their expressions. And they can learn. They excrete different kinds of slime for basic locomotion or defense, and they can learn what’s a threat and what’s not, despite not really having a brain.”

Slugs are mollusks, related to snails and even clams, mussels, squid and octopus. They move around on one giant foot, secreting slime to smooth their way. Breeding year-round, slugs are hermaphrodites (each animal is both sexes), lay up to 75 translucent eggs, hiding them in logs or leaves.

There are many kinds of slugs, of course, and Mello is quick to point out the difference between the ubiquitous black garden slug, which originally hitched a ride here from Europe and is now the bane of gardeners everywhere, and the majestic banana slug, king (or queen) of the Northwest forest, which eats only decomposing forest matter and is the second-longest land slug in the world (up to 9.8 inches).

“I call them nature’s garbage truck,” Wendi says cheerfully. “Poop, vomit, rot – they eat all that stuff. They cruise along, pick up nasty things and make the world a better place. They’re not pretty, but they’re essential.”

Which is why Wendi often finds them as she cleans up after other animals. You can also spot them near hiking trails in Northwest forests, especially on damp, cool days.

And of course, you can come to Slug Fest.

So what’s the coolest thing Wendi has seen a slug do?

“They can hang by their slime like Tarzan,” she says immediately. “I once found a slug hanging from one foot of slime from the roof. I have no idea why it was doing that, but it was extremely cool.”