Darci and "The Rock"

Blog Home
Darci and “The Rock”

But it was still a surprise when Northwest Trek veterinary staff discovered that Darci the gray wolf had accidentally swallowed a rock. What was amazing was how it came out – and how Darci helped them every step of the way.

“Hi, Darci, you’re okay. There’s a good girl,” called keeper Haley Withers, peeking through the window of a large metal crate in the back of a van.
A black nose appeared at the window, then a big white paw and some canine sighs.

Withers had come with Northwest Trek veterinarian Dr. Allison Case and veterinary technician Tracy Cramer on a cold winter’s morning as they drove Darci to Summit Veterinary Hospital in Tacoma.

But the journey had actually started a few months earlier, when Dr. Case had discovered a rock in Darci’s stomach during her triennial wellness check-up.

One x-ray wasn’t enough. On Dr. Case’s request, Withers and her colleagues built a sleeve for a portable x-ray plate, and trained Darci to hold her body against it at the mesh fence while Cramer took weekly x-rays – an impressive feat for a curious, energetic wild animal.

The rock, which keepers had nicknamed “Dwayne” after wrestler Dwayne “The Rock” Johnson, wasn’t moving.

So Darci was booked in at Summit (which regularly partners with the wildlife park on specialist treatment) for endoscopic rock removal.

Getting into the van also took Darci’s help. The six-year-old wolf hadn’t been in a crate since she’d arrived at Northwest Trek as a six-month-old pup, but after just two weeks of training with Withers, she knew what to do, hopping into the big box strewn with wood shavings in exchange for a treat.

Now, in the Summit parking lot, Withers distracted Darci at the front of the crate while Dr. Case darted her quickly with anesthetic at the back. A Summit technician wheeled out a gurney, and the team carefully lifted the 88-pound sleeping wolf onto it and took her inside.

“Totally fine,” replied Summit veterinarian Dr. Kelly McCord, positioning himself at Darci’s head with the endoscopic camera tube and screen that would let him peer into the wolf’s stomach. Around the small room Summit staff gathered in awe at the majestic animal breathing calmly on the table.

The camera snaked down Darci’s esophagus, and instantly a large gray object appeared between the pink walls on the screen.

“There it is,” said Dr. McCord, and his technician fed through a grasping, four-wire basket tool to grab the rock.

“I’m going to have to flush her stomach,” Dr. McCord said, finally.

A quarter-bucket of fluid later, Dr. McCord went back in. Dwayne didn’t move.

Dr. Case and Withers gently lifted Darci’s rear end, then her front. A technician put delicate pressure on her esophagus from the outside. Another found a bigger, six-wire basket tool in a cupboard tub marked “Foreign Body Removers.”

“There it is!” said Dr. McCord, finally, and in a flash the basket had snagged the rock and it was out.

Sure enough, the rock – as big as a ping-pong ball – was black and pitted. Everyone passed it around, marveling. Darci snoozed on.

“Thank you so much!” said Dr. Case to Dr. McCord and took Darci off the oxygen machine, ready to leave.

Out by the van, Withers readied the crate door for a swift closure while Dr. Case reversed the anesthesia and flushed water over the wolf’s big jaws.

An elderly couple walked past with their two dachshunds, here for treatment. The couple’s eyes widened. 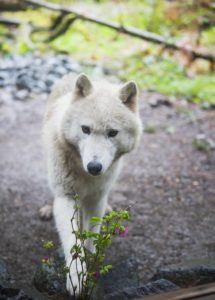 As the team explained about Northwest Trek, the dachshunds stared in the opposite direction, oblivious to the big gray wolf not ten feet away from them.

Then Darci stirred. Dr. Case pulled out her endotracheal tube and Withers locked the crate door. Darci was ready to go home – with an empty stomach.

“This just shows how vital our daily animal care is,” summed up Dr. Case. “We found this rock during Darci’s regular checkup, and her behavior training allowed her to help us give follow-up x-rays and specialist treatment. And this was the largest carnivore we’ve ever taken offsite for veterinary treatment.”

“Wolves do chew on things, without knowing the harm they could do, and those things can sometimes be accidentally swallowed,” explained Withers. “Our wolves live in a big outdoor space with lots of natural things around, like rocks. But Darci did so well with all of this. And she should be feeling a bit lighter now!”