Whenever Friday the 13th rolls around, even the least superstitious of us might look askance at a black cat or shiver at an owl hoot. But animal superstitions, although fun, can cause pretty bad luck for the wildlife who cross their paths. After all, we live in a world where 350,000 tourists can visit Scotland in one year just to try and spot the Loch Ness monster. If that same number of people all decided to hunt wolves or support the illegal trade in tiger parts, that would have a devastating effect on some amazing animals who are neither good nor bad luck – they’re simply making a home on planet Earth, just like us.

Here are seven animal superstitions that we’d love to toss over our shoulder this Friday 13th – and here’s how to meet those same animals at Northwest Trek Wildlife Park! 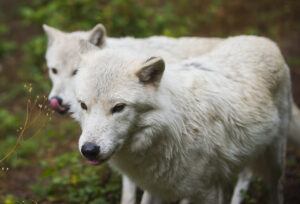 Let’s start with the Big Bad Wolf. A notorious character in European fairy tales, wolves are often seen as evil villains – although in Native American culture they’re revered and associated with courage, strength and loyalty. But when we villainize an animal, we make it easier to hunt it to extinction, which is what nearly happened to American red wolves. Gray wolves are also endangered in many parts of their historic range. When we lose wolves, we lose a key predator that keeps deer and elk numbers in check, in turn protecting grasslands and soil. Come meet our three gray wolves on the animal walking paths, and see for yourself how beautiful, smart and astonishing they are. 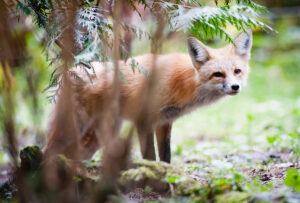 It doesn’t take much digging to find all the myths about foxes. Cultures as far back as the Inca Empire have seen this smart species as deceptive, secretive, mischievous and more. And if you failed to protect your chickens from a hungry mother fox, you might suffer some “bad luck”. But foxes have an important role in any ecosystem as both predator and prey for larger animals, ranging across continents and hemispheres. Our foxes live near the wolves, but are much harder to spot – keep looking! 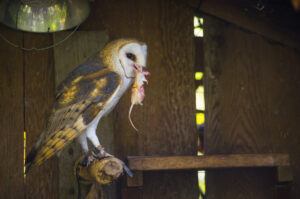 Owls have been associated with folklore and mythology since time immemorial. Sometimes seen as messengers of the dead, they are poached in some places for their talons, skulls, bones, feathers, meat and blood to be used in black magic. But really, owls are only bad luck if you happen to be a mouse! Making their homes in forests or near human habitation, they keep the rodent population down, hunting with keen eyesight. Our barn owl lives just past the Eagle Passage habitat. He’s nocturnal, but you can sometimes spot a keeper feeding him a frozen mouse! 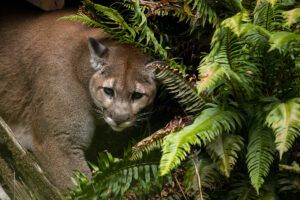 Belief that black cats bring bad luck goes back a long way – although in Japan they’re seen as good luck, especially for single women. And wild cats like our cougar, lynx and bobcats are often feared as Northwest forest predators. But the truth is that wild cats don’t hunt humans – they’re looking for easier prey, like deer, small mammals, rodents or birds. If you see a cougar in the forest, you’re actually incredibly lucky, as they tend to stay hidden. Just stop, pick up small children, face the cougar and make yourself look bigger if you can, using a coat or pack. Shout and fight back if it attacks, and it will usually flee. But even on Friday the 13th, your chances of that encounter are very slim: Washington state has only seen two fatal cougar attacks in the last century. Instead, you’ll have much better luck spotting our cats on the animal walking paths! 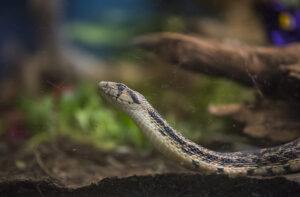 Where do we start with snakes? Some cultures see them as good luck, animals to be worshipped and revered. Others see them as incarnations of Satan or having magical abilities. And while a snake dropping from the roof or giving you a venomous bite is not good fortune, it’s important to love and respect these reptiles for keeping the rodent population in control, which in turn controls diseases that affect humans. Our Northwest Trek gopher snake lives in the Cheney Discovery Center (temporarily closed), plus many more in the surrounding forest: they’re harmless and very shy.

“Eye of newt and toe of frog…” If you associate newts with witches, you’re not alone. In giving his witches that line in “Macbeth,” Shakespeare was just following a popular belief that linked these adorable little amphibians with black magic: good luck for witches, bad luck if you were on the receiving end of the spell. In reality, newts are only bad luck if you eat them. When threatened by predators like bullfrogs, one single newt can produce enough tetrodotoxin (TTX) to kill 25,000 mice. The poison blocks signals between brain and body, causing numbness, dizziness, spasms, paralysis and eventually death. Humans can safely handle them, though you need to wash your hands afterwards. Our newts Ricotta and Gnocchi live in the Cheney Discovery Center (temporarily closed).

Wolverines are tenacious, smart predators who can survive in extreme conditions, eat almost anything (including frozen carcasses) and fight almost any animal. So it’s only natural that they’ve had some pretty big stories told about them. Early trappers told of near-mythical ferocious beasts, Native Americans saw the wolverine as a trickster-hero linked to the spirit world, and of course modern-day comic books and films created an entire superhero with magical powers. The fact that wolverines are shy and rare, hard to find in the wild, has only added to the mystery. But you don’t need luck to spot wolverines at Northwest Trek: Siblings Rainier and Ahma roam their big forested habitat daily.