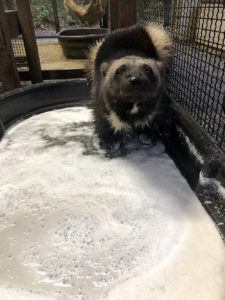 To most of us, a cold bubble bath outside at 8 a.m. doesn’t exactly sound appealing. But add some yummy raw chicken treats and an encouraging caregiver, and Rainier the wolverine was ready and willing. But this wasn’t just a fun spa day. The bath was part of a months-long training to let the furry wolverine help his human team at Northwest Trek Wildlife Park care for his itchy skin.

“Hi, boy!” called keeper Wendi Mello, as she walked up to the undercover “bedrooms” where the wolverines spent each night.

Rainer instantly ran up to the mesh, face curious and eager for breakfast. Mello fed him a raw chicken meatball, then squatted down next to a filled tub of plain water, cold in the early winter morning.

Rainer hesitated. Mello dropped a tiny bit of chicken into the pool. Instantly, Rainier hopped in with front paws, his back ones still propped on the tub’s edge.

Mello laughed. “Come on!” she said encouragingly. “All four feet. Pool!”
With a splash the wolverine slipped completely in, water sliding easily off his thick black fur, and Mello gave him a chicken reward.

“It’s a process,” explains Mello. “I started this training with him about three months ago, when we noticed him having some itchy skin. Dr. Allison Case, our veterinarian, prescribed an oatmeal bath to soothe it, and so I began working with Rainier in tiny little steps so he could take part in his own treatment.”

Those steps really were tiny. First Mello asked Rainer to get into a dry tub, with treat rewards when he had all four feet inside. When he was comfortable with that, she put in one inch of water. Then two. Then three, and four. Wolverines are smart animals, and while they’re not exactly adapted for swimming – their natural range is above the snow line, where pools of water are often frozen – they definitely don’t mind getting wet and cold. They’re also very playful animals, and love rolling around in snow and ice.

The next step, though, was visually challenging. The oatmeal bath mixture, which also has coconut oil for extra moisturizing, frothed up a lot when added to the tub – not a sight the wolverine was used to seeing, let alone bathing in. So, inch by inch,

Mello encouraged him to try it, rewarding each step of the way and constantly allowing him to run back and hop in the plain water for more rewards, just to remind him that baths were, in fact, fun.

On this cold morning, the pair continued the training.

Closing off that part of the bedroom, Mello poured some oatmeal liquid into the second tub and filled it to a frothy brim with the hose. Then she exited and opened the inside door again.

“What do you think, hey?” she asked Rainier enthusiastically. “Shall we try it?”

Squatting by the oatmeal tub, she called “Pool!” and pointed.

Rainier ran up – then stopped. Sniffed. Nosed around the bubbles. Mello threw in a chicken morsel, and instantly the wolverine plopped two paws into the bubble bath to find it.

“Good!” said Mello, and gave another treat. “It’s a juggling act: You really want to reward the full behavior, but you also want to encourage steps in the right direction. It’s all about timing and balance.”

It’s a technique many pet-owners will know, and one that zookeepers practice constantly as they work with animals on behaviors that help physical or mental well-being, offer enrichment or make possible their own health-care, such as voluntary blood sampling.

In fact, Northwest Trek’s black bears also had oatmeal baths this summer, after keepers noticed them itching as well (a common occurrence when thick fur meets summer seeds and grasses). Unlike Rainier, they did need a 70-plus-degree day, but when it came Benton and Fern were ready to jump in, even fighting a little bit for who got in first, said keeper Haley Withers.

Now, after a few two-paw tries at the bubble bath, Mello walked Rainier back to tub number one for some easy chicken rewards. Then it was back to tub two for another go at the bubbles. This time, Rainer got three, then all four paws into the frothy white water, with an extra bubble “moustache” on his snout.

A few minutes later Rainier was done. Coated in healing, snowy-white oatmeal bubbles, he wandered back into his bedroom and began rolling goofily round on some straw.

“I love this, because he’s treating himself,” she said. “He’s the driver of his own care. We can all relate to how empowering that is with our own healthcare, to be part of the solution. Plus, this training really builds great relationships between animals and keepers.”

And as Rainier ran out to explore the outside habitat for the day, Mello emptied the tub, ready for next time. 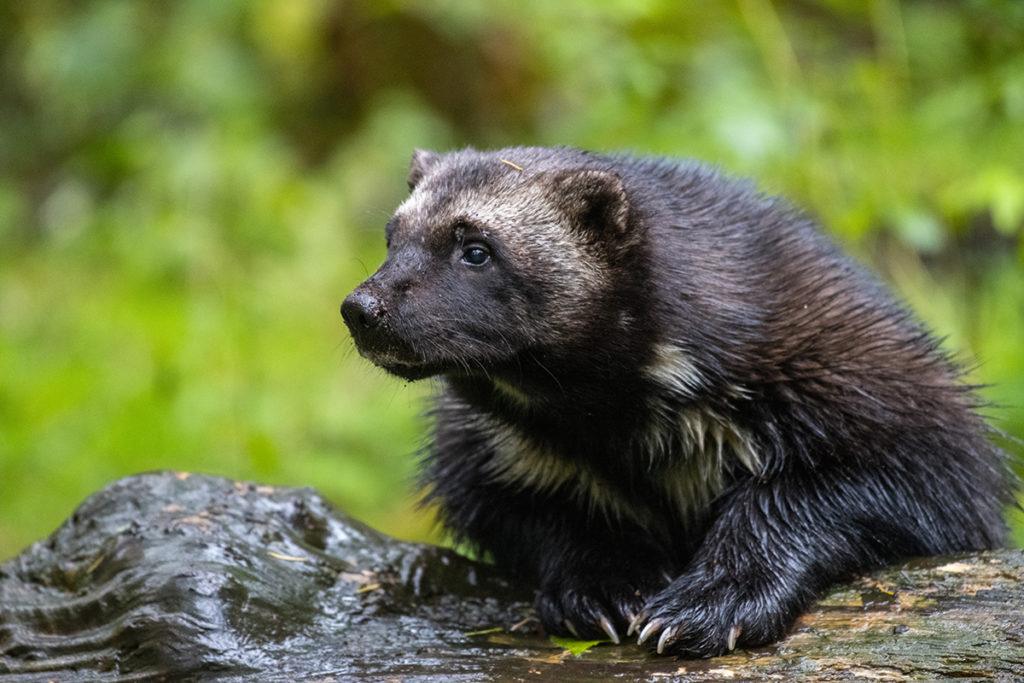