Vet Visit for a Bison Bull

Keeper Dave Meadows stood 30 feet from a massive bull bison. Fully-grown, the bull weighed around 2,500 pounds – just a bit less than a Mini Cooper – and stood solidly on the rutted track in Northwest Trek’s Free-Roaming Area. His breath steamed against his thick, shaggy fur. Then he opened his mouth, tongue lolling, and gave a long, growling bellow.

“Come on! Heeeeere, boy,” called Meadows, and rattled a bucket of feed.

The bison bull stared for a long moment. Then he lowered his 200-pound head and ambled toward Meadows. Swiftly, the keeper stowed the feed bucket back in the truck, hopped inside and reversed carefully back down the track.

The bull took a few more steps. Then he slowed to a halt, and Meadows began the whole thing again.

It was time for hands-on veterinary work with one of the biggest, most powerful animals at Northwest Trek – a once-in-a-decade event that took skill, teamwork and caution.

Getting to sleep – safely

“I’ve got it,” Dr. Case reassured him – and the other keeper, veterinary technician, guest veterinarian, animal curator and intern standing nearby edged closer to their vehicles, just in case.

After half a mile of backing down the track, Meadows had enticed the bull bison to a flat, dry spot that was safe place to anesthetize. After Dr. Case had darted him with the sedative, the bull was now standing by Meadows’ truck, looking very sleepy.

Inching carefully behind him, Dr. Case plucked out the dart before he could sit down. Everyone sighed with relief. Slowly, Meadows moved the truck away from the bull as Dr. Case hovered, watching.

The bull’s eyelids lowered. He sank to his chest. Dr. Case instantly stepped in to prop up his enormous withers, her hands sinking into the dense shaggy cape.

Meadows and curator Marc Heinzman were there in a flash, bracing against the bull’s weight to keep him upright. Swiftly, keeper Deanna Edwards and intern Emily Palin hauled over two hay bales as ballast, with one more to support the bull’s head. Veterinary technician Tracy Cramer fitted oxygen tubes into the fist-sized nostrils, while Dr. Matt Brim, director of emergency medicine at nearby Summit Veterinary Referral Center who was shadowing today’s procedure, readied the supply tote that Cramer had spent an hour prepping yesterday.

Getting hands-on with a mature bull bison is a rare veterinary event at Northwest Trek, happening once every 10 years. Bison are examined as calves, and given vaccines and ear tags at one or two years old. After that, the males are mostly very sturdy, almost never needing close-up veterinary care – unlike other animals like moose or mountain goats.

But in the past week, Meadows and Edwards had spotted something wrong with the bull’s left eye. It was swollen, leaking discharge and clearly not healing on its own.

“It happens,” explained curator Marc Heinzman. “These are animals that live in social groups, and have conflicts, just like us. Sometimes they choose to resolve them in physical ways, especially now in rut season.”

In rut (breeding season), bulls often spar with each other for herd dominance. A bison’s shaggy shoulder fur is incredibly thick, designed to protect it from the foot-long horns of its opponent – the horn hits the spongy fur and glances off. But in this case, one hit a less-protected area: the upper eyelid.

Examining it earlier through binoculars, Dr. Case couldn’t see anything wrong with the cornea – a big relief. But she was worried a foreign object might be lodged inside the lid – or something worse. So the procedure was scheduled, and the team lined up for a crisp, dry December morning.

Treating from inside and out

As Edwards slid a mat underneath, Dr. Case lay on her side face to face with the bull and began to probe. Working delicately, she cleaned off mud and minor scabs, examining both eyelids and wiping discharge off the bison’s blue-black skin. Her breath clouded the air, which hovered just above freezing.

Meanwhile, Dr. Brim was drawing up three big syringes of antibiotic, and Meadows scanned the bull’s ears for ID tags placed when the bull was a calf. None were visible: not surprising for an animal that frequently rubs on trees and spars with other animals.

“Good news – zero lesions on the cornea,” Dr. Case pronounced. “And I don’t see any foreign body. Clearly, he got bumped pretty badly, poor guy. But we’ll make it better.”

As Dr. Case coated the eye with ointment, Cramer began injecting antibiotics and supplements into the bison’s rump. His sides heaved with regular breaths, exuding a steamy warmth that smelled vaguely of horses. Then, gently, Cramer drew a syringe full of blood from beneath the bull’s tail, for later analysis and banking.

Finally, Dr. Case was done, and slid herself out to make room for Edwards, who shaved a section of soft, thick ear before Meadows clipped on a new white ear tag. Dr. Case then injected a microchip – multiple ways of identifying this massive animal to monitor and care for him from a distance.

“Ok then,” said Dr. Case, and as the team packed everything away she gently injected the drugs to reverse the anesthesia.

Everyone backed up. Dr. Case hovered behind the bull’s blind spot, hands ready. All was silence, save for an energetic bird in a nearby treetop. The bull’s nostrils twitched. He huffed, twice.

Then he lifted that huge, 200-pound head.

Quick as a flash, Dr. Case whisked away the fabric blindfold over his eyes. Dr. Case tiptoed back, watching keenly for any problems.

A grunt. Several blinks of the newly-clean eyelids. Then in one clean movement the bull hoisted to his feet, wobbled a little, then plodded off into the trees to graze.

“That went just as smoothly as we ever could have hoped for,” sighed Cramer, as Dr. Case kept a watchful eye on the bull.

Then she too turned and exhaled. “Thank you, everybody!” she called, smiling. “Great teamwork. I’m really happy. He has scrapes and abrasions, but he’ll heal, treated from the inside and out.”

Keepers hoisted the bales back into the trucks. Then everyone slowly drove out of the forest, where the bull bison was already out of sight between the trees. 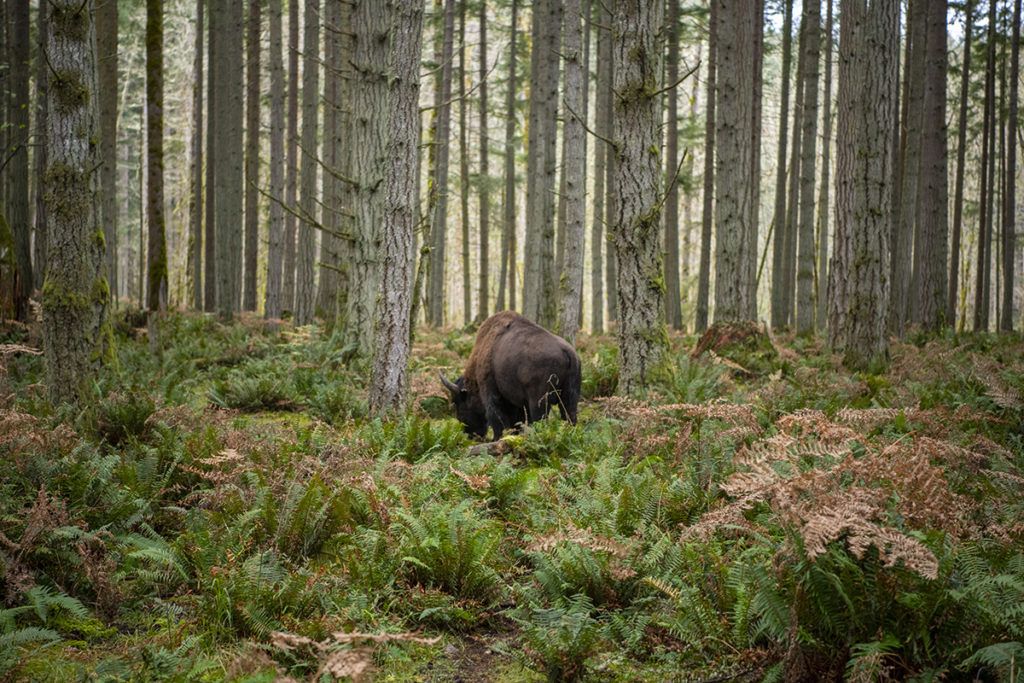