UPDATE 7/14/20: We are saddened to report that Macklin unexpectedly passed away yesterday from internal complications. He will be deeply missed.

Northwest Trek Wildlife Park has a new fisher in the Forest & Wetland habitat, just in time for the park’s reopening on June 18.

Macklin is an 8-year-old male fisher from British Columbia – and he also tells an incredible story of conservation and care.

Fishers, furry mammals in the weasel family, are native to the Northwest and historically ranged from the Cascades to Canada. But deforestation and demand for their thick, silky fur had sent fishers into extinction in Washington a century ago. Since 2008, a partnership of agencies and organizations has helped to bring them back, trapping fishers in British Columbia and Alberta (where they are plentiful) and releasing them in the Olympics, North and South Cascades over the last decade. The last of over 250 translocated fishers were released in January 2020, completing the final phase of the reintroduction program.

Macklin was one of those fishers trapped in British Columbia. There are strict restrictions for the health of fishers that are relocated, and Macklin was deemed non-releasable. His teeth didn’t meet the requirement, and there were fears he wouldn’t survive much longer in the wild. Already captured and under human care, Macklin needed a new home in captivity. He made a pit stop at the Calgary Zoo before arriving at Northwest Trek.

“When he arrived, we noticed he had a limp, likely from his years spent in the wild,” said head veterinarian Dr. Allison Case. “An MRI confirmed he has a back disease that’s common in dogs, specifically dachshunds, called intervertebral disc disease.”

Intervertebral disc disease occurs when there’s a breakdown of one or more of the discs that separate the bones of the spine, causing pain in the back. 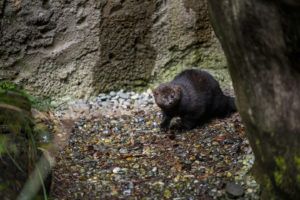 “If you look closely, you will still notice Macklin’s limp, but with this treatment he is walking much better than when he first arrived,” said Dr. Case. “He would have not lasted much longer in the wild and we are happy he is here at Northwest Trek where we can ensure he has the best quality of life.” 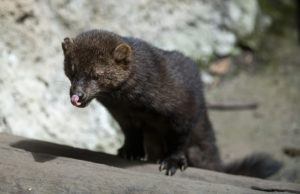 Before going on exhibit, Macklin spent a few months behind the scenes at Northwest Trek adjusting to his new environment.

“He’s had a lot of transition over the last year and we wanted to give him time to get comfortable here before we introduced him to the public,” said Northwest Trek keeper Miranda Mauck. “Now he’s doing great.”

Minnie, the park’s 12-year-old female fisher, passed away recently after a fight with thyroid cancer.

Fishers for the future

Northwest Trek Wildlife Park will continue to partner with the Washington Department of Fish and Wildlife and help fisher recovery. While the final phase of the reintroduction program has ended, the project will now focus on monitoring efforts to determine their locations, survival status, and movements, as well as a potential additional release of 10-15 fishers to the Olympics to infuse new genetics into the population.