As Mountain Goats are Moved From the Olympics, Zoos Provide Homes for Goat Kids Without Known Mothers

“Our plan is to translocate nanny-kid pairs when possible,” said Rich Harris, Washington Department of Fish and Wildlife statewide mountain goat manager. “But when young goats cannot be paired up with their mothers, experience from other mountain goat translocation projects is that their survival rates are low.”

Case and Northwest Trek veterinary technician Sara Dunleavy set up a temporary clinic to focus on the goat kids. Working swiftly, they examined each one, recorded its weight, determined its gender, placed a microchip and ear tag, collected blood, took cultures and nasal swabs to check for disease, and administered vaccines and antibiotics. 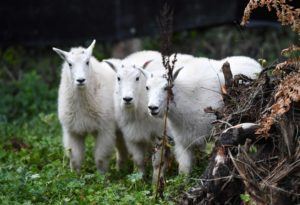 “Mountain goats translocated at a young age are more likely to survive in human care than in the wild,” Case said. “We’re delighted to provide goat kids with great homes at Northwest Trek, Woodland Park Zoo and other zoos.” The young goats destined for Northwest Trek will wander at will through the meadows and forests of the wildlife park’s 435-acre Free-Roaming Area.

Oregon Zoo staff are coordinating placement at zoos for additional goat kids. Animal-care teams from Northwest Trek, Woodland Park Zoo and Oregon Zoo are teaming up on their transport.

“We’re pleased to participate in this regional effort in cooperation with our colleagues in Washington and state and federal agencies,” said Amy Cutting, animal curator at Oregon Zoo. “We are all coming together in the name of conservation.”

State and federal officials were pleased when regional zoos stepped up to help, offering homes for young goats and sharing their animal-care expertise, Harris said. “We’ve partnered with Northwest Trek, Woodland Park Zoo and Oregon Zoo on many conservation projects, from Oregon spotted frog and Western pond turtle reintroduction to bat and fisher monitoring, so it was a natural to team up again.” 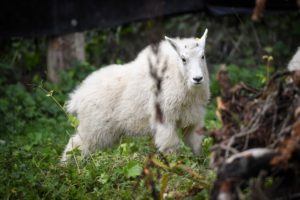 “As part of our commitment to saving wildlife, including species recovery in the Pacific Northwest, we are dedicated to ensuring exemplary animal welfare and to providing a home for young goats to ensure their chances of survivability,” said Dr. Jennifer Pramuk, an animal curator at Woodland Park Zoo.

By late Thursday, four male kids without identifiable mothers had been taken to Northwest Trek. Zoo officials have not determined where these particular goat kids will live long-term. Northwest Trek can provide a permanent home for up to five goat kids; Woodland Park Zoo can care for up to two.

This effort to translocate mountain goats from the Olympic Peninsula is a partnership between the National Park Service (NPS), the Washington Department of Fish & Wildlife (WDFW), and the USDA Forest Service (USFS) to re-establish and assist in connecting depleted populations of mountain goats in the Washington Cascades.

Area tribes lending support to the translocation plan in the Cascades include the Lummi, Muckleshoot, Sauk-Suiattle, Stillaguamish, Suquamish, Swinomish, Tulalip, and Upper Skagit.

This month’s two-week effort to move mountain goats to native habitat in the northern Cascades is the first translocation operation. Additional efforts are planned next year. Mountain goats were introduced to the Olympics in the 1920s. For more information about mountain goats in Washington, go to wdfw.wa.gov/living/mountain_goats.

From the Sept. 7, 2018 press release from the National Park Service, U.S. Forest Service and Washington Department of Fish and Wildlife:

Agencies Plan to Start Translocating Mountain Goats From the Olympics

Starting September 10, a coalition of state and federal agencies, with support from local tribes, will begin translocating mountain goats from Olympic National Park to the northern Cascade Mountains to meet wildlife management goals in both areas.

This effort to translocate mountain goats from the Olympic Peninsula is a partnership between the National Park Service (NPS), the Washington Department of Fish & Wildlife (WDFW), and the USDA Forest Service (USFS) to re-establish and assist in connecting depleted populations of mountain goats in the Washington Cascades.

In May, the NPS released the final Mountain Goat Management Plan which outlines the effort to remove the estimated 725 mountain goats on the Olympic Peninsula. Both the plan and the associated environmental impact statement were finalized after an extensive public review process which began in 2014.

This month’s two-week effort to move mountain goats to native habitat in the northern Cascades is the first translocation operation since the release of the final Mountain Goat Management Plan. Two additional two-week periods are planned for next year. Mountain goats were introduced to the Olympics in the 1920s.

While some mountain goat populations in the north Cascades have recovered since the 1990s, the species is still absent from many areas of its historic range.

Aerial capture operations will be conducted through a contract with a private company that specializes in the capture and transport of wild animals. The helicopter crew will use tranquilizer darts and net guns to capture mountain goats and transport them in specially made slings to the staging area on Hurricane Hill Road beyond the Hurricane Ridge Visitor Center in Olympic National Park. The staging area will be closed to public access.

The animals will be examined by veterinarians before WDFW wildlife managers transport them overnight to staging areas in the north Cascades for release the following day.

During this first round, WDFW will only translocate goats from the park to non-wilderness release sites in the Cascades. There will be no closures for release operations in the national forests in 2018. To maximize success, goats will be brought directly to alpine habitats that have been selected for appropriate characteristics. To access these areas, goats will be airlifted in their crates by helicopter.

WDFW plans to release the mountain goats at five selected sites in the Cascades this month. Two release areas are near mountain peaks south of the town of Darrington, on the Darrington District of the Mt. Baker-Snoqualmie National Forest (MBS). The others are near Mt. Index, on the Skykomish Ranger District of the MBS, Tower Peak in the Methow area of the Okanogan-Wenatchee National Forest, and the headwaters of the Cedar River Drainage, which is land owned by Seattle Public Utilities.

“The translocation effort will relieve issues with non-native mountain goats in the Olympics while bolstering depleted herds in the northern Cascades,” said Olympic National Park Superintendent Sarah Creachbaum. “Mountain goats cause significant impacts to the park ecosystem as well as public safety concerns.”

Mountain goats follow and approach hikers because they are attracted to the salt from their sweat, urine, and food. That behavior is less likely in the north Cascades where visitors are more widely distributed than those at Olympic National Park, said Rich Harris, a WDFW wildlife manager who specializes in mountain goats.

“In addition, the north Cascades has an abundance of natural salt licks, while the Olympic Peninsula has virtually none,” Harris said. “Natural salt licks greatly reduce mountain goats’ attraction to people.”

Along with the staging area closure on Hurricane Hill Road, several trails in Olympic National Park will be closed for visitor and employee safety during helicopter operations. For more information and updates, visit the NPS website.

Previous Article
Next Article
labels:
You Might Also Like
Name our Goat Kid
It’s not every day you get asked to name someone else’s kid. But Northwest Trek Wildlife Park is inviting the public to help name theirs – a mountain goat kid, born May 29 in the Free-Roaming Area. The female kid was born to mom Bailey, one of five goat kids that arrived at Northwest Trek Wildlife Park in fall 2018 under a multi-agency project to relocate non-native mountain goats from Washington’s Olympic Mountains to the North Cascades where their populations were depleted. Northwest Trek partnered with Woodland Park Zoo and Oregon Zoo to provide permanent homes to goat kids without …
Learn More
BABY BOOM AT NORTHWEST TREK
Northwest Trek’s springtime baby animal boom is on! A mountain goat kid, three elk calves and three bighorn sheep lambs were all born in May at the wildlife park and can be spotted in the 435-acre Free-Roaming Area. More animal births are still expected as well. Over the Memorial Day weekend, the mountain goat kid was born to 3-year-old mom, Bailey. Zoological Curator Marc Heinzman said keepers are closely monitoring the new family. “Keepers have seen the kid nursing and spending time moving around with its mother Bailey,” said Heinzman. “The pair is spending a lot of their time up …
Learn More
See All Articles