To an outsider, it didn’t look unusual. As two keepers stood still inside the Forest & Wetlands habitat at Northwest Trek, they watched an old beaver slowly make his way into the pool. Sniffing everywhere, he walked slowly but steadily. Then he swam with front paws and whiskers outstretched to feel for the underwater entrance to his lodge before slipping inside.

“There you go!” called one keeper encouragingly.

R.B. Beaver, affectionately known as “Papa” for his role in the Northwest Trek beaver family, had just successfully shown that he could live a comfortable, capable life – without his eyesight.

“The cataracts started a few years ago,” explained Dr. Allison Case, veterinarian at the wildlife park. “That’s fairly normal with his age.”

Papa Beaver is 17 years old, the fifth oldest beaver in human care in the United States. As the median life expectancy for wild beavers is 10-15 years, he’s doing extremely well. But he does have some age-related health issues – like deteriorating eyesight.

Dr. Case and keeper staff monitored the cataracts as they advanced, watching for any signs of pain or impacted movement.

Then came the emergency. One December day in 2019, a cataract in Papa Beaver’s left eye caused his lens to luxate (or turn) anteriorly through the iris. It’s an emergency condition that leaves the lens without any moorings, causes intense eye pressure and pain, and can lead to blindness.

In dogs or cats, the lens can be removed, preserving some vision of light and darkness in the eye. But a beaver’s eye is far too small for this procedure. It’s never been done, says Dr. Case.

Even worse, Dr. Case was out of town at the time. So veterinary technician Tracy Cramer and the keeper team hastily brought Papa to the clinic at Point Defiance Zoo & Aquarium (the sister zoos often share staff, equipment and knowledge.)

Papa recovered well after the surgery, moving back into the habitat with his mate and son, and navigating as normal. But it wasn’t a situation the Northwest Trek animal care team wanted ever to happen again.

“The right eye cataract was getting worse, and could do exactly the same thing at any time,” Dr. Case said. “It would have caused him a lot of pain, and another emergency surgery, which we never want.”

So Dr. Case, zoological curator Marc Heinzman and Papa’s keepers all met to discuss the other option: Pre-emptive removal of his right eye.

“It’s a big decision,” says keeper Wendi Mello. “Rodent eyesight is poor anyway – beavers mostly rely on smell, touch and some sound to navigate. A lot of the time, they’re dragging logs around in very muddy water, or in a dark lodge, so having great vision isn’t necessary for them.”

“And of course, the cataracts have been gradually dimming his eyesight for years,” adds keeper Miranda Mauck. “But to go completely blind, that’s a big move, and we wanted to make sure it was the best thing for him.”

Of all the beavers, Mello notes, Papa was the most likely to cope well with a change in vision: He’s calm and mellow, and is hand-fed a lot anyway because of tooth loss and other age-related issues. And he was born at Northwest Trek, so knows the habitat like the back of his paw.

So last month, Dr. Kice removed Papa’s other eye in a planned surgery – which proved exactly the right decision.

“Under examination, we discovered that his right eye lens was starting to rotate toward luxation,” said Dr. Case. “It was a relief that we had made the right choice.”

Back in Beaver World

After his surgery, Papa Beaver recovered well at the veterinary clinic, and was brought back to his home. Mello and Mauck had taken the other two beavers behind the scenes to give him plenty of space to settle in. As he wandered out of the crate, he instantly began scouting the perimeter, tiny nose sniffing hard, whiskers twitching. His hind feet were steady while front paws felt out rocks, sand and the water’s edge.

Within ten minutes he was diving unerringly into the lodge entrance, nibbling on the fresh branches put there by keepers, cruising back out past the visitor windows and even climbing onto a rock island – a first.

Keepers had built a log ramp in the lodge with mulch at the bottom, but he didn’t seem to need it.

“He’s doing so great,” smiled Mello, as Papa started calmly grooming his tail. “He’s swimming confidently and seems very comfortable. And when his family joins him, he’ll have that social comfort as well. We’re really happy we can make sure he won’t be in pain, and make his life better.” 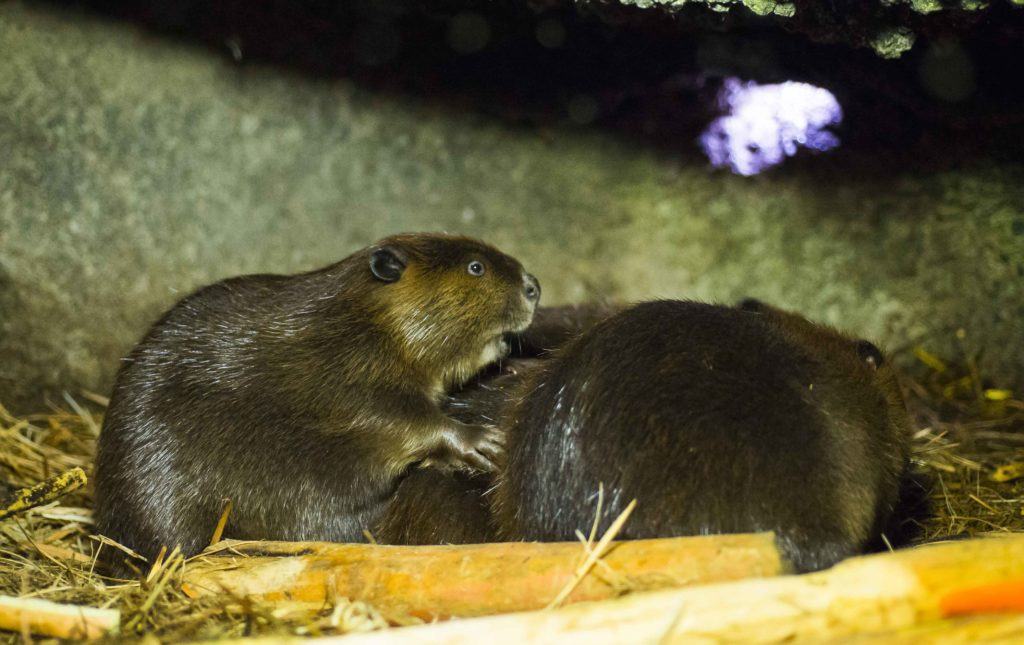