There’s a new cat in town at Northwest Trek.

Nuka, a young Canada lynx who recently arrived at the wildlife park, has just made her public debut and will move on and off exhibit as she settles into her new home here.

She’s also playful – and a delight to care for, say Northwest Trek staff. 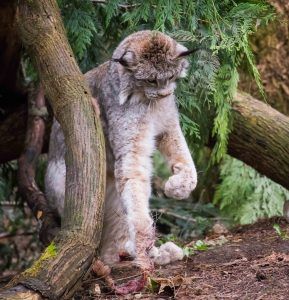 “She’s so spunky,” said keeper Haley Withers, who helps care for Nuka. “When she knows we’re there, she runs over. And she loves birds – stalking them, chasing them.”

She also likes stalking keepers, said fellow keeper Angela Gibson. “She hides behind things and follows us. And she loves to bat things around, like any cat.”

“She is a perfect, beautiful lynx,” said Northwest Trek veterinarian Dr. Allison Case, who gave Nuka a full exam soon after her arrival.

With their thick speckled fur, black-tufted ears and huge paws for stalking prey on snow, Canada lynxes are stunning cats to look at – and Nuka is no exception. But it’s not just her playful nature and good looks that make her a draw at Northwest Trek. Nuka is also part of a strategic breeding plan that ensures healthy diversity and survival of the zoo-based lynx population.

The Species Survival Plan, managed by the Association of Zoos and Aquariums, is a long-term project in which AZA-accredited zoos – like Northwest Trek – collaborate to make sure that endangered and threatened species continue to thrive. 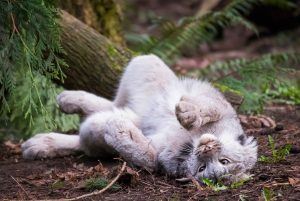 Nuka’s a part of that plan.

At 21 pounds, Nuka is just a bit smaller than Omak, her intended mate, and is young and healthy. Time will tell, though, how well the two cats will settle in together.

“We are hopeful that they may successfully mate in the future,” said Northwest Trek Zoological Curator Marc Heinzman.

Canada lynx are endangered in Washington. The species is pressured by a number of factors, including the 2017 forest fires that destroyed much of their native habitat in Okanogan County, according to the Washington Department of Fish & Wildlife.

Find Nuka, along with her fellow carnivores, on the paved walking trails leading out from our visitor entrance.