This Zookeeper Week, we shadowed Hannah and Armando, two zookeepers at Northwest Trek Wildlife Park. Hannah and Armando are raising 260 endangered Northern leopard frogs from egg to froglet stage, until they can be released back into the Washington wild to boost the native population.

Due to habitat loss, disease, pollution, climate change and invasive predators like bullfrogs, Northern leopard frogs are close to extinct in Washington and Oregon. Now, there’s just one place in Washington where they’re found: the Potholes Reservoir in the Columbia Basin Wildlife Area.

Later this summer, the frogs will leave Northwest Trek and be released back to their home wetlands for a head start on life. We asked Hannah and Armando about their experiences in zookeeping, caring for the frogs, and what working with animals and wildlife means to them. 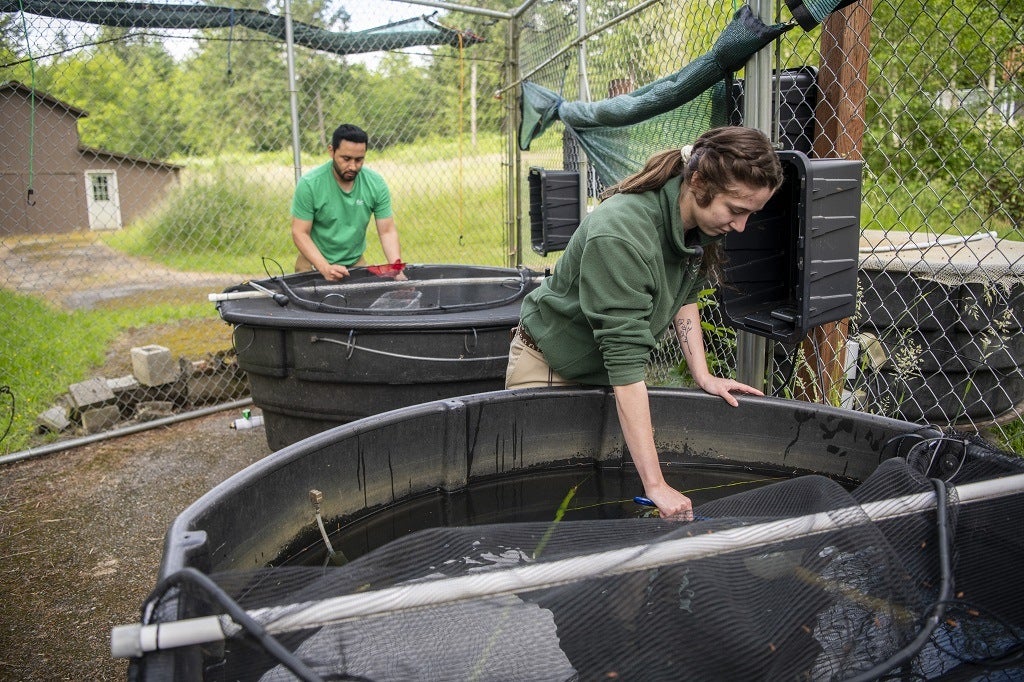 Q: What is your favorite part of the job?

Hannah: I love watching the animals grow up and seeing all the life stages. It’s been incredibly fulfilling watching the Northern leopard frogs go from egg masses to fully grown frogs. Raising them has ignited a passion for conservation and native wildlife in me.

Armando: I love waking up every day, knowing that I get to work with animals at Northwest Trek. I used to work in construction and did not look forward to it. Now, I wake up happy and excited! I’ve fallen in love with Northwest Trek’s environment, including the animals, the people, and the constant opportunities I’m given to study and learn about different species every day. 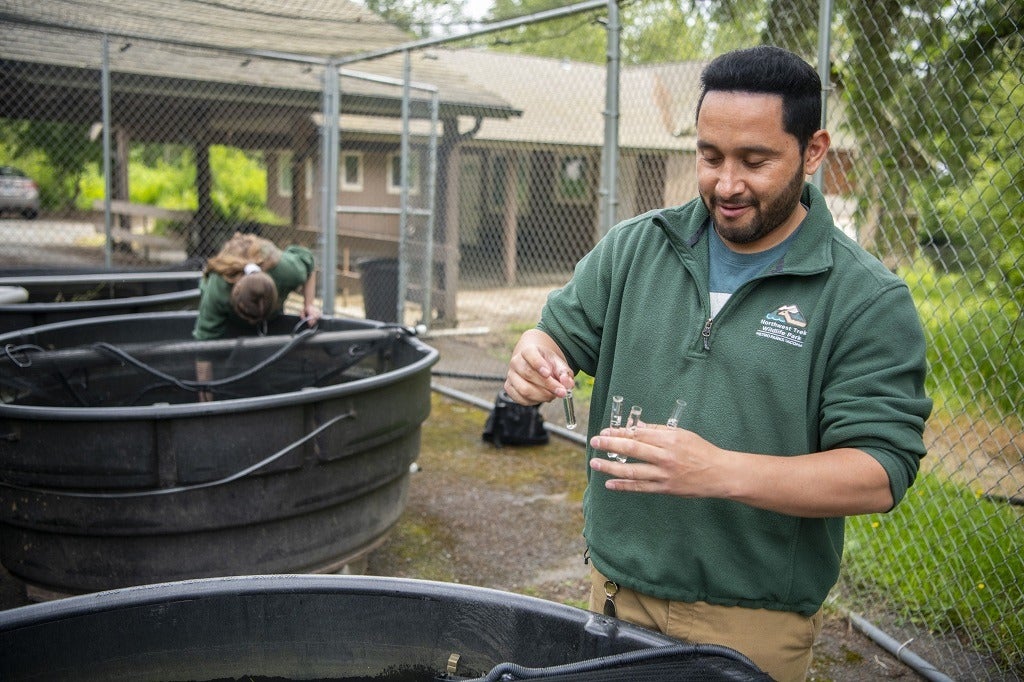 Q: What is your favorite animal at Northwest Trek?

Hannah: The foxes! My first day interning at Northwest Trek, I helped scatter-feed the foxes with one of the keepers and I will never forget that experience. It was so cool to be in close proximity to such a beautiful and wild animal and to care for them.

I’ve also discovered more of an appreciation for frogs! Growing up, I was always catching frogs and was fascinated by them, but having the opportunity to raise them and learn about them every day has been really exciting. It’s almost like I’ve been preparing for this job my whole life, just not on the professional level I do it now.

Armando: The beavers! I love watching documentaries on wildlife around  the world. One day, I watched a documentary about beavers and was inspired by how a small animal can make such a big difference in the ecosystem. Growing up in Mexico, I’d never seen a beaver before coming to Northwest Trek. When I first met the beavers, I fed them and immediately made a connection with them. 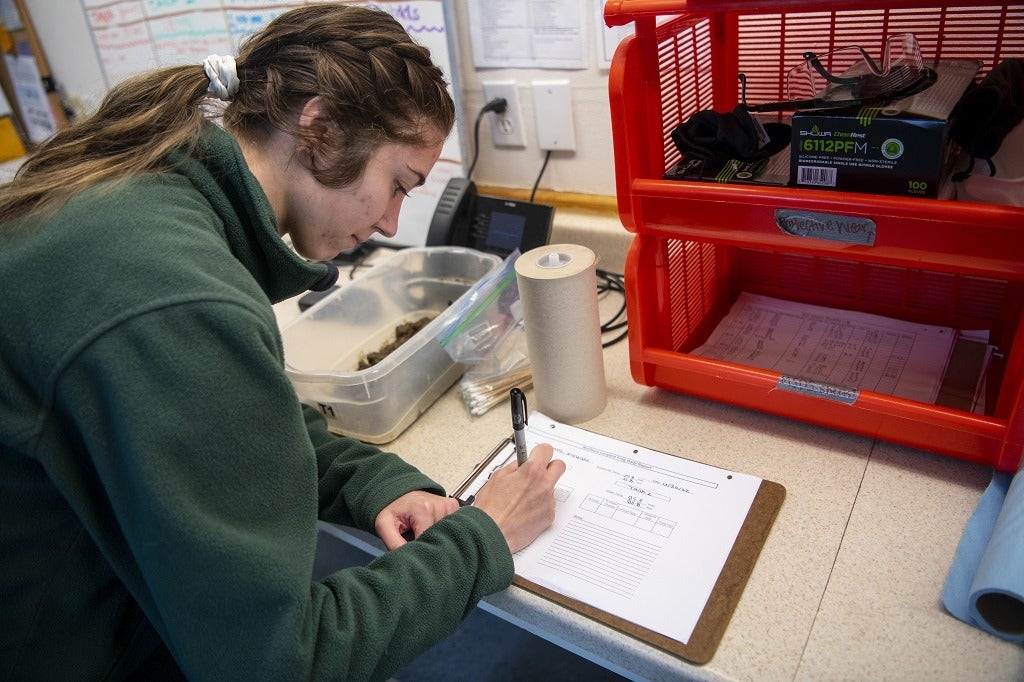 Q: What was your journey to becoming a keeper? What inspired you to become a keeper?

Hannah: Growing up, I had a love for animals early on and always preferred animals over people. I earned my bachelor’s degree in biology at Seattle Pacific University and minored in psychology, with a focus on animal behavior. I worked at a doggy daycare after college, but knew I wanted to get into more of the caretaking side. I started as an intern at Northwest Trek in December 2021 and was offered a part-time keeper position in May. I love working with animals native to the Northwest and making a difference in their lives.

Armando: I grew up in Mexico and was a licensed veterinarian there. In 2013, I was given a second chance at life and immigrated to the United States with my family. My license didn’t transfer to the United States, so  I needed to start over. I earned my bachelor’s degree in wildlife ecology from Washington State University. I started as an intern at Northwest Trek and then was hired as a part-time keeper. I’ve discovered that I enjoy caring for and protecting animals much more than doing the veterinary side of things.

I really want to inspire and educate immigrants to have a better understanding of the native wildlife here and encourage them to take part in conservation in their local communities. 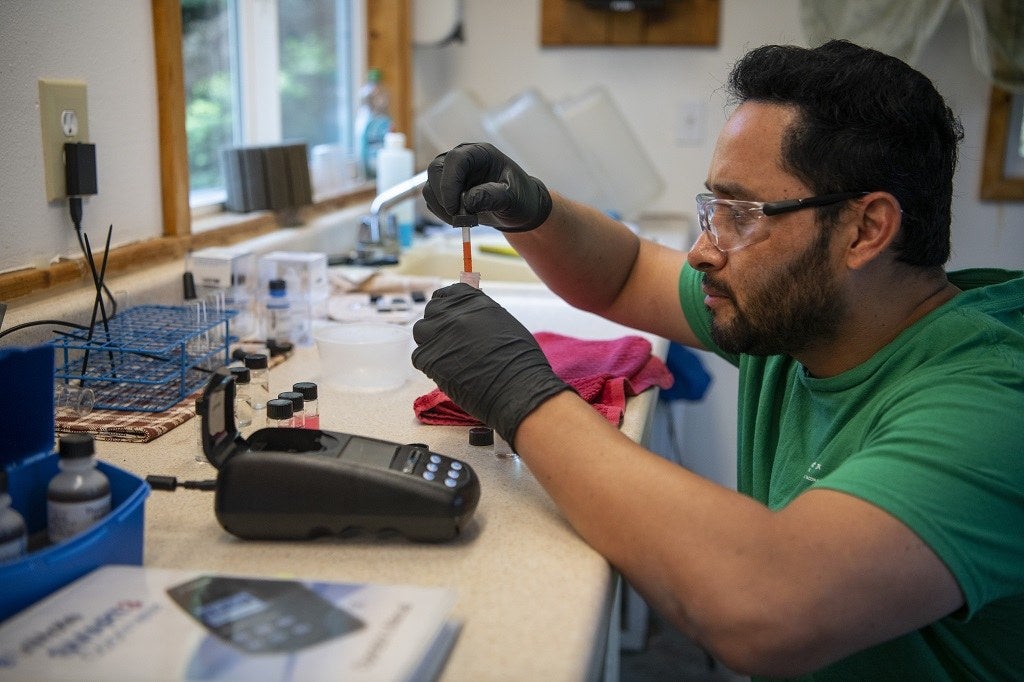 Hannah and Armando: Our typical day begins by checking the welfare of the frogs. We watch their behavior and make sure they are bright, alert, and responsive. Then we clean their tanks and take water quality samples. We also feed them once a day. We’re constantly assessing and monitoring their situation. We want them to grow big and healthy, so they have the best chance of survival in the wild when they are re-released. 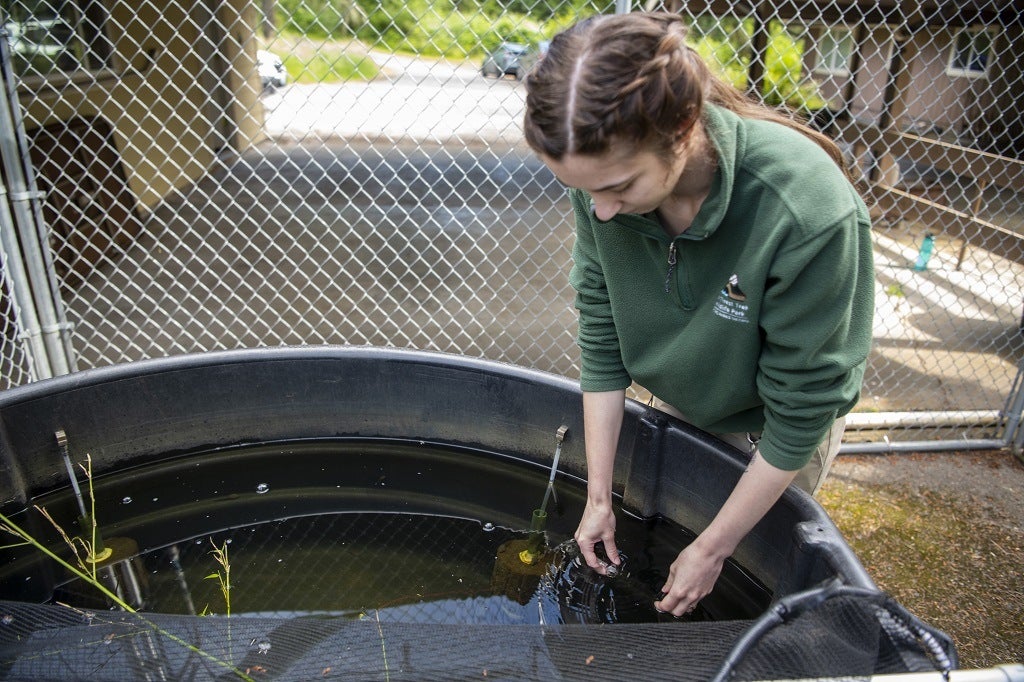 Q: What is something people wouldn’t expect about your job?

Hannah: I don’t think a lot of people realize how sensitive animals are to the environmental conditions around them. We do everything we can to mimic their environment as closely as possible to what it would be in the wild.

Armando: We do so much data! I’ve discovered I really enjoy it, too. We record everything for water quality, and we also continually measure the growth of the frogs.  All that information is collected and recorded so we can assess the care and welfare of the animals. 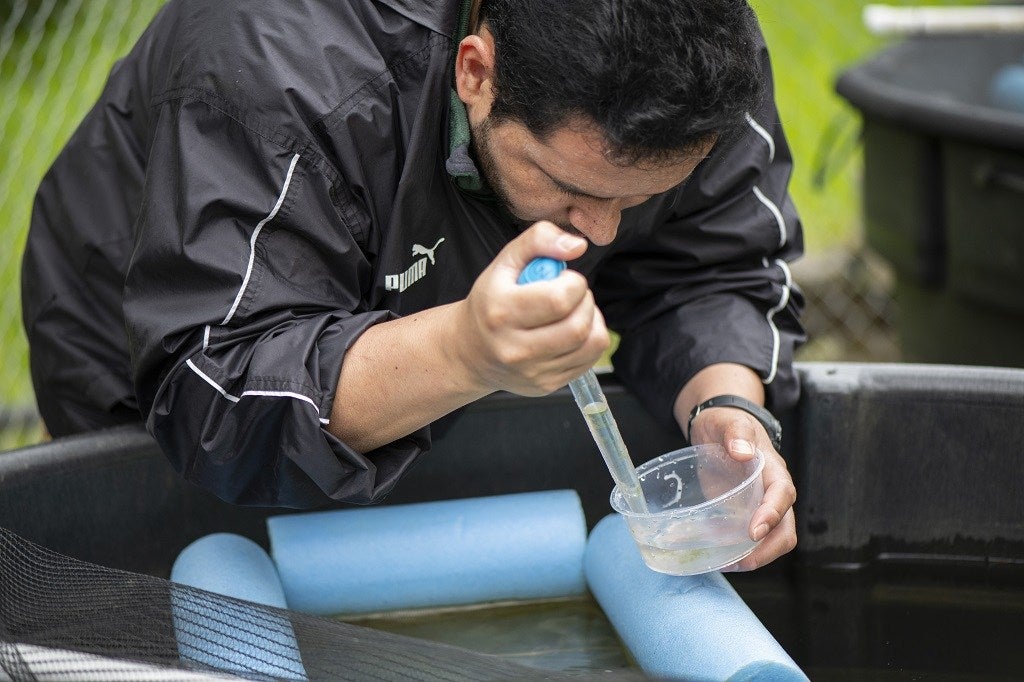 Q: What advice would you give someone who wants to be a zookeeper?

Hannah: Never give up! If you’re truly passionate about working with animals, persevere and push through. Zookeeping doesn’t pay incredibly well, but if you have the love for the job, then it is well worth it.

Armando: My advice would be for the parents: engage your children in nature and help them feel comfortable exploring the wildlife around them. Teach them that caring for wildlife is important. And if they discover they want to become a zookeeper, then support them in their dreams. 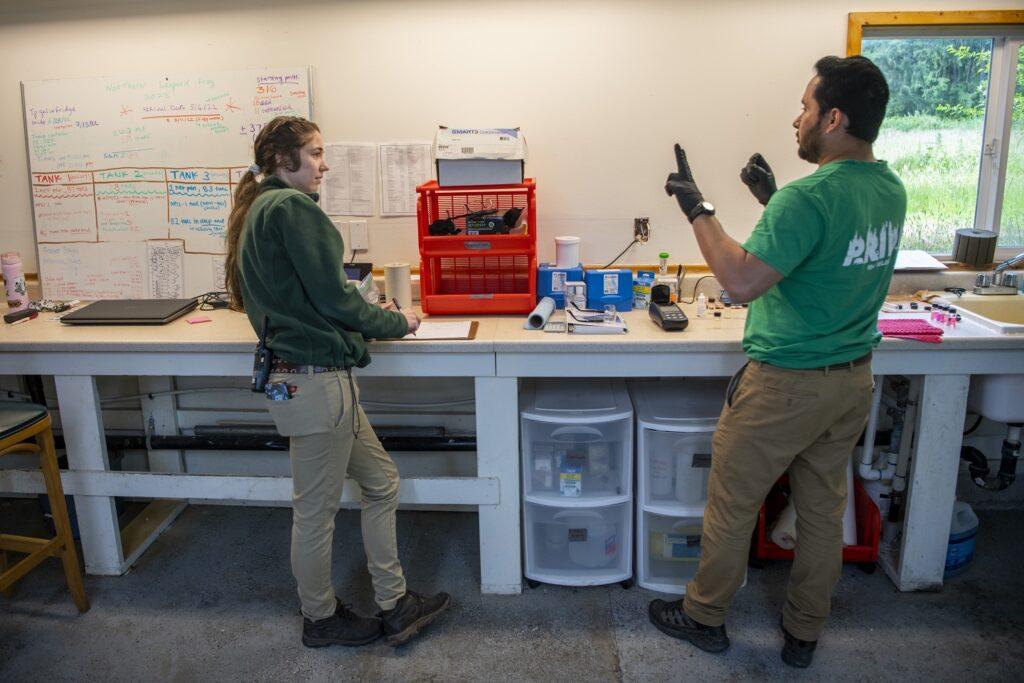