As the daylight returns in February, do you get the urge to start cleaning out the cobwebs, tossing the junk and scrubbing the house?

Emily Santiago does – but it’s a rather unusual kind of housekeeping. Because the lead naturalist at Northwest Trek Wildlife Park has spent hours this winter sprucing up the parks’ Mason bee “hotel”, a process of cleaning tunnels, sorting cocoons and removing predators that ensures our native pollinator bees have the best chance of a healthy, productive spring.

“We’ve done this every year since we got our Mason bees,” says Santiago, as she sets up her equipment. “You don’t have to clean bee houses, but it really helps protect your bees from mold, mites and wasps, and gives them a better chance in the spring. Since they are one of the few pollinators that early in the season, we really rely on them as humans.”

The first step is disassembling the “bee hotel.” Like many Mason bee keepers, staff at Northwest Trek built accommodations that can easily be separated and put back together, just for this purpose. Female Mason bees lay their eggs in narrow tunnels, depositing a store of pollen as food for the larvae, and separated by wads of mud (building like masons, hence their name).

In the wild, these tunnels might be tiny openings in tree trunks made by woodpeckers, or in fallen branches or bark.

Much more accessible to humans, though, is a construction of small wooden tiles that have been drilled with ¼-inch holes. Each tile fits onto the next like LEGO to create tunnels, and the stack can be bound together and popped into a dry space near to the early-flowering native plants that supply the bees’ food.

After laying eggs, adult bees die, and the larvae metamorphose inside their cocoons, waiting for warmer weather.

“You can see evidence of pollen mites – they leave little granules behind,” she points out. “And mold looks like a fluffy fungus.”

The other more tragic thing she sees is ravaged cocoons. Tiny gnat-sized predator wasps love to come inside the cozy bee home and lay their own eggs. As the wasp larvae hatch, they eat the bees who are now grown into adults inside their cocoons. The wasp larvae then pupate inside the dead bee, emerging to lay more eggs in more bee cocoons. At a casual glance, they look exactly like the original homeowners.

And that’s the second, most important task Santiago has. In January she retrieves the cocoons from where they’ve been stored in a cold, dry spot. Scattering the tiny brown lumps onto a clear tray, she begins an ancient process called “candling” – holding a light underneath cocoons or eggs to see what’s inside. (It can also be done with bigger eggs, such as birds.)

These days, you don’t use candles. Instead, Santiago sets her tray over a bright flat light outdoors, and starts examining each cocoon, prodding gently with fine tweezers to test the structure.

“You can tell right away if they’re crunchy or smooshed that they’re not viable,” she explains, picking up a shriveled cocoon and setting it aside. “Like this one.”

She’s also looking inside each translucent healthy cocoon to see what’s inside. What she should find: A tiny adult bee, sleeping.

Instead, the second one she sees is an actual insect that emerges right away. It looks like a fly – but then so do Mason bees (they’re small and black, unlike their honey or bumble bee cousins).

“Hmmm,” says Santiago, picking up the insect with delicate fingers. “What are you? Ah – you only have two wings, so you’re definitely not a Mason bee. They have four wings.”

It’s a relief, because any bee that emerged this early in the winter would starve, with no food flowers anywhere around.

The next cocoon holds a tiny adult bee shape – “See the legs?” points our Santiago – but the one after that has an ominous dark curve inside: a larva.

“See that?” says Santiago. “That’s a wasp. We know, because they metamorphose later than the bees.”

She scoops up the baby predator and sets it aside with the dud cocoons. Later, after identifying the wasp species, she’ll squash them all to make sure no predator wasps emerge to hunt down fledgling Mason bees. Other bee-threats include chalkbrood disease, caused by a fungus: When bee larvae ingest the spores, they’re killed, leaving behind a mummified larval cadaver which, in true horror-movie style, can spread more spores throughout the bee box.

It’s a bug-eat-bug world out there, but concerned humans can make life a little more secure for these all-important pollinators.

“In earlier times, Mason bees would just have laid eggs in the wild and done just fine,” Santiago says. “But now there are so many threats they didn’t have before: pesticides, herbicides, loss of habitat. We are dependent on bees for about 35% of our food, so protecting them is really important.”

If you don’t keep Mason bees, you can still help them by planting native plants (especially early-flowering ones), avoiding pesticides and herbicides in your yard, and leaving a certain amount of old wood and debris for wildlife habitat. Find more information about pollinator gardening here.

In total, Northwest Trek’s Mason bee hotel – which is located near the picnic pavilion, complete with its own rooftop bee food garden – produces a few thousand cocoons, and more every year. It takes Santiago several hours to clean and sort them all, a job that’s tedious but fascinating, and perfect (in non-Covid-19 times) for volunteers.

“I used to keep honeybees, and Mason bees are so much easier – no equipment, no stings!” Santiago laughs.

When all the cocoons are sorted, she’ll store them in recycled plastic drink bottles, poked with several bee-sized holes at the end (to protect from hungry mice). The bottles will rest neatly alongside the cleaned, stacked and bound tunnel tiles inside the bee hotel, and when the temperature’s right – hitting 55 degrees several days in a row – Northwest Trek’s Mason bees will emerge for the season, ready to eat, mate, pollinate and start a new generation of bees in their hotel.

Santiago will be out there daily, checking on her protḗgḗs. 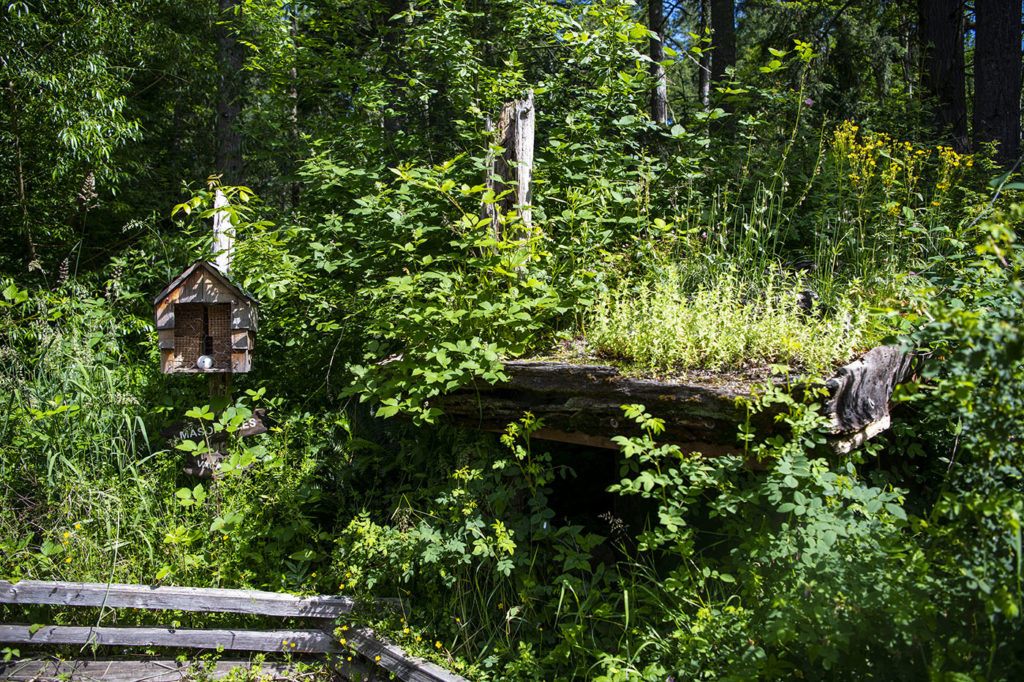