Looking Deep Inside a Bobcat

For most of us, throwing up isn’t a good thing. Happening repeatedly, it’s a sign you should probably investigate – which was the case for Tahoma, a bobcat that arrived last year at Northwest Trek Wildlife Park. Otherwise in good health, he’d been regurgitating a bit more frequently than is usual in big cats, and so head veterinarian Dr. Allison Case – not seeing anything on her x-rays – had scheduled a gastroscopy for him with the park’s partner Summit Veterinary Referral Center to see if anything deeper was wrong.

“So he’s been vomiting?” asked veterinary endoscopy specialist Dr. Kelly McCord, after Tahoma had been anesthetized and gently transferred from crate to exam table.

Lying peacefully on the table, Tahoma was quite a presence. With pointy black ears, soft round paws and thick speckled fur, he’s a big guy – almost the size of a lynx at 35 pounds. Before he came to Northwest Trek he’d been owned privately as a pet. That’s illegal in Washington State, and Tahoma was confiscated before finding a new home at the wildlife park.

“He could stand to lose some weight,” observed Dr. Case, checking his abdomen.

“Yes, we’re working on an exercise program for him,” said keeper Haley Withers with a smile, as radiologist Dr. Krystina Stadler took an ultrasound to check for abnormalities.

Then Dr. McCord was slipping the thin endoscopy camera down Tahoma’s esophagus and staring intently at the screen showing the cat’s glistening pink insides.

“His stomach is normal,” said Dr. McCord. “There’s a lot of food in there. Does he eat fur?”

“He eats whatever he can catch – rabbit, squirrels,” said Withers. “Plus his normal diet of mice, chicken and meat.”

Dr. McCord snaked the endoscope into Tahoma’s small intestine, pulling out tiny biopsy samples to send to the lab for analysis.

“I’m seeing quite a lot of irritation,” he said, gazing at the screen. “See that cobblestone texture? And how friable that tissue is? There are several small superficial ulcers. How was his journey when he came to the park?”

“I’ll just check for a hiatal hernia,” said Dr. McCord. “Can you press on his sternum towards his chest?”

“No, I don’t see one,” Dr. McCord confirmed. “And the esophagus looks good.”

Handsome, with a nail trim

In the doorway, Summit vets and technicians paused as they passed by, gazing at the magnificent bobcat breathing peacefully.

“He’s so handsome!” came the admiring comments. “Does he love you guys, being used to people?”

As the team finished up the gastroscopy and took urine and blood samples, Withers began another essential part of Tahoma’s vet visit – a nail trim. He and fellow Northwest Trek bobcat Tanner were about to be introduced, and shortening claws was a vital step in establishing good relations.

“This exam was definitely a good call,” said Dr. Case. “We’ll send those biopsies to Colorado State University for histopathology.”

“The most common thing we see in cats is inflammatory bowel disease,” explained Dr. McCord, who regularly performs endoscopies on domestic animals but has also seen other Northwest Trek animals, like gray wolves.

“There are different types but it’s often a reaction to the protein in their diet. But about fifty per cent of all domestic cats with chronic GI tract signs turn out to have small cell lymphoma. It’s usually responsive to treatment, if caught in time.” 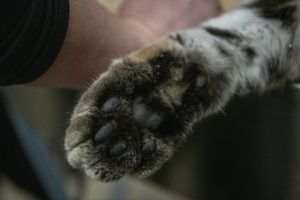 Finally, everything was done. After giving Summit staff one last admiring look, Cramer and Withers gently scooped Tahoma up and laid him back into his crate. Dr. Case administered drugs to reverse his anesthesia and watched carefully, one hand ready to remove the endotracheal tube that had been keeping his airways open while he recovered.

Finally, Tahoma began to stir, and after locking the crate, the Northwest Trek team carried him carefully into the back of the transport van. A triangle tip of nose showed at the window, curious.

Great news! Tahoma’s biopsy results confirmed that he had absolutely no cancer in any form. Instead, his diagnosis was pancreatic insufficiency: Tahoma’s pancreas isn’t doing its usual job of production and secretion of enzymes to digest his diet. That also explained the regurgitation.

Interestingly, Nuka – one of Northwest Trek’s lynxes – has exactly the same condition, and it’s easily treated by sprinkling an enzyme powder onto the cat’s meat diet to help digestion.

“This is very good news about Tahoma’s biopsy results, and very interesting,” comments Dr. Case. “It’s rare to have two animals with this condition at the one zoo. We’ll also supplement Tahoma’s diet with folic acid for 30 days. I feel so lucky that we have an expert team here reporting signs and symptoms, that I can evaluate, and that we partner with veterinary specialists to diagnose when necessary, to give the best care for our animals.”

Previous Article
Next Article
labels:
You Might Also Like
New Bobcat in Town!
There’s a new cat in town! Northwest Trek is now home to Tahoma, a 4-year-old male bobcat. Tahoma was raised as a pet until recently. Bobcats are illegal to own as pets in Washington State, and his owner was forced to surrender him. Tahoma joins the wildlife park’s resident male bobcat, 8-year-old Tanner, who was also raised by humans before coming to Northwest Trek. Because of the cats’ comfortability around people, they both are not able to be released back into the wild. “Bobcats are wild animals, and wild animals don’t make good pets. It takes generations of careful breeding …
Learn More
Making holiday gifts for animals
With under two weeks until Christmas, staff at Northwest Trek Wildlife Park are as busy as Santa’s elves creating unique holiday gifts for the animals. The weekend after Christmas, Dec. 28 and Dec. 29, is “Winter Wildland” at Northwest Trek. At the annual event, animals will be given their holiday-themed treats and gifts, known as “enrichments.” Enrichments are created to challenge animals’ brains and bodies, providing them with the environmental stimuli necessary for their well-being. “During Winter Wildland, our keepers create festive themed enrichments that are made from materials that our animals do not have the chance to interact with …
Learn More
See All Articles