It’s one of the most festive events of the year — Pumpkin Chomp & Stomp at Northwest Trek. Guests can see Halloween decorations throughout the wildlife park, take a Haunted Hike, and watch animals play with PLENTY of pumpkins.

The horticulture team at Northwest Trek grows many of the pumpkins. This year, they produced about 30 pumpkins and 400 various hybrid gourds.

“Every year, we give pumpkins to our animals as part of the Pumpkin Chomp & Stomp event,” horticulturist Jake explained. “But a few years ago, I noticed that some of the carving pumpkins weren’t very nutritious.”

In 2018, Jake researched pumpkin and squash varieties on the U.S. Department of Agriculture website, picking those with plenty of nutrients and sugar for taste. He elicited the help of elementary students at Weyerhaeuser Elementary in Eatonville and teen volunteers from the Bush School in Seattle to plant the seeds and prep a pumpkin patch.

“There were about 150 pumpkins just that first year!” said Jake. 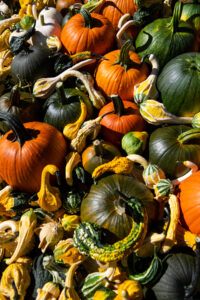 In the years since, pumpkins and gourds have seeded themselves from the compost, once again providing no-cost nourishment and enjoyment to many animals.

“We simply weeded the pumpkin garden bed once, fertilized it with organic material, set up sprinklers on timers, and watched the pumpkins grow,” explained Jake.

“It was a community effort that continues to bring enrichment and nutrition to our animals yearly,” said Jake.

Many animals, including grizzly bears, gray wolves, and river otters, will enjoy the pumpkins this year.

Previous Article
Next Article
labels:
You Might Also Like
Creating Hoot ‘n’ Howl
There are people who decorate for Halloween. There are people who recreate a haunted house. And then there’s Hoot ‘n’ Howl: an entire wildlife park full of spooky decorations, lights, glowing pumpkins, games, and treats. The annual Northwest Trek fall event (this year 5-9pm Oct. 14-15 and 21-22) takes weeks of preparation from almost every single staff member: zookeepers, naturalists, admissions staff, maintenance crew and more. But it’s worth every minute. Pumpkins and Prep “It’s a lot of work, but it’s so much fun,” says Jessica, the naturalist leading the event. On a Thursday afternoon one week before Hoot ‘n’ …
Learn More
A WEEK OF WILD WINTER FUN
Just in time to burn off some of that winter break energy, Northwest Trek Wildlife Park is opening daily for a week at the end of December (Dec. 26-Jan. 2) for the return of “Winter Wildland.” Guests to the wildlife park are invited to watch in delight as animals play with holiday-themed treats and enrichments. Guests can walk the paved pathways laced with winter magic and decorations and see native Northwest animals like bald eagles, grizzly bears, gray wolves and river otters. For weeks, Northwest Trek staff have been busy as Santa’s elves, making festive cardboard cutouts and wrapped gifts, …
Learn More
Toss the tusk, help protect wildlife
Wildlife products now illegal to sell in Washington can be dropped off at Oct. 26 event. FOR IMMEDIATE RELEASE: Sept. 25, 2019 TACOMA, Wash. – Have any ivory carvings tucked away at home? A shark fin souvenir? Grandma’s antique turtle-shell brooch? Thanks to the passing of the Washington Animal Trafficking Act – I-1401 – those wildlife products are now illegal to sell in Washington state without proper documentation, in order to protect endangered species from poaching. Yet there may be many South Sounders who still own such products, through inheritance or prior sale. What to do with those items? Hand …
Learn More
See All Articles