Fat Bear Week, October 5-October 11, is a celebration of success and survival, where brown bears in the Katmai National Park and Preserve in Alaska are matched against each other in a “march madness” style online voting competition to see who is crowned the Fat Bear Week Champion of 2022. No, it’s not fat shaming- it’s highlighting the resilience and adaptability of brown bears. Fat Bear Tuesday (Oct. 11) is when the winner is announced.

While the grizzly bears at Northwest Trek Wildlife Park aren’t in the competition, we think they’re worth celebrating too.

Huckleberry and Hawthorne, both 4 years old, still have around another 200 lbs. before they reach full maturity, and keepers say they are growing steadily each fall.

“We feed the bears a balanced diet of produce, salmon, elk and bear chow,” said Carly. “Combined, the pair eats 65 lbs. of food per day!”

The more weight gained during the fall, the better, especially for wild bears. Bears rely on their stored fat to get them through the winter. 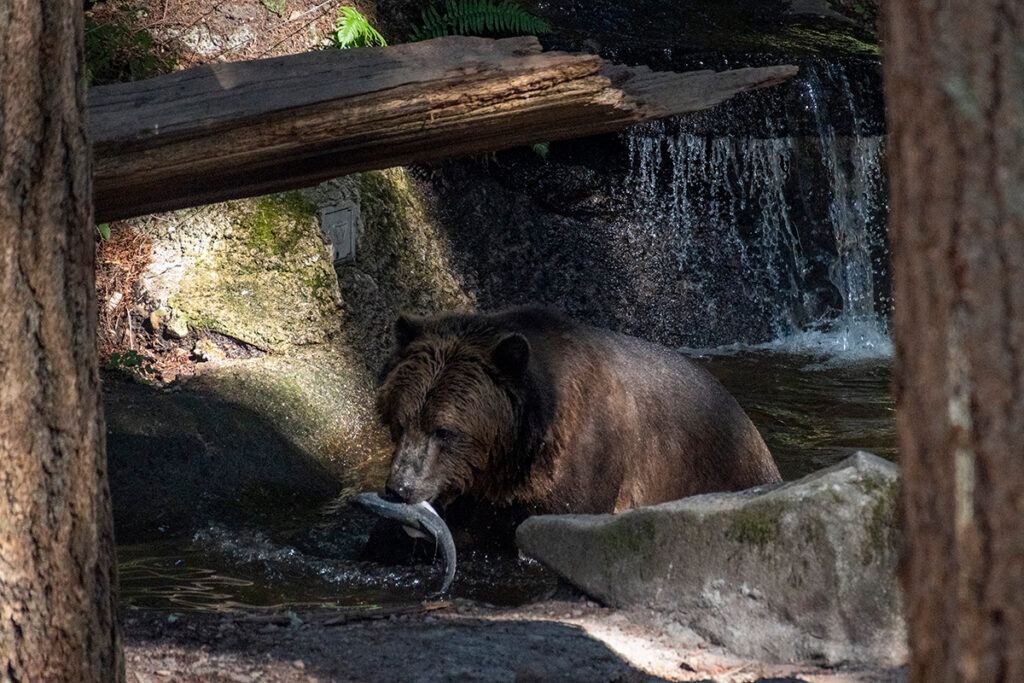 “Even though our bears are in human care, it’s their natural instinct to go into a type of hibernation called torpor,” said Carly.

But, because of their young age, the bears don’t have enough fat stores needed to get them through a winter without food.

“As fall winds down, they tend to slow down and we change the type and amount of food they receive to better match what they’d be eating in the wild,” said Carly.

The grizzlies are already starting to slow down and have begun to dig a den in their habitat that is large enough to fit both bears if needed.

“They haven’t spent much time in it yet, so I expect they may use their man-made dens behind the scenes more again this winter.”

Those dens are heated with straw bedding, so who could blame them!

If you find yourself at Northwest Trek in October or November, keep an eye out for the grizzlies before they enter torpor. Hint: they’ll be the boys eating LOTS of food, rightfully so.