They’re the names chosen for our energetic, engaging cubs, who are ready to make their public debut on Thursday, Sept. 20. The two will be out in their forested habitat – one at a time – beginning at 9:30 a.m.

A bit of patience might be needed, though: The active, playful cubs run hard and explore every corner of their forested habitat. All that exercise makes for a pooped – and hungry – bear. (Remember, they’re much like human toddlers, bear keeper Angela Gibson says.) They expend a lot of energy exercising all those muscles and exploring. So who could blame a cub for needing to take a break, get some chow and settle in for a nap from time to time? If they aren’t visible, they’ve likely decided it’s time to rest.

The names Hawthorne and  Huckleberry were chosen by members of the public for the two orphaned cubs, who arrived at the wildlife park near Eatonville last month from Montana and Alaska.

More than 2,100 people voted for the cubs’ names in an online survey. Northwest Trek staff members supplied three choices for each cub: Bandera, Glacier or Huckleberry for the Montana cub; Hawthorne, Kenai or Sitka for the Alaska cub. The names are in keeping with the wildlife park’s recent tradition of naming animals for geographic features, regions, towns, cities or trees, plants and flowers of the Northwest.

Now, after some seven weeks of settling in and getting to know their keepers, the two 9-month-old cubs are ready for prime time.

And, of course, now people will know what to call them, too.

“These are the first grizzly bear cubs at Northwest Trek in the wildlife park’s 43-year history, and we are delighted that so many of our guests and social media fans took the time to think about and vote on fitting names for them,” said Metro Parks Tacoma Commissioner Erik Hanberg.

The Tacoma community played a huge role in bringing the bears to Northwest Trek, too, he pointed out.

The bulk of the nearly $600,000 cost for completely renovating the quarter-century-old grizzly bear exhibit was paid for with bonds approved by Tacoma voters in 2014 to build and upgrade facilities across Metro Parks Tacoma, which owns and operates Northwest Trek.

When it came to choosing the cubs’ names, the vote was not close. Huckleberry, the name for a small plant that bears blue, red or black berries, garnered 80 percent of the vote. Wild huckleberries are a staple of grizzly bears’ diets in the wild. Glacier and Bandera came in second and third, respectively.

Hawthorne, derived from the name for a diverse group of thorny shrubs and trees that are native to the Northwest, received 60 percent of the votes cast. Kenai and Sitka ran second and third.

“Although we feel that Huckleberry and Hawthorne are ready to roam their forested exhibit and make their debut for the public, the hours they’re viewable will be limited at first,” said Northwest Trek Zoological Curator Marc Heinzman. 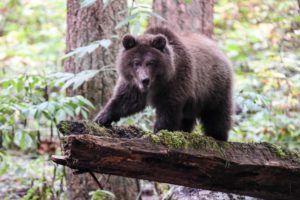 “Like human toddlers, these cubs will run hard and play hard, then be ready for lunch and a nap,” bear keeper Angela Gibson said. “They’re highly energetic, leaping logs and exploring every corner of their habitat.

“They eat several times a day,” she added. “It takes a significant amount of nutritious food to fuel their growing bodies and curious nature.”

Based on the cubs’ behavioral cues, Northwest Trek’s animal-care staff will decide when they’re ready to share the same habitat space. We’ll post updates on the blog and our social media channels so you’ll know the best times to come and see them.

Northwest Trek has been home to grizzly bears since 1993 and actively works on behalf of grizzly bear conservation issues with a number of public and private agencies and groups.