Bears Go Down for Winter Naps

The black bears at Northwest Trek have gone down for their winter naps, also known as torpor. During torpor, a bear’s body temperature, respiratory rate and metabolic rates all decrease to conserve energy. The bears can maintain this low energy sleeping state for days, weeks or even months without having much activity outside of their den, including eating and going to the bathroom.

“Benton and Fern do have periods of activity during the winter months, where they will eat, go to the bathroom, and collect more bedding to remake their winter ‘beds’,” said keeper Haley.

Can you keep them awake?

Scientists describe torpor as an involuntary state, meaning naturally, the bears will experience some level of sleepiness. At zoos in warmer climates, where seasons don’t drastically change, bears will often have a shorter amount of time in torpor.

“We have four very different seasons at Northwest Trek,” said Haley. “We want to support the bears in what comes naturally to them. We make sure the bears have exceptionally quiet surroundings this time of year so they can sleep as long as they like.”

Haley says she and other keepers also feed the bears a seasonally appropriate diet leading up to torpor, for them to acclimate to the change in seasons as they would in the wild.

Can you spot them?

Benton and Fern have two options for sleeping at Northwest Trek. They each have man-made dens behind-the-scenes, where they are offered food daily (although, they don’t always wake up for it). The dens have heated floors and giant straw beds for them to get cozy in.

The bears also have a hibernation den near the center of the public exhibit. Guests can try to see if they can spot either bear napping there. Benton and Fern put a lot of work into preparing that den for winter each year, using ferns, fir boughs and grasses as bedding.

“The den is a hole, five-feet in diameter, with an opening just large enough to accommodate the bears’ body size,” said Haley.  “The den is meant to be pretty snug, in order for them to keep heat inside.”

Once comfortably inside, the bears will pull down even more vegetation toward the opening to keep it warm and dry. The den only fits one bear, and Benton and Fern will only trade places a few times throughout the four or five months of torpor.

What about the grizzlies?

Grizzly bears Huckleberry and Hawthorne, now four years old, have not gone into a full torpor since they arrived at Northwest Trek as cubs.

“We think that’s because of their young age,” said Haley. “They are still growing and learning how and where to create successful denning sites in their habitat.”

Even so, Haley said she does expect them to slow down significantly this winter, but doesn’t expect them to go into a complete torpor like the black bears. 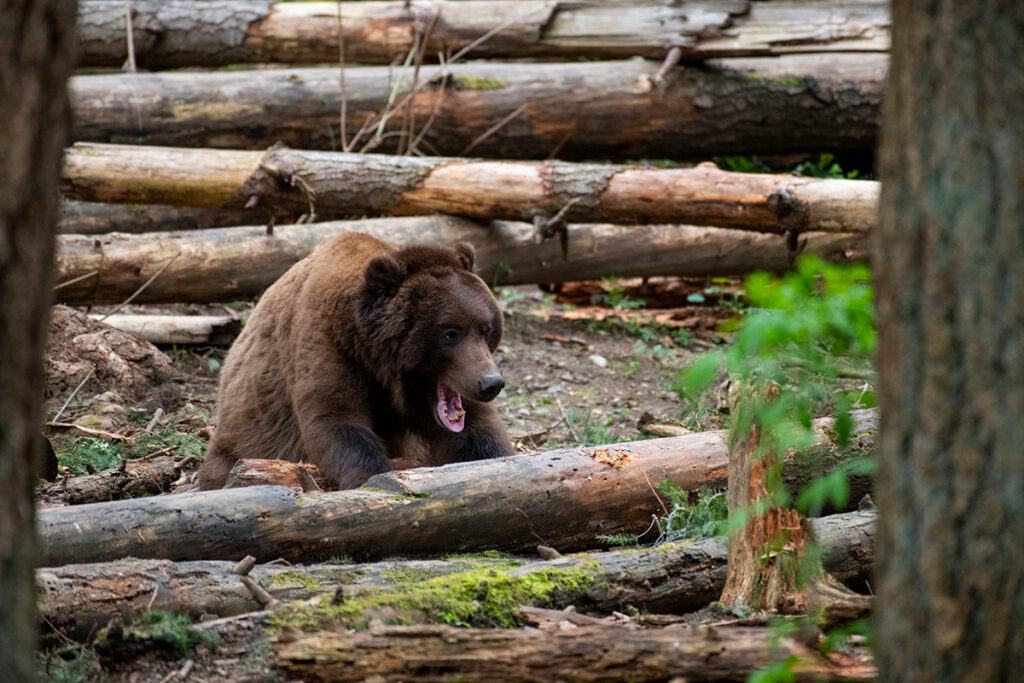 Huckleberry and Hawthorne will have access to both their man-made dens complete with heated floors and fluffy bedding as well as their habitat.

“We’ve seen them digging a lot at the top of their habitat, and sleeping in the afternoon,” said Haley.

She’s also noticed them slowing down their food consumption, even often having leftovers.