Eatonville, Wash. – Ten fluffy white mountain goat kids paused halfway up a log behind the scenes this week at Northwest Trek Wildlife Park. Then, as one, they scampered outside to explore. 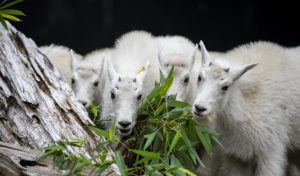 The kids were making history in two ways: They were the largest group of mountain goats the Eatonville wildlife park has ever cared for. But more importantly, the kids represented another successful collaboration by Northwest Trek, regional zoos and government agencies to relocate mountain goats out of the Olympic mountains, where they are non-native, and restore depleted populations in their native Cascade range.

Over several weeks in August, staff from the National Park Service, the Washington Department of Fish and Wildlife, and the USDA Forest Service, together with staff from Northwest Trek and Oregon Zoo, worked together to capture goats from the Olympic National Park and Forest. Immobilized by a helicopter crew, the mountain goats were then carried through the air in specially-made slings to staging areas at Hurricane Ridge and Hamma Hamma.

There, Northwest Trek veterinarian Dr. Allison Case and veterinary technician Tracy Cramer, along with veterinary teams from the agencies and Oregon Zoo, gave each goat a thorough check-up, including measurements, weights, samples and any needed vitamins or medications.

During this summer’s collaboration, 177 goats were successfully moved to different locations in the Cascades. Since September 2018, a total of 275 mountain goats have been translocated, with five kids given a home at Northwest Trek last year.

But 10 mountain goat kids were carefully transported by keepers Ed Cleveland and Dave Meadows to Northwest Trek for stabilization, acclimation and socialization, living behind the scenes. 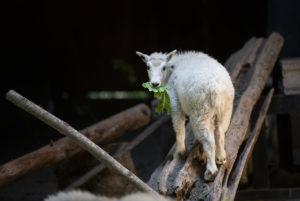 “They move as a unit, like one organism,” said Case, who spent 10 days in total on the mountain, examining goats and lending her hands-on animal care expertise to the teams of wildlife veterinarians and biologists from multiple agencies and tribes who all came together to work on the project. “So staying with each other during this transition was essential for their well-being. They’re really settling in well, and are in good health.”

When the first kid arrived at Northwest Trek, Case had already arranged for two of last year’s goat kids, now one year old, to meet them. This helped the newcomers settle down quickly, said Case, who kept a close medical eye on all the new kids. Keepers also built a barn and yard full of goat “furniture” – logs, stumps, platforms and even a playhouse for the young animals to climb on and jump into.

They are given a veritable banquet of food choices, from hay and alfalfa to fresh-cut browse such as willow, bigleaf maple and alder. They even get occasional chopped apple treats.

One kid – a female – will join the other goats in the wildlife park’s 435-acre Free-Roaming Area. The other nine will soon move to new homes at regional zoos: one to Woodland Park Zoo; two each to Oregon Zoo and Wildwood Zoo, Wis.; three to Hemker Zoo, Minn. and one more zoo yet to be confirmed.

“We are honored to be a part of this important effort,” said Amy Cutting, who oversees the Great Northwest animal area at the Oregon Zoo. “Dr. Case and the Northwest Trek team have done a fantastic job supporting our NPS and WDFW colleagues in making this huge relocation effort a success. I am really proud of the zoo community for stepping up to give these kids great homes. The Oregon Zoo has contributed significant financial and staff resources to the effort, and will be taking in two of the relocated kids, but this entire effort would not have been possible without the Herculean efforts of the Northwest Trek team.”

“We’re pleased we can provide a permanent home at Woodland Park Zoo for a new kid goat. The female will join our one-year-old male, who was part of last year’s translocation, and an adult female. We’re confident she will successfully socialize with her new herd and will enjoy living in the high rocky crags and ledges of our Northern Trail habitat,” said Martin Ramirez, mammal curator at Woodland Park Zoo, who supplied a veterinary team for the 2018 translocation period.

Another two-week capture and translocation period is planned for summer 2020. More information about the project and conservation plan can be found at wdfw.wa.gov.

“An operation such as this is impossible without the support and participation of a large team,” said Dr. Rich Harris, a WDFW wildlife manager who specializes in mountain goats. “All have worked tirelessly to give every goat the best possible chance at a new beginning in native habitat. In future years, we hope to be able to look back with the satisfaction of knowing we helped restore this wonderful species where there are currently so few.”

Right now, however, the 10 goat kids roaming their barn and yard at Northwest Trek are also, simply, the largest group of mountain goats the wildlife park has cared for at one time. With 40 little legs, 10 pairs of bright eyes and 10 inquisitive black noses, they’re truly a sight to see.

“That’s a whole new generation of mountain goats, right there,” said Northwest Trek Zoological Curator Marc Heinzman. “We’re pleased we can offer our skills and experience to care for them.”

Northwest Trek, accredited by the Association of Zoos & Aquariums, is a 725-acre zoological park dedicated to conservation, education and recreation by displaying, interpreting and researching native Northwest wildlife and their natural habitats. The wildlife park is a facility of Metro Parks Tacoma and is located 35 miles southeast of Tacoma off State Highway 161.

Previous Article
Next Article
labels:
You Might Also Like
Ellinor joins the herd
She’s named after a mountain, but she’s the smallest of the herd. As her human care team watched closely, little mountain goat Ellinor – one of ten kids cared for at the wildlife park after recent mountain goat relocation efforts in the Olympic Mountains – trotted out to the Free-Roaming Area Wednesday morning to meet the rest of the Northwest Trek herd. There to meet her were the five yearling goat kids who’d found a home here after last year’s relocation project, and an older nanny. And while there was some initial surprise all round, it was soon clear that …
Learn More
Exam time for goat kids
Examining three mountain goat kids in a row? That’s all in a day’s work for a wildlife park that’s looking after 10 goat kids until they go to their new homes. “All right,” said Dr. Allison Case, Northwest Trek veterinarian, checking off her notes. “We’ve done weight, we’ve done blood samples, fecal samples, dewormer, fly spray, vaccinations, hoof trim, antibiotic. We just have the rest of the physical and we’re done.” The goat kid with the yellow ear tag sleeping peacefully under anesthetic was just the first of three to have exams that day in the Northwest Trek veterinary clinic, …
Learn More
See All Articles