And now, there are two

Blog Home
And now, there are two

We welcomed a second orphaned grizzly bear cub to Northwest Trek Wildlife Park over the weekend. 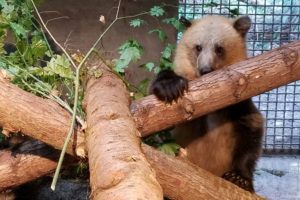 He arrived from Montana, where he was rescued on the Blackfeet Nation lands after his mother was legally killed. She had been attacking pigs on a farm, wildlife officials said.

Staff at Montana Wild, where he was cared for since the end of June, estimate him to be a yearling cub, born in the winter of 2017.

He joins a 6-month-old cub from Alaska in our recently renovated grizzly bear habitat. That cub flew in last week from Anchorage. He was rescued near Nome last spring after his still-nursing mother was killed by poachers.

This is the first time in Northwest Trek’s 43-year history that the wildlife park is home to two grizzly bear cubs. They are both males.

Their arrival is the culmination of a rescue that involved wildlife officials and zoologists in three states.

“The fact that we can provide these two cubs with a home in our recently reconstructed grizzly bear habitat is a wonderful outcome for a tragic story that began when their mothers were killed,” said Northwest Trek Zoological Curator Marc Heinzman.

“Both cubs are active, healthy and doing well,” said bear keeper Angela Gibson. The Alaska cub quickly made himself at home, rearranging the logs and other “furniture” in his den, she added.

The Montana yearling is a lean, blonde-colored bear with dark arms and feet. He has the balance skills needed to climb the log structures in his den as if they were trees, Gibson said. And he quickly dug out a depression in a mulch pile so he could curl up in it to sleep.

She also described him as quiet, watchful and a bit shy. “He has the confidence to handle himself and not just react,” she added. “Mom taught him well.” 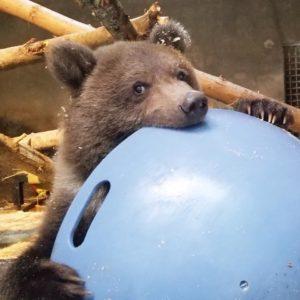 The Alaska cub is more chocolate colored with a white crescent moon collar reaching 90 percent around his neck. Although younger, he is taller and more filled out than the Montana yearling.

He’s demanding at meal time, eager to play with his enrichment toys and quick to bang around in his den with anything he can carry or throw.

There is no date set for the cubs’ public debut. They must first get comfortable in their new home, bond with their keepers and learn how to move from their dens to the outdoor exhibit and then back inside.

Gibson is hopeful that the older cub, who spent a year with his mother before she was killed, will be helpful in teaching the younger cub some natural bear behaviors.

In the wild, a cub normally would stay with its mother, learning the ways – and dangers – of the forest, for its first three years. Without this nurturing, cubs do not learn to forage for the food they need, nor to protect themselves as they grow.

The cubs are comparatively small now; they will grow into the hundreds of pounds and eventually stand a few feet tall at the shoulders.

They don’t have names just yet. Our keepers will propose a slate of names for each cub, and we’ll post information on how you can vote for your favorites.