It’s a sunny spring afternoon at Northwest Trek, and in the Free-Roaming Area pond a small turtle is basking on a log. Keeper Dave Meadows, passing by, stops the truck and whips out a camera – because this is no ordinary turtle.

It’s a rare western pond turtle, endangered in Washington. And it’s the first one seen at the wildlife park in two years.

“You really only see them in spring, when they come out of hibernation and it’s sunny, but before the water levels fall too much,” says Meadows. 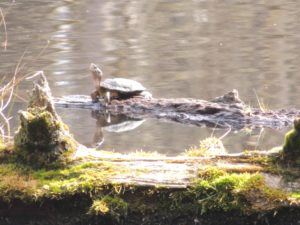 Western pond turtles are around 4-8 inches long, with squarish, greeny-brown shells and mottled yellow-green skin. As the name suggests, they’re native to the West Coast, from Baja California to Washington – and they’re endangered. Loss of freshwater habitat, predation on hatchlings by invasive American bullfrogs, disease and human hunting have all contributed to a steady decline over decades.

In fact, by 1990 western pond turtles had completely disappeared from the Puget Sound area, with only around 150 turtles left at two sites in the Columbia River Gorge.

Enter the Washington Department of Fish and Wildlife, who with the Woodland Park Zoo began a turtle recovery program breeding turtles and releasing them to the wild.

Six non-releasable turtles were given a home in the Northwest Trek pond in 2005. Although they kept to themselves, Meadows says at least one or two have been seen every spring since then – but not in the last two years. Comparing this year’s photo to a previous one, Meadows thinks it may possibly be the same turtle.

“We thought maybe they just hadn’t made it,” he said. “So to see them back again is pretty cool.”

Western pond turtles are slowly recovering, with around 1,000 animals now living in two South Sound sites – one is in nearby Lakewood – and four Columbia Gorge sites. But they remain rare.

Spreading the word on pond turtles

Jessica Moore is at the forefront of the turtle recovery. Education curator at Northwest Trek, she serves as the public engagement lead for the Association of Zoos & Aquariums’ SAFE conservation team, coordinating 10 zoos in Washington, Oregon and California to spread the word about western pond turtles and the need to protect them. The plan she helps spearhead includes social media, onsite education materials at partner zoos, a K-12 curriculum and organizing World Turtle Day activities to give this reptile some much-needed publicity.

(The next World Turtle Day will be May 23 – stay tuned for what’s happening at Trek.)

All this is why Meadows – and other Northwest Trek staff – were so excited to see that little turtle sunning itself in the lake.

Visitors can keep an eye out for the turtles as well, especially on sunny days when they, like all reptiles, like to soak up the heat. 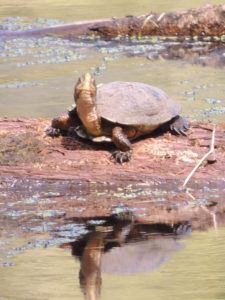 More important, though, is what we can all do to help the western pond turtle climb back from its endangered state, whether we see them or not.

“There are three basic ways to help turtles,” says Moore. “First, keeping water and wetland habitats clean. Wash your car in a commercial wash or in your yard, use natural yard care instead of chemicals and don’t dump trash. Next, don’t release pet turtles into the wild – as non-native species, they’ll out-compete native turtles.”

The third way sounds obvious, but it still needs to be said: Don’t take turtles from the wild as pets.

“Western pond turtles play an important role in keeping wetlands healthy,” says Moore. “When we lose a species, we also lose the natural balance in an ecosystem. Wetlands are vital to our community’s health – and we must protect all species, large and small, to maintain our own way of life.”

LEARN MORE: Find out more about western pond turtle conservation on the Washington Department of Fish and Wildlife site.

CELEBRATE: World Turtle Day is May 23. Check our Facebook page to see what we’re doing!