“If a big hungry moose comes to visit, you might give him a muffin to make him feel at home. If you give him a muffin, he’ll want some jam to go with it. When he’s eaten all your muffins, he’ll want to go to the store to get some more muffin mix…” You know the famous children’s book by Laura Numeroff. But… what if you give a moose a carrot?

“If you give Birch a carrot, he listens really well!” explains keeper Jordan. “And chances are if you give him a carrot, he’ll want some lettuce to go with it.” (Birch is allowed to eat a tiny amount of carrots.)

Jordan has been training Birch, the eight-month-old moose calf, twice a day every day since he arrived at Northwest Trek Wildlife Park in November.

“Training him allows his animal care and veterinary teams to easily give him wellness exams when needed,” said Jordan. “We’re earning his trust so we can check his neck and head, take blood draws, and eventually pick up his hooves and treat them if needed.”

Birch is currently working on walking between two keepers. On one brisk winter morning, Jordan and keeper Deanna stood 20 feet apart from one another. Each keeper had a target and clicker. The target was a long pole with a ball on the end. The clicker was a small noise making device that they click each time Birch completes a desired behavior or action. That noise becomes associated with the behavior they’d like Birch to repeat.

Birch walked to Jordan and tapped his nose to the target. Jordan pushed the clicker. And Birch got his reward. 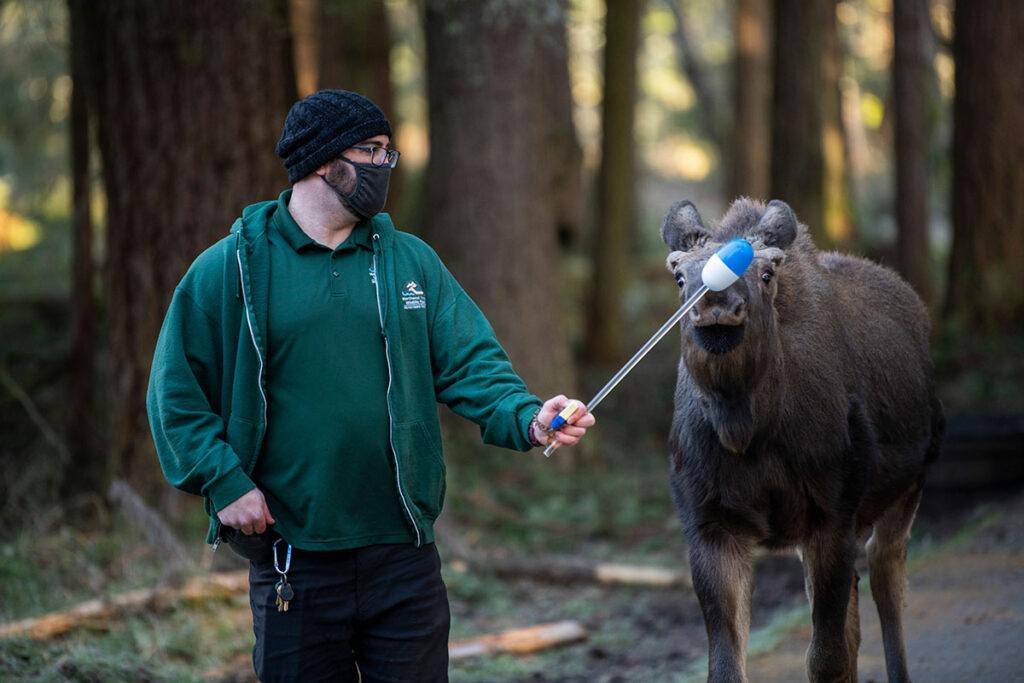 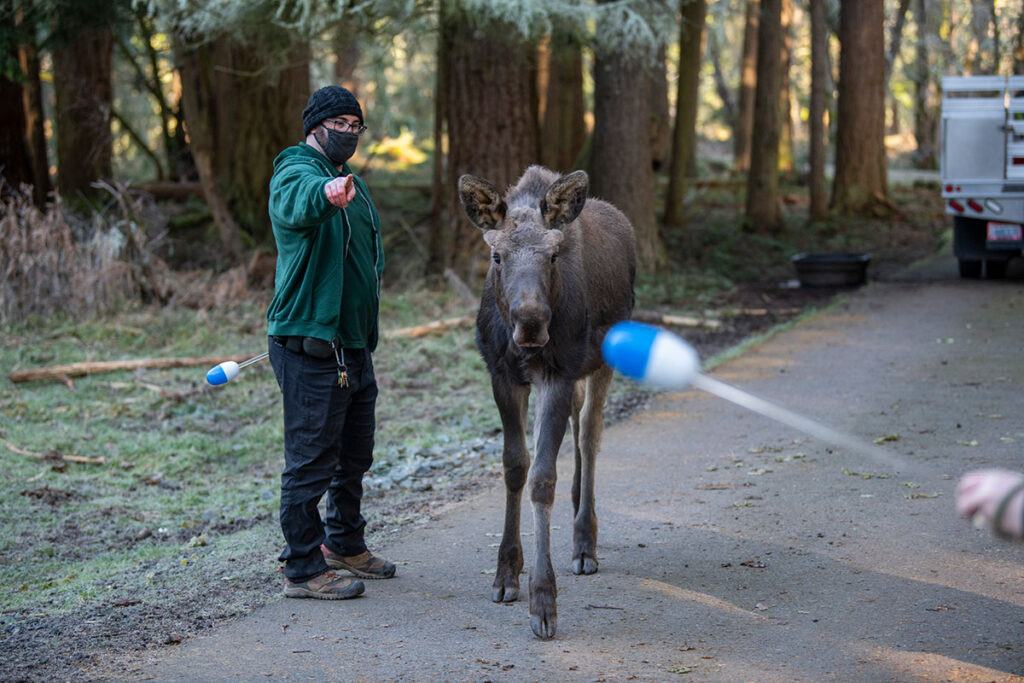 He understood and made his way over to her, where he once again tapped his nose to the target, heard the clicker, and was rewarded with a small amount of carrots.

Birch is also trained to step on a scale for keepers to monitor his weight and growth. In January, he weighed 407 pounds. That’s 110 pounds more than he weighed when he first arrived as a five-month-old. It’s a healthy weight for a growing calf his age.

“Want to see something else?” Jordan asked. “Back!” Jordan told Birch, as he put his arm straight out in front of him. 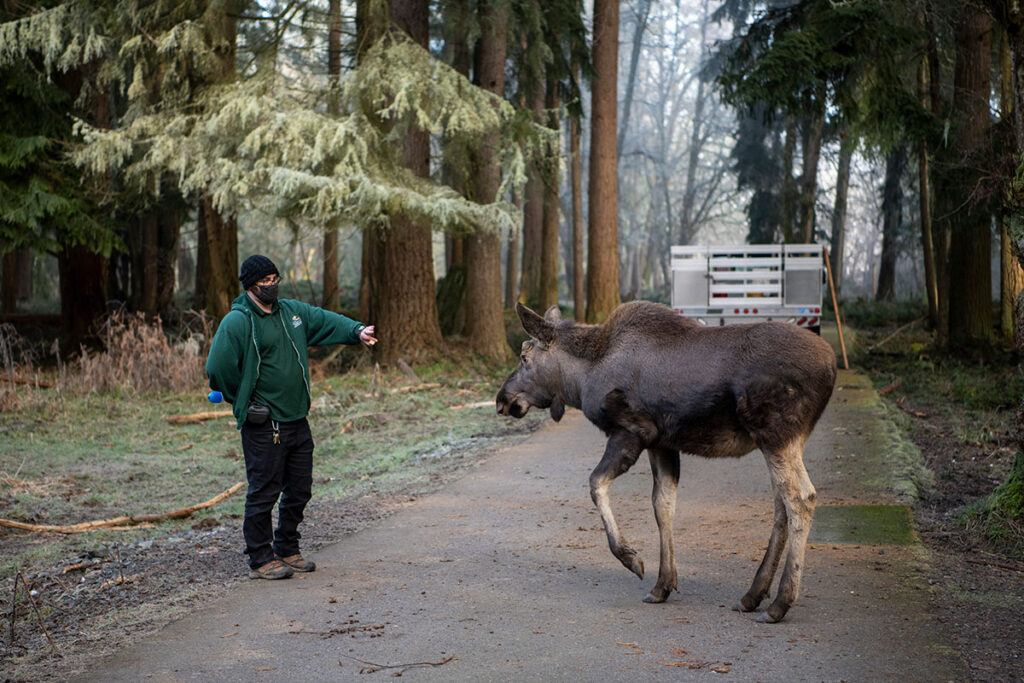 Birch, with his long legs, awkwardly backed up, one hoof behind the other until he heard Jordan’s click. When he stopped, he was given some lettuce.

“This way, as he gets older and much bigger, if we need some space from him, he knows he needs to back up from us,” said Jordan.

After an attention span of about 30 minutes, a bird chirped. And a pile of appetizing-to-him sticks nearby caught his eye. And therefore, Birch was done with training for the day. After all, he’s still only a calf. 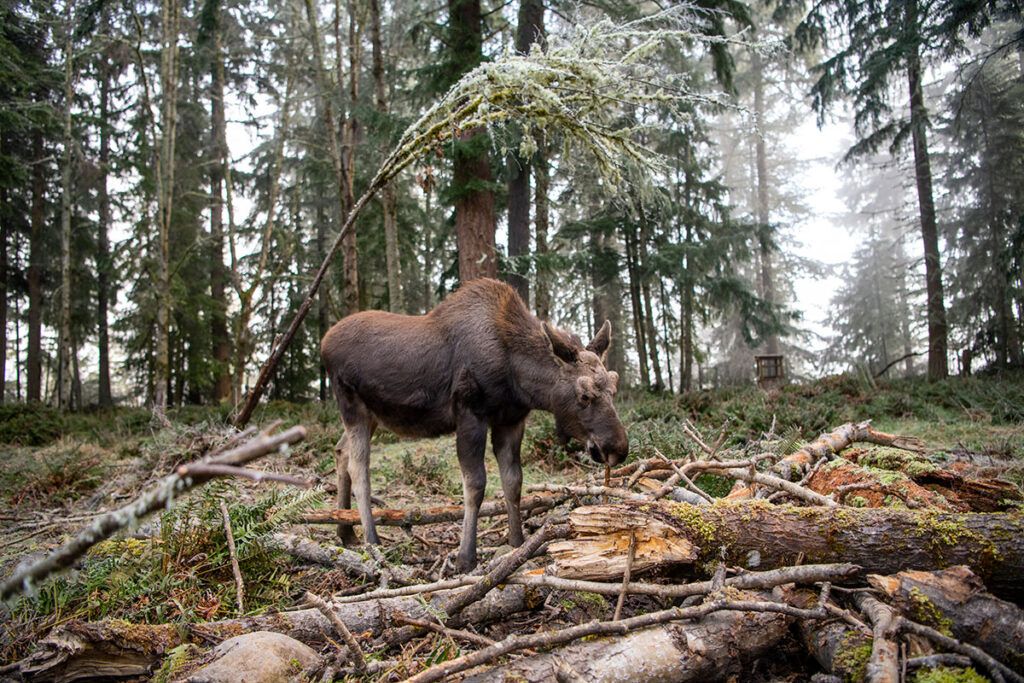 “We take all of our cues from him and he decides whether he wants to participate,” said Jordan. But he really seems to enjoy his sessions with us, and I do too. It’s exciting to watch him grow and learn more every day.”