North to Alaska: Getting our grizzly cub

Blog Home
North to Alaska: Getting our grizzly cub

I’ve arrived for my first ever visit to Alaska, and I was immediately struck by the expansiveness and beauty of the landscape. As soon as my plane broke through the low clouds during our descent into Anchorage, I had my first views of the emerald green coastal waters and a backdrop of dark mountains looming in the distance. Even before we touched down, the far too fleeting glance of that amazing landscape had me thinking about why I was here. I couldn’t help but picture bears splashing about as they fished on those shores or ambling across those mountain ridges in search of a most excellent insect snack to be found under just the right overturned boulder.

In Anchorage, a bear was waiting for me.

At the same time, this is both the start and nearly the finish of some big things for Northwest Trek Wildlife Park. I’ve made my way to Alaska to meet an orphaned grizzly cub that will return to Washington with me as the newest resident of our grizzly bear habitat. For the last year, we have been working to renovate the large natural space to prepare it for the next generation of bears at Northwest Trek. The habitat was built in 1993, and it served as the beautiful forested home of two really amazing bears – Hudson and Denali. After those two lived out their long lives with us, the renovation work began. Now, that work is nearly complete and it’s just about time for its newest resident to move in.

For the past few months, the Alaska Zoo here in Anchorage has been caring for a bear cub that was found orphaned near Nome. Tragically, the cub’s mother was illegally killed by poachers, and he was too young to survive in the wild on his own. Normally, grizzly bear cubs will stay with their mothers for around 3 years, but this little guy was less than 6 months old when he was found.

Tomorrow, I will meet this cub for the first time, and I couldn’t be more excited. Under the care of humans, grizzly bears can live for decades. So, as the Zoological Curator, I’m hopeful that this bear will be a part of the Northwest Trek family for years and years. It’s difficult to know what to expect from any new animal – they all have their own unique personalities – but I do know for sure that it will be an incredible experience. One that I’m proud to be a part of.

After spending an evening in Anchorage getting settled in, today was the big day. I was finally meeting our newest grizzly bear. Last night, I’d watched the sun set well past 11 p.m. – the sky slowly slipping from blue to hues of orange, then pink, and finally purple. The slow but steady change in the sky first earned my attention because of just how long it was taking. The lengthy summer days are one of my favorite things about life in the Pacific Northwest, and naturally they are even longer this much further north. But beyond the lateness of the setting sun, I was also thinking about how it was emblematic of a changing era for Northwest Trek.

As I mentioned yesterday, this bear cub for which I’m here was preceded by two bears that spent decades as part of our family. And now, a 6-month-old bear cub is the beginning of decades more bear history for Northwest Trek. Heck, this cub has the potential to outlast me and most of the other staff as he lives his life past all of our retirement dates! The gravity of that notion was not lost on me. In fact, it made me even more excited for what’s to come.

After arriving at Alaska Zoo (and snapping the requisite selfie in front of the Zoo’s sign), I scanned the park map until I found what I knew must be the right spot in the far corner – an illustration of a bear cub with the words “Orphan Facility” above it. My excitement ratcheted up another notch, and I buzzed past all the other animal enclosures with hardly a glance. No offense, other animals – I was a man on a mission! With each step, the gravel pathways crunched under my feet almost as if beckoning me onward to my first in-person glance at our new cub. 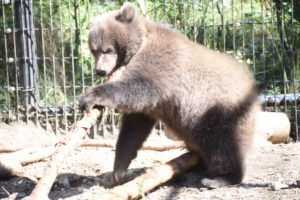 Suddenly, I spotted him. Tottering around the enclosed yard where he’d been nursed into good health by the Alaska Zoo team, he was more adorable than I expected. And true to what I’d been told, he was enraptured with his favorite toy – a stick larger than he was. I was instantly drawn in by his antics. He flipped the stick around with the skill of a well-practiced baton twirler, yet it was apparent that he was still working out the proper function of his own young limbs. He stumbled and tumbled over on more than one occasion, yet was undeterred in flipping his stick toy. Clearly, he considered it to be very serious work.
After realizing I’d stopped in my tracks to watch him, I moved closer to get a better view. Suddenly noticing me, the cub dropped the stick and stood up on his hind legs in surprise – a common bear behavior. Deciding I wasn’t any sort of threat, he returned to his task. Shortly thereafter, I was joined by my curator counterpart from Alaska Zoo, Shannon Jensen. Shannon greeted me and took me “behind the scenes” into the building where the cub was living when he wasn’t outside. Here, I got my first up-close look at him, as we met eye-to-eye through a mesh door.

Shannon set up some treats in his yard, scattering them amongst logs and toys to encourage him to forage for them. Ever so vocal and rambunctious, he made quick work of finding his food. As he pulled apart a pile of logs with the determination of a bear many times larger than his tiny size, a zookeeper passed by me and jokingly asked, “So do you think he’ll be enough of a bear for you guys?”

“There’s a bear in there?!” the cargo attendant asked excitedly. We’d just arrived at the Alaska Airlines cargo facility in Anchorage to drop off the bear cub for his journey to Northwest Trek Wildlife Park. After having been a part of dozens of animal shipments over the course of my career, seeing the delight that “outsiders” get from being up-close with our animals is always a nice reminder of just how special my job is. It was time for our new little bear friend to begin his journey.

There’s always a certain level of anxiety that comes with an animal shipment. As animal care professionals, we would prefer to have control over the process at all times. However, that’s often not possible when it’s time for an animal to fly on an airline. So there we were, dropping off this cub the necessary 3 hours before his 2:30 a.m. flight. The team from Alaska Zoo said their goodbyes, and I transferred around to the main passenger terminal to get ready to board the flight myself.

By the time it was time to depart Anchorage, I’d been awake for something like 20 hours – and I knew there was at least another 8 hours to go. A flight at 2:30 a.m. sounds pretty unusual, but we prefer those odd hours for several reasons. It’s cooler and therefore more comfortable for the animal during the entirety of the journey. It’s also when the bear would normally be sleeping, so it’s a good time for him to settle in and rest once he’s on the plane. And, of course, it makes it easier for us to pick him up at Seattle-Tacoma International Airport if we don’t have to battle rush hour traffic on I-5.

While I was on that flight from Anchorage to Seattle, I contemplated the symbolism of bringing this bear to Washington. I’ve been heavily involved in advocating for the restoration of grizzly bears to the North Cascades ecosystem, which is an action proposed under the Endangered Species Act recovery plan for the species. This restoration plan would involve relocating grizzly bears from British Columbia, Canada, into North Cascades National Park. It’s an important conservation project for Washington, as grizzly bears are a vital component of the ecosystem, and the species is critically endangered in the state.

Three and half hours of flight time and a time zone change later, we landed at Sea-Tac. After disembarking from the plane and making my way t to the Alaska Airlines cargo facility, their team wheeled out the bear in his shipping crate to our waiting van. One of our bear keepers, Angela Gibson, and our veterinarian, Dr. Allison Case, drove up with the van to help me bring the cub home. Seeing the delight in both of their faces as they met him for the first was really special and quickly made the exhaustion of a full day with no sleep wash away.

After arriving at Northwest Trek, we smoothly unloaded his crate at our bear den area. In no time at all, he was out of the crate and exploring his new surroundings. Just like that first time I laid eyes on him, I was fascinated by his antics – a playful grizzly is definitely hard to look away from. Knowing that he will be a member of the Northwest Trek family for years to come has made this one of the most significant experiences of my career. There are those moments in your life when you can tell it will be a key memory as they’re happening, and I know for sure seeing him arrive here is one of those.