How to Train Your Cougar

Blog Home
How to Train Your Cougar

With the grace of a ballerina and the timing of an opera diva, Carly the cougar pads into her den. Behind the scenes at Northwest Trek Wildlife Park, the den has a mesh wall with a waist-high perch on one side, where keeper Haley Withers is waiting patiently outside with some meatballs.

“Come on, girl,” she calls softly.

Carly pauses. Looks the scene over. Then in one swift movement she’s up on the perch, positioning her tail near a small horizontal opening.

“To train any animal, you need their trust,” says Withers. “Earning Carly’s trust takes a while – she needs consistency. But it’s worth it for the relationship, and how it helps her take part in her own care.”

Like many Northwest Trek keepers, Withers constantly trains animals to do basic behaviors that help humans look after them: moving between habitat spaces to allow cleaning, lifting a paw or opening a mouth so someone can check their health. Positive behaviors are rewarded, incorrect ones are not.

But what Carly and Withers are about to do today is a major event for this reserved, cautious cat: a practice session for drawing blood.

“If we need to give her a vaccine, or take a blood sample to test and diagnose, it’s super-important that she can voluntarily hold while we do that,” Withers explains.

It’s one of the most challenging behaviors – especially for a cougar – and one that has taken both human and cat nearly five months to achieve.

First comes a warm-up. Withers lets Carly take her time coming into the den – “She wants me to turn my back, so she can stalk me” – then rewards her for coming and standing on her “station”, a black mat that’s a safe distance from the locked door.

Next, Withers asks the cougar to jump onto the waist-high platform – again, generously rewarded with the raw meat that makes up the cat’s daily diet.

“She needs to know that the platform is a fun place,” says Withers.

Carly also needed to get used to the small opening in the mesh that lets her put her tail through and onto a second platform (custom-made by Withers) on the keeper’s side. The opening is about the size of a human forearm – and a cougar paw. So it’s vital that Carly learn to stay calm and look away, to show she’s not at all interested in that opening.

“This training is 100 per cent focused on safety for me and the veterinary technician who’d be helping during a real blood draw,” explains Withers. “We have to be super-cautious.”

More rewards, and Carly is staying calm, though she’s vocalizing constantly in a low hum.

“That’s typical,” says Withers, unconcerned. “She likes to comment on everything we do.” 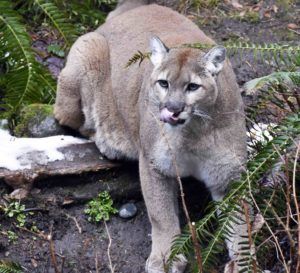 Working inches from a grumbling cougar might not be everyone’s cup of tea, but Withers continues with the small steps that have each taken several weeks to achieve: keeping her tail still, allowing Withers to hold it down, then allowing a touch with a blunt needle, then a sharp one. With each step, Withers removes the item and feeds meatball after meatball to the eager cat. (During the real event Withers would stay near Carly’s head, feeding her, while the vet tech worked on her tail.)

“She can leave anytime she wants,” Withers points out. “But she stays, participates, even lingers afterward. That’s pretty cool. It’s so hard for cats to hold their tail still, and what she’s willing to do is just incredible. She’s an amazing animal.”

But the human behavior is also pretty amazing. Withers started at Northwest Trek as a college intern in 2013, then landed a keeper job part-time, then full-time. She’s been working with Carly for a few years now, as well as the other carnivores at the wildlife park, and it’s clear that the two have a bond. Petite and quiet, Withers admits she has an affinity for cats, especially this one, who unlike, say, Tanner the bobcat, is picky about humans.

“She’s so sassy!” says Withers. “I love breaking through that, through the walls she puts up. She’s got to know you, you’ve got to earn her trust and have some finesse.”

Awe for the wild

When Withers was 12, growing up near Northwest Trek, she saw a wild cougar – her first and only time so far.

“I was in the car and a deer ran across the line of the forest behind my house,” she remembers. “Then right afterward a cougar followed it. It was so cool! I thought, that’s the cycle of life, right there.”

And so, when Carly held still for her first-ever blood draw, five months after starting training, it was a huge moment for Withers.

“I love working with her – she’s in my heart,” Withers says, simply.

It’s not over yet. Northwest Trek just got a new veterinary technician, so now Withers has to repeat the training process to acclimate Carly to a stranger. And there’s always the chance Carly will backslide from day to day – it happens to all of us.

But that’s the challenge that Withers clearly relishes.

“Carly isn’t sweet and cuddly,” she says. “But she acts differently around me than other people, because we’ve built this relationship to find out what she wants, get to know her. It’s made a difference to in how she responds to other keepers, as well – since we started training, she’s become more even-keeled toward other people who work in the area. And now we can take even better care of her. It’s so cool to make that possible.”

MEET CARLY: You can see Carly the cougar in her habitat along the Cat Loop trail at Northwest Trek.

MEET HALEY: Keeper Haley Withers takes turns with other keepers at the carnivore Keeper Chats – check the noticeboard near the park entry for times.