The look on Tymbre Green’s face was irreplaceable.

As she stared out into the wet green woods of the Northwest Trek gray wolf habitat, two wolves loped up and nosed around a fallen log. With swift precision, one snapped up something in her jaws and began to munch.

It was a pumpkin – one that Tymbre herself had just hidden in the log with a keeper, while the wolves were safely behind the scenes.

Even more impressive? It was a pumpkin that one of Tymbre’s classmates – now third-graders at the local Weyerhaeuser Elementary School in Eatonville – had planted and grown themselves in Northwest Trek’s pumpkin patch last spring.

“This is an amazing thing for these kids to do,” commented Jake Pool, Trek’s horticulturalist, who had offered the experience to the school as part of their gardening program. “But it’s also great for our animals as enrichment and nutrition.” 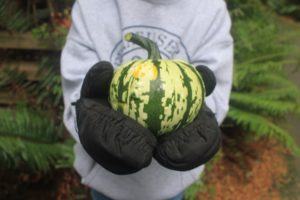 Healthy Food for Everyone

Run by volunteer parents including Pool’s wife, Kristin (the Pools’ son Blake and daughter Brooklyn are students there), the Weyerhaeuser gardening program teaches kids about growing their own food. But this year, Pool suggested they also grow food for their animal neighbors.

“Every year we give pumpkins to our animals as part of the Pumpkin Chomp ‘n’ Stomp event,” Pool explains. “But I noticed that some of the carving pumpkins weren’t very nutritious.”

So Pool researched pumpkin and squash varieties on the USDA website, picking those that had plenty of nutrients and sugar for taste. Second-graders at Weyerhaeuser planted the seeds in spring in their school greenhouse. Meanwhile, teen volunteers from the Bush School in Seattle prepped a pumpkin patch, covering grass with cardboard and Trek-created compost.

The then-second graders – including Blake Pool – came out to the wildlife park to plant their starts and mulch them.

Four months later, six of the now-third-grade students –plus six new second graders – returned to find a fully grown pumpkin patch ready to harvest – and feed to some very interested animals. After securing the wolves, keeper Haley Withers carefully led a group around the habitat, pointing out logs and other hiding spots.

Then, back on the visitor side, the fun began.

“Look, he’s got my pumpkin!” called Blake excitedly, as a wolf discovered a white pumpkin in a hollow.

“This is really fun for our wolves, too,” said Withers, looking on and answering animal questions. “They’re smelling you guys on those pumpkins, that’s all new and interesting to them.”

Over at the grizzly bear cub habitat, things were just as interesting – though much swifter. After Withers hid a couple of four-inch pumpkins, Hawthorne the cub was let into the space – and ran almost immediately to his favorite log to discover a tiny orange pumpkin. It didn’t last long.

“Look, he’s chomping it up!” came the cry – followed by an earnest discussion of grizzly bear diets.

Finally, it was the turn of the otters, who immediately sent one round pumpkin rolling down an angled log and happily splashed around with the other in their pool, to shouts of delight from the students above. 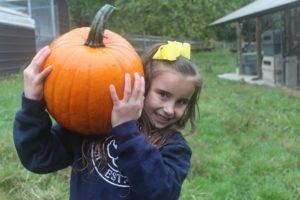 Over in the Trek pumpkin patch, the students got to work harvesting the rest of the 150-odd pumpkins to be given to animals during Pumpkin Chomp ‘n’ Stomp on Oct. 27 and throughout the winter. They marveled at the huge variety Pool had chosen: big orange Cinderellas, pale white Caspers, small pear-shaped yellow squash with fingers of green, stripey green minis and an orange/yellow hybrid that had seeded itself from the compost.

There were also “Naked” pumpkins – so named for the lack of hulls around their seed, allowing smaller animals to better access the nutrients inside. One giant pumpkin looked about three feet across and 100 lbs.

Even school principal Linn Ames was put to work snipping stems and helping her students pick up their harvest to put on the truck.

“This is such a good science opportunity,” she said. “We’re a STEM (Science, Technology, Engineering, Math) school, so this is a perfect chance to combine science with nature. It’s like Northwest Trek is an extension of our school!”

But Tymbre Green summed it up best. Asked how she felt about seeing her tiny seed grow from start to pumpkin, and finally to animal enrichment, her eyes grew big. 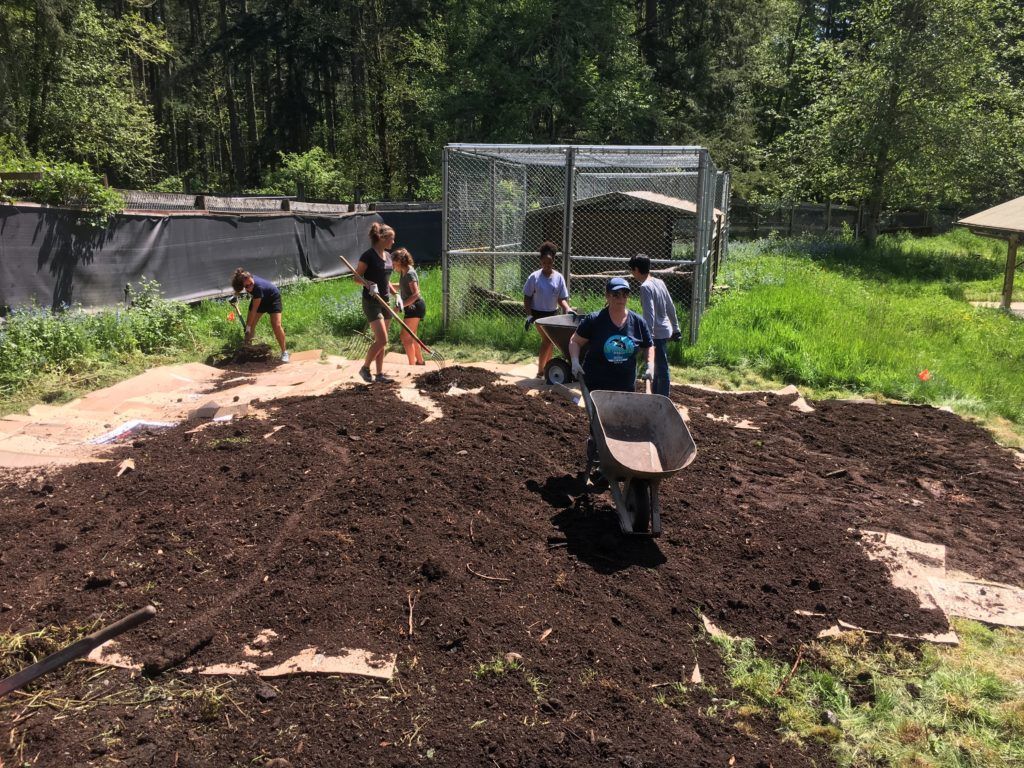 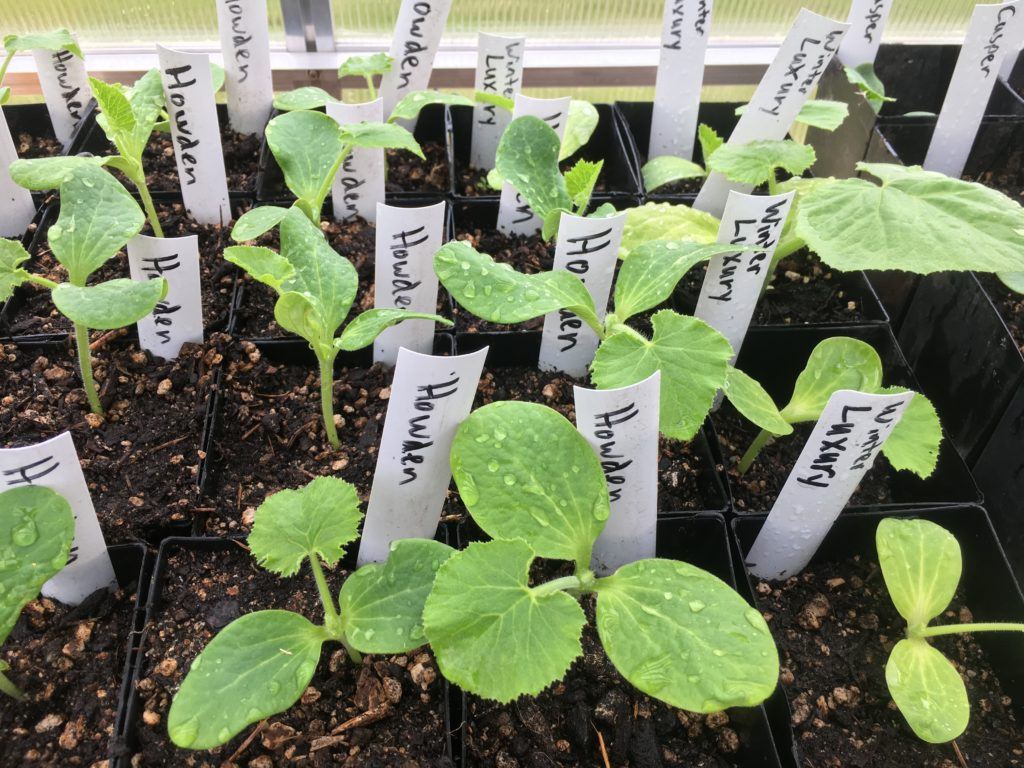 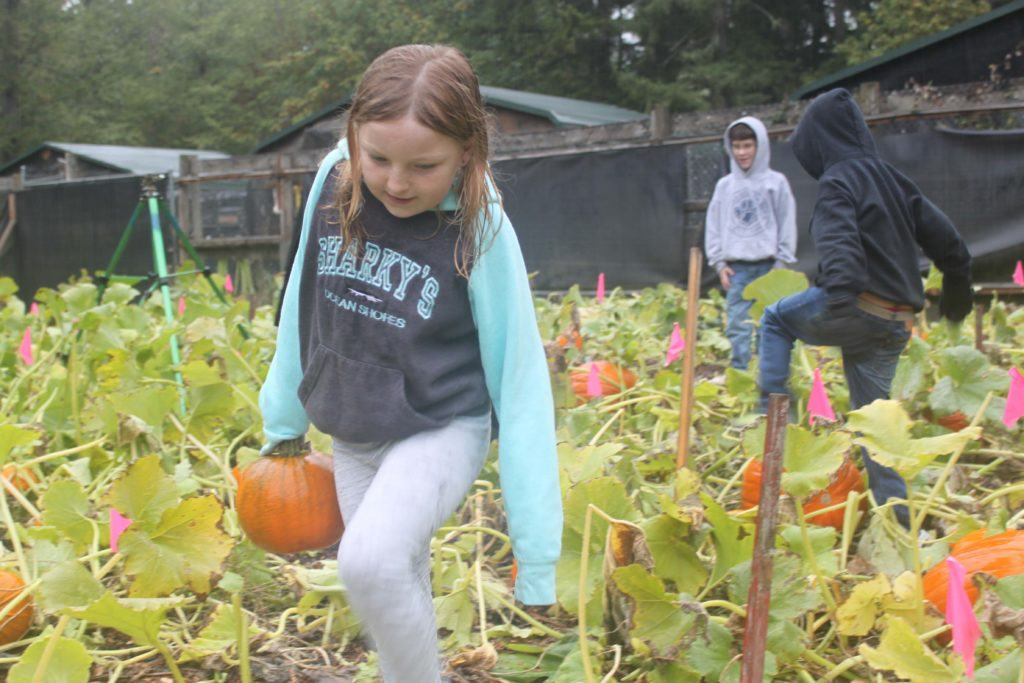 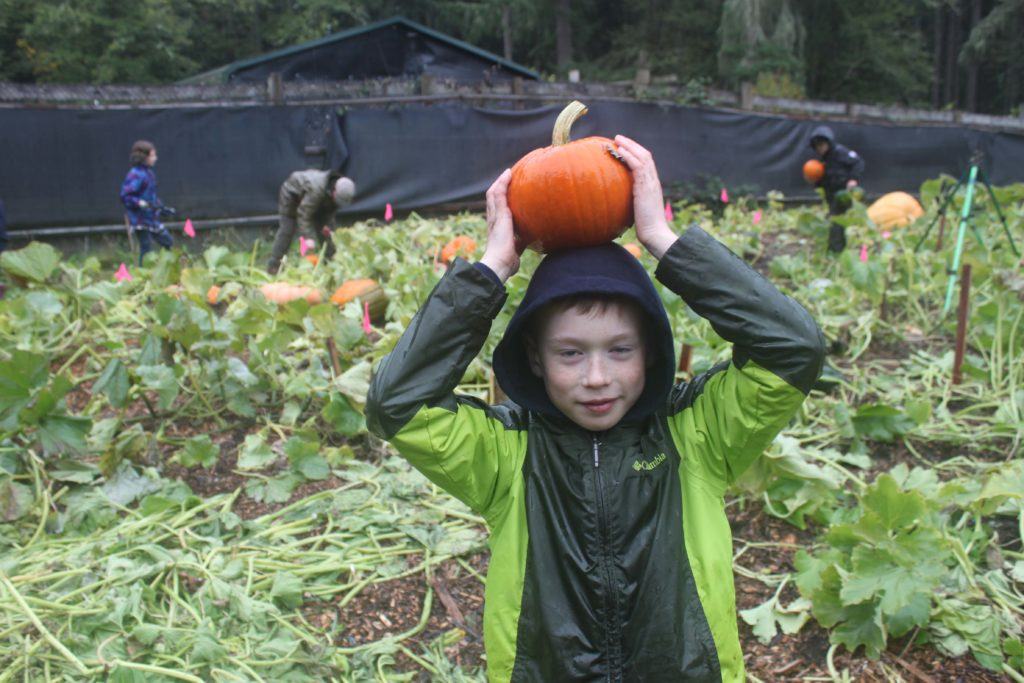 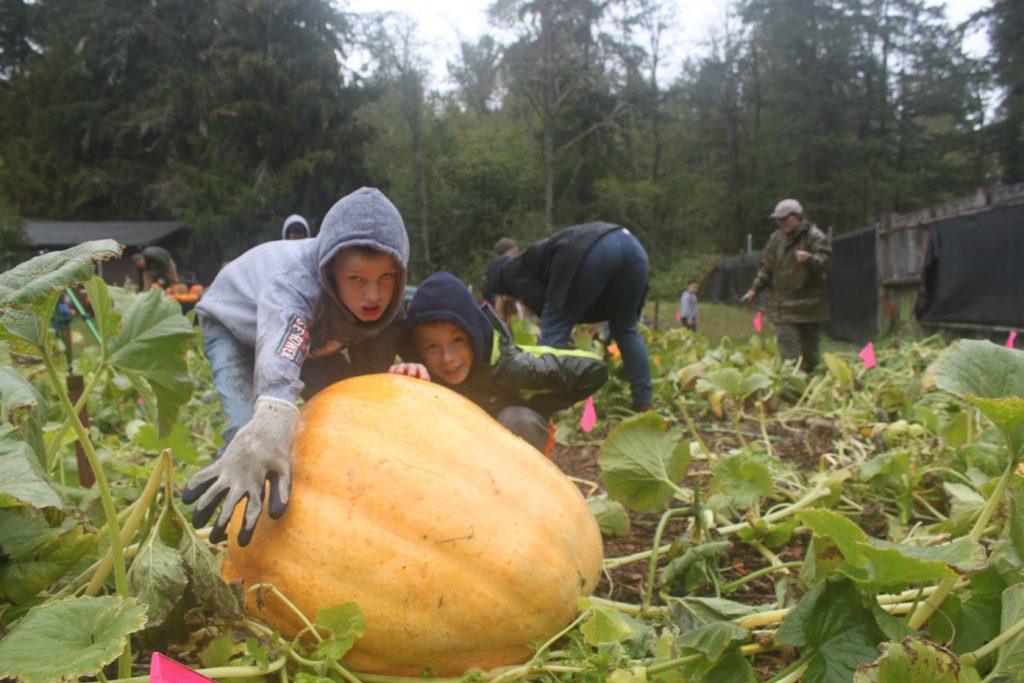 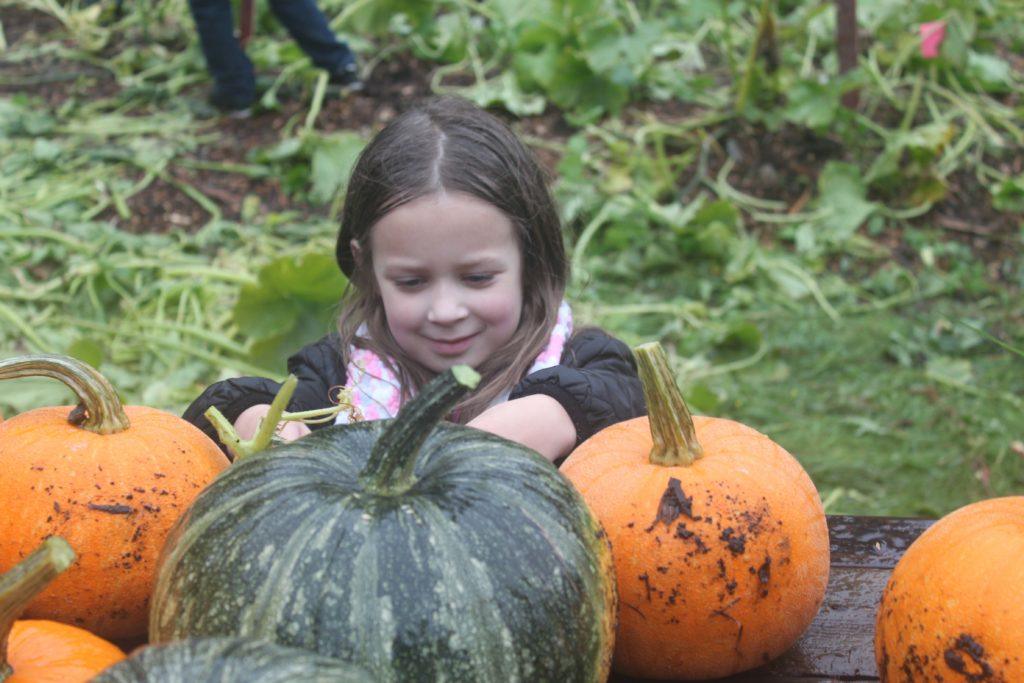 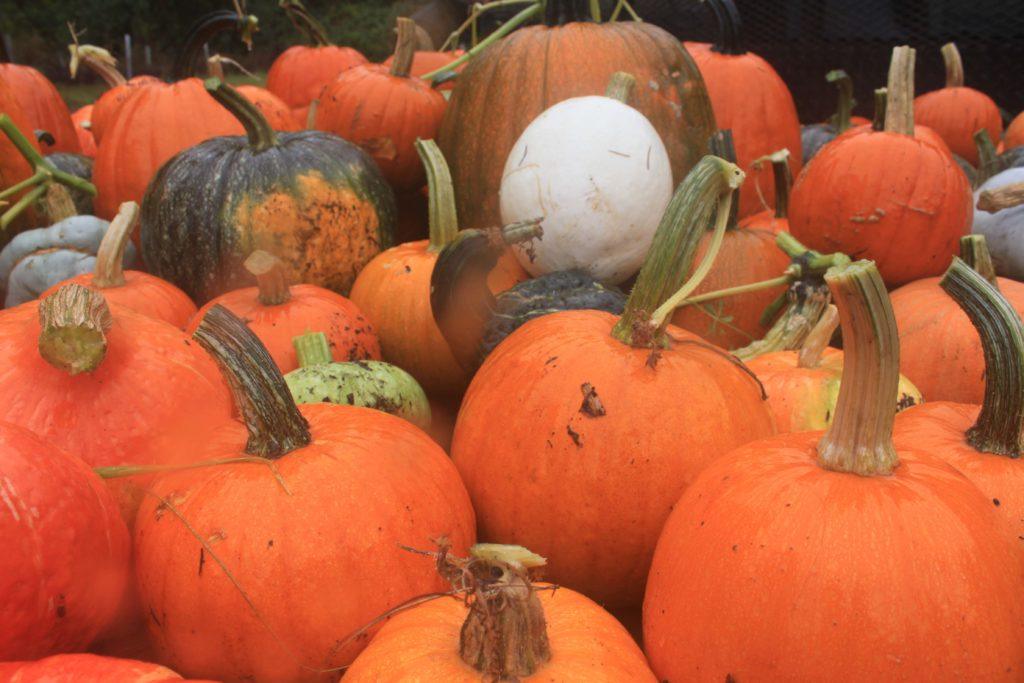