Eatonville, Wash. – Guests will barely get through the entrance to Northwest Trek Wildlife Park before the gasps of delight begin.

“Look! Up in that tree. I see a white head. Is that an eagle?” they are likely to ask themselves. A bald eagle? Majestic raptor? Symbol of America?

Yes, indeed, it is. And not just one. Several. 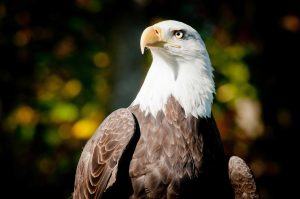 The white feathered heads will soon be visible among the soaring evergreens a short walk from the wildlife park’s entry.

Not only will it showcase these iconic American birds, the new exhibit will tell their conservation story from near-extinction in the continental United States half a century ago to a population numbering in the thousands today.

The wildlife park celebrates its 44th anniversary on July 17.

“We are opening one of the most exciting, interactive animal habitats in the history of Northwest Trek and showcasing America’s symbol – the bald eagle – in a breathtaking way,” said Aaron Pointer, president of the Metro Parks Tacoma Board of Commissioners.

As Northwest Trek’s guests walk through the habitat, they’ll see the eagles on branches, perches or snags amid towering evergreens. The birds could be on either side – or above – the walkway. Visitors will view them through a mesh material that allows an intimate experience while at the same time protecting the animals. Each of the eagles inside has its own story; none is releasable to the wild.

“We believe our guests will instantly connect with these animals, learn the story of the species’ recovery, and leave thinking about things they can do to protect eagles and other animals in the wild,” he added.

“People will be wowed by Eagle Passage,” she said. “It’s impossible to get that close to an eagle and not leave with a broad smile on your face. We think those smiles will turn into conservation commitments.”

The non-profit foundation raised $500,000 to finance the exhibit’s construction.

Portions of the exhibit will not just be immersive, they’ll be just plain fun.

Guests can crawl into a life-sized eagle’s “nest” and feel what it’s like to be a bird, or spread their arms against a life-sized graphic of an eagle’s wingspan to see how they measure up.

Bald eagles, once plentiful across the United States, were close to extinction in the Lower 48 states by the middle of the 20th century. The Endangered Species Act and other laws, such as a ban on the pesticide DDT, afforded them the opportunity to safely reproduce. The species is no longer endangered and is more than a national symbol; it is an example of how people working together can help protect wild animals and wild places.

Signs and graphics throughout Eagle Passage will tell the species’ story, and a digital station at the exit will help guests make pledges to protect wildlife and wild places.

“Get ready for an up-close, eagle-eye view,” said Northwest Trek Education Curator Jessica Moore. “Eagle Passage will be something to see.”

###
Northwest Trek Wildlife Park, accredited by the Association of Zoos & Aquariums, is a 725-acre zoological park dedicated to conservation, education and recreation by displaying, interpreting and researching native Northwest wildlife and their natural habitats. The wildlife park is a facility of Metro Parks Tacoma and is located 35 miles southeast of Tacoma off State Highway 161.

Back to Newsroom Explore Eagle Passage