Over 1 million guests combined, thanks to new aquarium, grizzly cubs and more.

TACOMA, Wash. – We built it, and our guests seized the day! They came in waves. 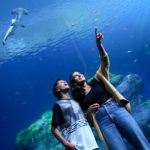 The Sept. 7 opening proved a watershed moment for the community – and for the zoo. Visitors by the thousands came to spend time up-close with creatures like Japanese spider crabs, a charismatic California sheephead named Buddy, an engaging octopus named Oswald, sea turtles Sunny and Azul and all of their finny friends.

By year’s end 820,776 guests walked through the turnstiles during 2018, the largest such total in Point Defiance Zoo & Aquarium’s 113-year history.

“We promised voters a world-class aquarium when we asked them to pass a bond issue in 2014 for a number of zoo and parks improvements,” said Metro Parks Tacoma Board of Commissioners President Andrea Smith. “We think the Pacific
Seas Aquarium is a wonderful testament to the generosity of Tacoma taxpayers.

“This state-of-the-art aquarium will bring delight, wonder and curiosity about our ocean to generations of guests over the next several decades,” Smith added. 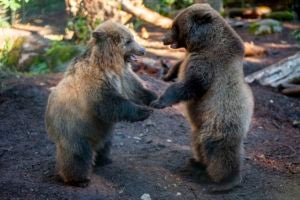 “With every step forward our guests can see continued enhancement to the quality of care we provide our animals, and our increasing efforts to inspire greater environmental stewardship,” said Alan Varsik, director of Zoological & Environmental Education for Metro Parks Tacoma.

“Reaching 1 million for the first time is a wonderful indicator of Point Defiance Zoo & Aquarium and Northwest Trek’s importance and relevance to our community,” he added.

• A new-to-the-zoo Sumatran tiger, Bandar, will make his public debut this weekend (Jan. 12-13). Special enrichments and keeper talks are scheduled at 12:30 p.m. Saturday and Sunday. The zoo also will bid farewell to Sumatran tiger Dumai, who is moving to Wildlife Safari in Winston, Ore., through an SSP recommendation.

• Malayan tapir Yuna is pregnant and due to deliver a calf this summer.

• Red wolves Charlotte and Hyde arrived at the zoo this week with a breeding recommendation from the SSP. It’s possible that Hyde, who was born at the zoo in 2012, could become a father this spring.

• The zoo will continue groundbreaking development of artificial insemination protocols for tigers this spring. The work will bank valuable sperm and potentially result in pregnancies for females at the zoo. There are fewer than 300 Sumatran tigers left in the wild on their native Indonesian island of Sumatra.

• There’s more to come in the zoo’s Pacific Seas Aquarium, too. Animals are still being added, and a month-long community celebration of this new jewel in Tacoma’s environmental crown is set for April.

• Working with federal and state agencies to find homes for mountain goat kids who could not be paired with their known mothers during a relocation of goats from Olympic National Park to the North Cascades. Five of the kids are now living in the Free-Roaming Area at Northwest Trek.

• Providing homes for two orphaned grizzly bears, one from Alaska and one from Montana, and for two badgers orphaned in Eastern Washington.

• Continued participation in the fisher reintroduction project in the North Cascades, in cooperation with federal and state agencies and private organizations.

• The wolverine exhibit is being renovated, and two wolverines will soon be on exhibit, including two familiar furry faces who previously had homes at Northwest Trek.

• Eagle Passage is due to open in the spring, showcasing our symbolic national bird and telling the story of a nearly-extinct species that made a breathtaking recovery, thanks to protective laws and conservationists.

• Conservation work with the fisher reintroduction project and research into white nose syndrome in bats will continue in cooperation with the Washington Department of Fish & Wildlife.

Point Defiance Zoo & Aquarium is open from 9:30 a.m. to 4 p.m. Thursdays, Fridays, Saturdays, Sundays and Mondays during the winter season. Northwest Trek Wildlife Park is open from 9 a.m. to 3 p.m. Fridays through Sundays. Both zoos will be open on Monday, Jan. 21, for the Martin Luther King, Jr., Day holiday.
For more information, go to www.pdza.org and www.nwtrek.org.
.
###

Point Defiance Zoo & Aquarium, the Northwest’s only combined zoo and aquarium, practices and promotes responsible stewardship of the world’s resources. The zoo is accredited by the Association of Zoos & Aquariums (AZA) and the Alliance of Marine Mammal Parks and Aquariums (AMMPA).

Northwest Trek Wildlife Park, accredited by the Association of Zoos & Aquariums, is a 725-acre zoological park dedicated to conservation, education and recreation by displaying, interpreting and researching native Northwest wildlife and their natural habitats. The wildlife park is a facility of Metro Parks Tacoma and is located 35 miles southeast of Tacoma off State Highway 161.