There’s a new bald eagle at Northwest Trek. Just outside the entry to the Eagle Passage habitat, a larger-than-life-size bird perches on a tall snag, wings spread. Like many an eagle, it stares into the distance, motionless. But this bald eagle won’t ever grow old or weaken. Cast in bronze, it immortalizes the iconic American birds that call the wildlife park home – and stands as a tribute to the human donors who made their habitat possible.

“This is a project very dear to our hearts,” says Cathy Torgerson, president of the Northwest Trek Foundation which raised the $500,000 funding to build the habitat that opened in 2019. “The Foundation board is very excited to see it installed for our community to enjoy!”

The first anniversary of Eagle Passage occurred during the Covid-19 pandemic in 2020 – a difficult time to celebrate together. So this year, to celebrate the second anniversary, the Foundation commemorated both habitat and donors by commissioning local artist Ed Kroupa to create a sculpture.

“Art is a very powerful way of telling stories,” explains Desiree Kennedy, the Foundation’s development manager. “This sculpture will be a lasting tribute to the exhibit, and the species in general.”

The eagle sculpture, officially unveiled for donors on August 19, was created by Ed Kroupa, Tacoma artist and owner of Two Ravens Foundry. Kroupa, who grew up by the Pacific Ocean, has a deep artistic connection to wildlife. His public art includes “Floating Life Forms,” six bronze buoys with sea life covering them installed along the Foss Waterway esplanade, and his commissions range from frogs to octopuses to honeybees.

“I never thought I’d be sculpting a bird,” says Kroupa. “But it was such a thrill, honestly.”

The process of making the eagle sculpture took months, and began with a photo selected by the Foundation. After many hours researching eagle photographs from all angles and talking to keepers, Kroupa then carved a foam version, just larger than life-size, and sculpted on a clay layer with every feather detailed.

“That was the most challenging part – the amount of feathers an eagle has!” laughs Kroupa. “It took a whole week to do them all.”

Board members and staff from the Trek Foundation visited to check on the work. Kroupa then applied a liquid silicone to create a rubber mold, then encased that in a plaster mother mold to hold it in place. Using the lost-wax technique, Kroupa created 13 wax patterns, made a ceramic shell around them, then melted out the wax to create the final ceramic molds for casting.

Finally, Kroupa and his team poured bronze into the ceramic mold pieces to form the sculpture, welded them together and retextured the patina. A final step was painting the eagle’s tail, neck and head feathers white.

“I wanted it to be as true to life as possible,” says Kroupa. “And I’m really happy with it.”

Then came installation. Jake, horticulturalist at Northwest Trek, selected a special snag of old-growth Douglas fir from the Free-Roaming Area. Around 110 years old, the tree’s center had remained dense and solid, resistant to rot.

Jake sculpted the snag and cemented it around rebar to make a secure post for the bronze eagle. Lifting the 300-pound sculpture into place took an excavator and several members of the maintenance team. Jake then sanded and carved the post so the eagle’s talons and tail fit flush, hiding the three 18-inch-long bolts that secured the sculpture into the snag. Jake also applied vinegar soaked in steel wool: The mixture’s chemical pH reacts with the tannins in the wood to age it a deep brown.

“We’re very proud to have this artwork grace the entry to Eagle Passage,” said park deputy director Rick Dietz, as the sculpture was put into place. “Not only does it deepen our connection to this magnificent species in a tactile and visual way, it honors the conservation commitment shown by the many supporters who made Eagle Passage possible.” 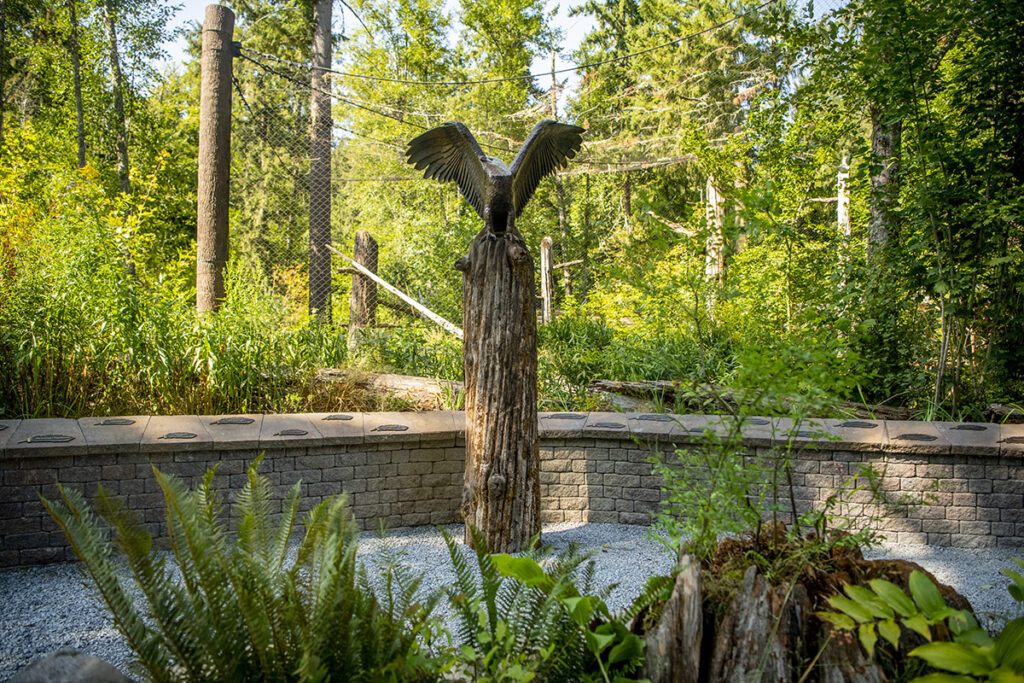